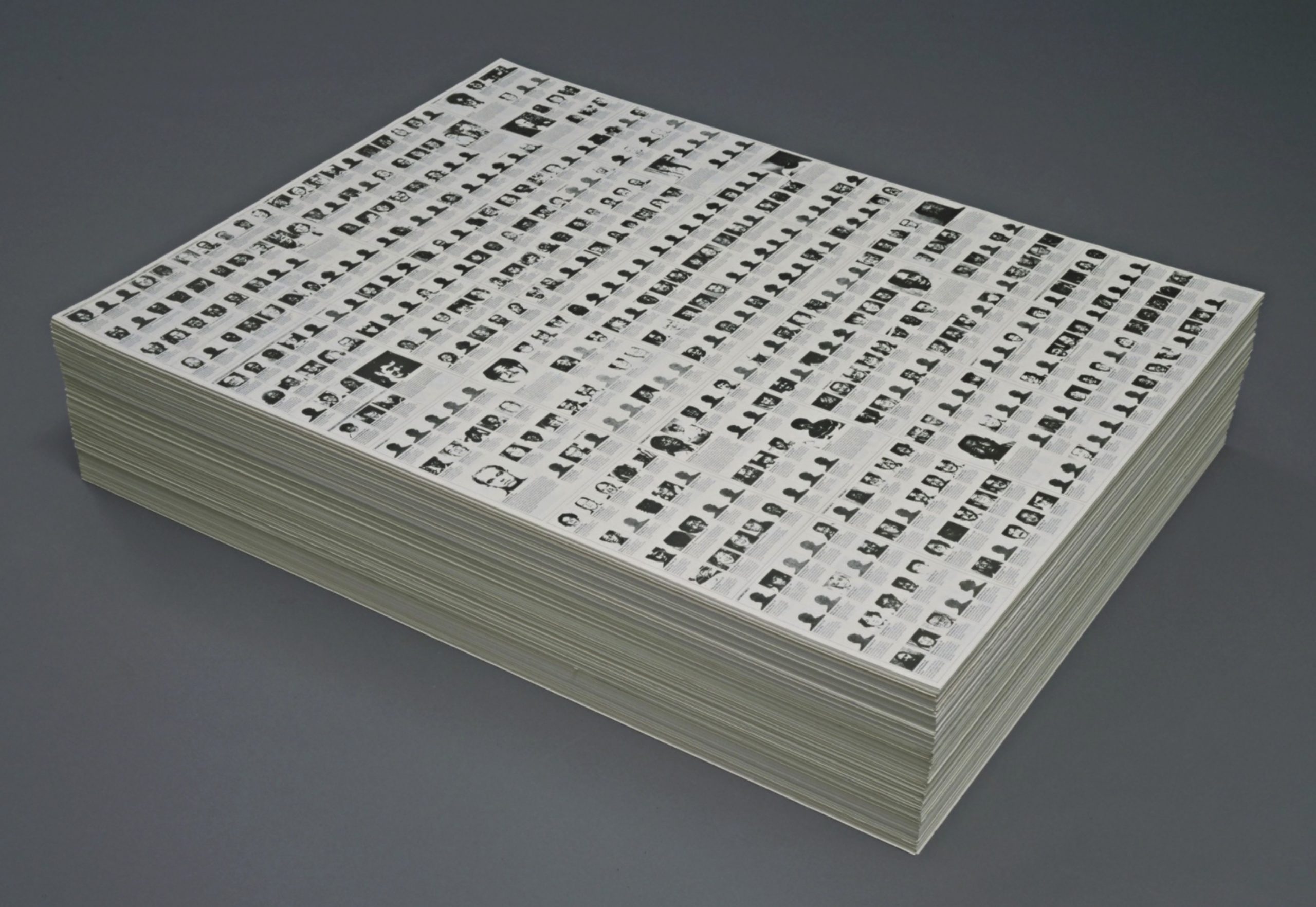 Featured image: Felix Gonzalez-Torres,“Untitled” (Death by Gun), 1990. Print on paper, endless copies. Visitors are welcome to take a piece of paper from the stack that displays images of the 460 victims of death by firearm in the U.S. during one week in May 1989. Courtesy of the Collection of The Museum of Modern Art New York, purchased in part with funds from Arthur Fleischer, Jr. and Linda Barth Goldstein.

Snapshot is a Sixty column that takes a quick look at art history as it happens in Chicago. We send artists and organizers six short and sweet questions to tell us about what they are doing right at this moment. For this feature, we sent a few questions to Karen Irvine, chief curator and deputy director at the Museum of Contemporary Photography (MoCP). American Epidemic: Guns in the United States features the work of ten artists who look at the legacy of guns in our country from a variety of perspectives. Irvine explains some of these artistic approaches in the interview below.

Sixty Inches From Center: What was the inspiration for American Epidemic?

Karen Irvine: At the MoCP we don’t shy away from difficult topics, and gun legislation and ownership is one of the most pressing issues of justice in this country, one that has unfortunately become more urgent during the pandemic, as 2021 is on pace to become one of the deadliest years in decades in terms of gun deaths and injuries. Furthermore, the United States is an anomaly worldwide in terms of gun ownership, with 120 firearms per 100 residents. This statistic is far beyond other countries, and unfortunately, there is a correlation between the number of guns and the number of deaths and injuries by gun. We knew of so many artists making excellent, important work relating to guns, that eventually we had a list of works that we thought would illuminate critical aspects of the issue in ways that are very different from what we see in popular culture and mainstream media.

SIFC: What artists are featured and what would you like to tell us about their work?

KI: The exhibition features works by ten American artists, all of whom are looking at the impact of massive gun ownership on our country. There is some earlier work in the show, including pieces by Renée Stout, Nancy Floyd, and Felix Gonzalez-Torres from the 1990s that demonstrate that widespread gun deaths and injuries is not at all a new issue. Other artists like Zora J. Murff and Stephen Foster are looking at the reasons why people of color are disproportionately affected by gun deaths and injuries, due to disinvestment in communities, poor legislative decisions, and severely inequitable systems. Deborah Luster’s work captures quiet cityscapes where violent murders have occurred, and Hank Willis Thomas and Kambui Olujimi (who made a video together) and Renée Stout look at the indoctrination of American youth into gun culture through toys. Carolyn Drake and Stephen Foster are both interested in exposing the need for criminal justice reform. Felix Gonzalez-Torres’s work helps to illustrate that by far the most gun deaths in this country are the result of suicide, and Andres Gonzalez’s project American Origami addresses mass shootings in schools, which despite being the gun incidents that get the most attention from the media, rarely lead to meaningful gun reform.

SIFC: In what ways do the artists and/or artworks connect to the city of Chicago?

KI: Both Zora J. Murff and Stephen Foster’s works were inspired by incidents of murder by gun in Chicago. In Murff’s case, it was the 2014 killing of Laquan McDonald by police officer Jason van Dyke, which led Murff to want to uncover the cyclical layers of history and systems that perpetuate violence against Black people. Foster’s video is a tribute to Robert “Yummy” Sandifer, who at eleven years old was killed by a gang member in Chicago in 1994. His murder led to the passage of what has come to be known as “The Crime Bill,” which instead of addressing the root causes of why people of color are disproportionately affected by gun violence, led to increased incarceration rates for Black men and youth.

SIFC: Who is this show for and who needs to see it? What mark would you like to leave on your audience?

KI: The opening quote of the exhibition essay is by a mother, Nicole Hockley, who lost her six-year-old son Dylan in the Sandy Hook tragedy. She says: “Even if it’s not happening in your community, it’s happening in the community of America.” In that spirit, this exhibition is meant for every American, who will hopefully come away with a greater appreciation of how we got to where we are today as a country that leads the world in terms of gun ownership and yet has relatively lax gun control laws. I also hope viewers will be prompted to reflect and have critical conversations about gun legislation, and maybe even be inspired to take action.

SIFC: Were there any challenges you had in creating this exhibition?

KI: The material and topics these artists are dealing with are very difficult. It is easy to get outraged when one thinks about the amount of unnecessary gun deaths and injuries Americans are coping with every day. Also, the issue is very complex and in the news every day, so it is hard to stay abreast of developments and to sort through the endless number of statistics and ways to view the issue. Finally, most of the artists in the exhibition are activists heavily in favor of gun control reform. It was difficult to carve out space in the exhibition for differing opinions, which the work of Nancy Floyd so poignantly does, as she illustrates the emotional attachment many Americans have to guns and the ways in which the United States is very much a gun culture. Many gun control experts agree that understanding these viewpoints will be key to achieving ambitious gun control reform.

SIFC: Describe one piece in the show that you think everyone should see.

KI: All the work is incredible, but the Felix Gonzalez-Torres stack of sheets registering a week of gun deaths and injuries in the United States in 1990 is very moving. By making the statistic visible, it really brings home the extent of the issue, as well as its long-term consequences for our country. Plus, it is extraordinary in that it invites the viewer to take a sheet away with them, forming a sort of transportable memorial. This active engagement with the work is unique, and means that the work can have a life well beyond the museum walls, perhaps allowing others to experience it, or function as a reminder to the viewer of the issue long after they’ve left the space. The stack of sheets is constantly replenished and never ending, much like the tragedy of gun deaths and injuries itself.

American Epidemic: Guns in the United States will be on view at the Museum of Contemporary Photography from September 10, 2021 to February 22, 2022.