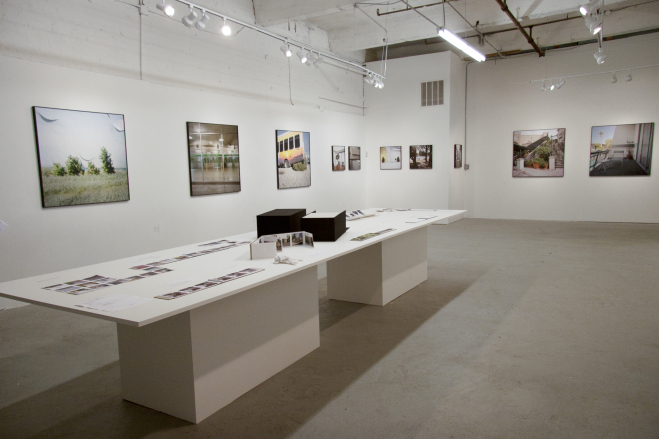 Johalla Projects is an art space in Wicker Park run by three curators, Anna Cerniglia, Caitlin Arnold, and Melissa Marinaro. It opened in fall of 2009 and serves as a venue for emerging and mid-career artists. On Friday, November 8th I sat down with Anna, the director, to gain a better understanding of Johalla’s structure and mission.

How did Johalla Projects first come together?

When I started this, I only wanted this as an office to have all of our curatorial practices kind of based out of. But then we just started having more shows and more focus placed on us, so we started making it more of a

gallery as time went on. We still use it as a home base because we do other projects besides what we have going on here.

Now, this is more of a project space and I think now we’re trying to turn it into an S-corp, as we have more liabilities on us. And we’re doing bigger shows and starting to gather more artists.

How does Johalla function? How is the space run?

Is that so you can have the flexibility of not being bound to a group of people?

Yeah, that and I don’t want to be solely responsible for their financial income. I think that artists when they’re represented have to give a percentage to one gallery, a percentage to another gallery and they can fall short. And we were all artists on our own before we became curators. Because I come from that background I think I’m a little more considerate about what an artist needs to work and live. Now that we’re getting more commissions and we’re working bigger and having more shows, we’re going to have “relationships with artists”, but I’m not looking to represent anybody.

What’s the split then?

Thirty percent, though “Wild Card” is 40/60 because it’s three curators and most of [the artists] are out of town, so we have to ship everything back.

What would you say the central mission behind Johalla Projects is?

We’ve become a haven for emerging artists. We work with a lot of urban artists, a lot of fine art artists, I think we’re just trying to work within the whole spectrum of artists. Before we had this show we had a solo show for Montgomery Perry Smith that was extremely fine art. This one’s a little different. The one after will be back to being more fine art. We interchange because there’s much more art than just one genre of it.

There are some artists that only work for bands and others who do conceptual work, but it doesn’t make their work any different. They’re both going through the same process.

So, what’s your curatorial background? What got you into curating?

I have my BFA in photography and my last semester of college I got invited to run South Union arts, with Bryan Peterson. My last semester we decided to open up a space together; he said he would fund it. So, he found a church. We rented a church for three and a half years. He fell upon it. It was really cheap, really alternative. He just wanted a place to do shows at. It was 18th and Union. It was crazy.

That’s where I made a lot of my mistakes, but I learned a lot about business. It was the perfect place for me to kind of learn a lot about working with artists. We worked with artists all over Chicago, so I built a lot of relationships.

Do you feel you have any specific curatorial approach?

I think because I was an artist who turned into a curator I think a lot differently than curators do. I don’t have a style, so I really can’t say. I think I’m still trying to figure that out.

How do the three curators at Johalla normally work together?

Caitlin, Melissa, and I all have similar backgrounds, but we all work really differently. Caitlin’s really fine art. Melissa’s more conceptual. I’m more urban. So, it’s a joint effort between the three. We really balance each other out. We interchange the months.

If there’s a big project that comes up, like if we have murals or whatever – we all have powwows. We work well together; we care about each other.

How do you feel about Wicker Park as an arts district?

I think everybody was afraid of Wicker Park and running away from it, but it’s still an arts neighborhood and there’s a lot of support for it. So, when I got this place we got a lot of support very fast. Now we work with the neighborhood, the aldermen. It’s a really great thing.

So, where do you see Wicker Park headed?

Johalla is currently featuring “Wild Card” an exhibit of twenty-one artists who each portray one image from the Tarot deck’s major arcana. It runs through October 31st.