How do we visualize what we cannot see; things that are scientifically proven to exist but are unable perceive with the naked human eye? Photographer, Jeremy Bolen uses his photographic process, a combination of science and art, to explore the unseen realm. In this interview we discussed his interest in the unseen, a bit of physics, some visual theory, and much more.

Kate Korroch (KK): What inspired your interest in artistically documenting the unseen?

Jeremy Bolen (JB): I guess it kind of began with an interest in exploring the apparatus. To create a site specific apparatus that could have a more intrinsic relationship, or collaboration, with the space or non- space. From the very beginning photography has been about capturing the unseen, about creating a different way of seeing, a new mode of observation and documentation. I have been rethinking the potential of the document and trying to create a more comprehensive, poignant document- a document with greater presence, a document incorporating the ontological. I spent some of my childhood living near Fermi-Lab, and when I was in high school my band practiced across the street from Fermi. The idea of particle collisions and trying to record what is not visible to the human eye is something I have been considering for quite a while, the nature of nature and the similarities between High Energy Particle Physics and Artistic Practice. 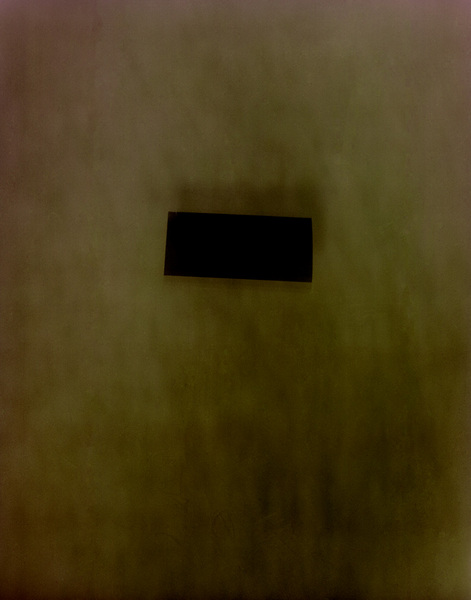 Jeremy Bolen in Collaboration with Dr. Stefan Vogt, “Sheet of Film Covered with a Small Piece of Lead and Left Next to the Advanced Photon Source for Two Weeks,Argonne National Laboratory, Argonne, IL” 2012. Image courtesy of the artist.

KK: When you say “the apparatus” do you mean the camera?

JB: Sort of. Simply put it is the device used to translate light and energy into a different kind of information. At times it is a “camera” of sorts, but at other times it is a river, lake, the ground, the US postal system, humans.

KK:  Your work is now currently showing at the Hyde Park Art Center in the group exhibition Ground Floor. I was particularly drawn to your piece “In Five Directions, Above the Tevatron Particle Accelerator, Fermi Lab, Batavia, IL” (2011). I must confess, though I was drawn to it, I still had to do a bit of “Google-ing” to learn what “Tevatron Particle Accelerator” means. When I approached the piece my immediate thoughts were directed towards ideas of vast space, the paranormal, and hay bales. I was drawn to the work aesthetically and then inadvertently created a story about the unknown. What do you expect of your audience when presenting these creative and sometimes abstract works with scientific subject matter?

JB: I really don’t have concrete expectations for the viewer, but the detailed account of your experience is wonderful. That the piece was engaging enough for you to do some research, that gave you a glimpse into my research, which in turn brings you to a sprawling, endless field of ontological and epistemological inquiry. Beyond that, the unfamiliarity of the photograph made you engage with the image as a projector rather than a mirror representation. But what is truly amazing about your interaction is that the image was made by capturing five visible perspectives at once (along with a number of possible invisible phenomena) and you seem to have been able to talk about many elements that were actually documented. I should also add that I don’t see any of my work as abstract. What is truly abstract is the invisible. 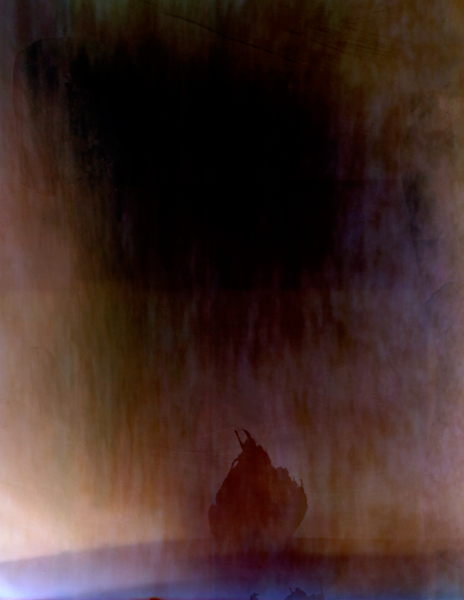 KK: Also in Ground Floor you present a series of diptychs such as “Above/Below ground and In the Fox River at NPL-8 (remnants of radium dial company)” (2012) which is composed of a traditional archival print and river sediment. What is the relationship between the two prints?

JB: I am very interested in exploring relationships between objects created and, in general, the fact that a connection has to be considered. I think of it as a sort of image collision, where two moments of time and space/non-space are represented using two different recording processes, and modes of presentation. We become more aware of perception and travel outside the frame. Vision is slowed by the prints not actually colliding, so the collision has to take place in the viewer.

KK:  Can you talk a bit more about the “altered viewing experience” you create by adding elements such as dirt and sediment to your work?

JB: I am very interested in the tension between the visible and invisible. I am also very interested in Niels Bohr and his theory of complementarity (simply put the apparatus you use to record phenomena is just as responsible for the results of the phenomena you record). So, in some of these newer projects I am incorporating the material somewhat responsible for creating the image as part of the object. It also becomes a first order experience for the viewer as you are dealing with the actual, not just a representation of the actual. I am also interested in how the images will now evolve due to their now permanent interaction with the other materials.

KK: Your work makes me more aware of the relationship between the human eye as a lens and an actual camera lens or even a microscope–it highlights what we cannot visually perceive, even with something as simple as light and dark. Do you see your artwork as something that expands your audience’s visual vocabulary?

JB: Well put. Perhaps. How does vision shape knowledge? What do you think? Walter Benjamin wrote about the optical unconscious, and I think some of this work is acting in line with that theory.

Jeremy Bolen, “Above/Below Ground and in the Fox River at Npl-1
(Remnants of Radium Dial Company), Ottawa, IL,” 2012. Image courtesy of the artist.

KK: Absolutely. I love that you brought Benjamin into this! Speaking off the cuff, I’d say our senses, vision being the primary one we’re discussing, shape everything but that what our senses are telling us is not necessarily true or false—it is unknown. Can you elaborate a bit on the “optical unconscious” especially in regard to your work?

JB:  We can only perceive a very small amount of the electromagnetic spectrum. To make invisible phenomena visible through recording with photographic film increases social consciousness of phenomena we may be affected by, but have no way of seeing with our eyes.

KK: Last summer you began a long-term project in collaboration with CERN (European Organization for Nuclear Research), can you tell me a bit more about that project and what drew you to working with them specifically?

JB: Well, I don’t want to talk about it too much, simply because none of the work has been shown to anyone yet and I don’t want anyone to enter the work with more pre-conceived notions then they already may have. The Tevatron particle accelerator at Fermi Lab was closed in September of 2011. The only serious particle accelerator left in the world is at CERN. The Large Hadron Collider (LHC) is also the largest machine ever created: an underground circular tunnel spanning 17 miles underneath parts of France and Switzerland. The LHC has had major breakdowns. It has come close to possibly discovering missing pieces of the standard model. There are lawsuits from surrounding communities about possible black holes being created by the LHC. The Big Bang has been recreated and recorded there. I lived there for a while this past summer and created a new body of work. I am fairly certain that the work will be shown at Andrew Rafacz in February 2013. 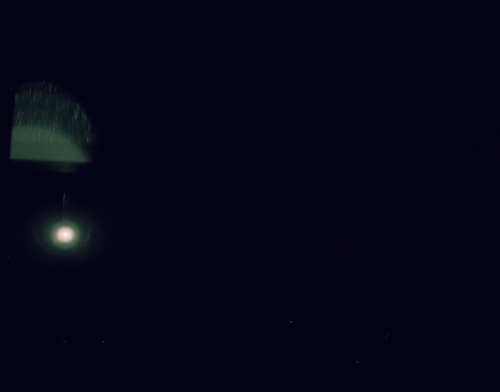 KK: I’m looking forward to seeing that work! What a fascinating place to spend a summer. Is your relationship with CERN at all political or does it bring political elements to your artwork?

JB: I am not sure I would want to declare that kind of thing, as I want to give the viewer space to create their own experience with the work. I am pretty sure that most of my work has some political underpinnings……