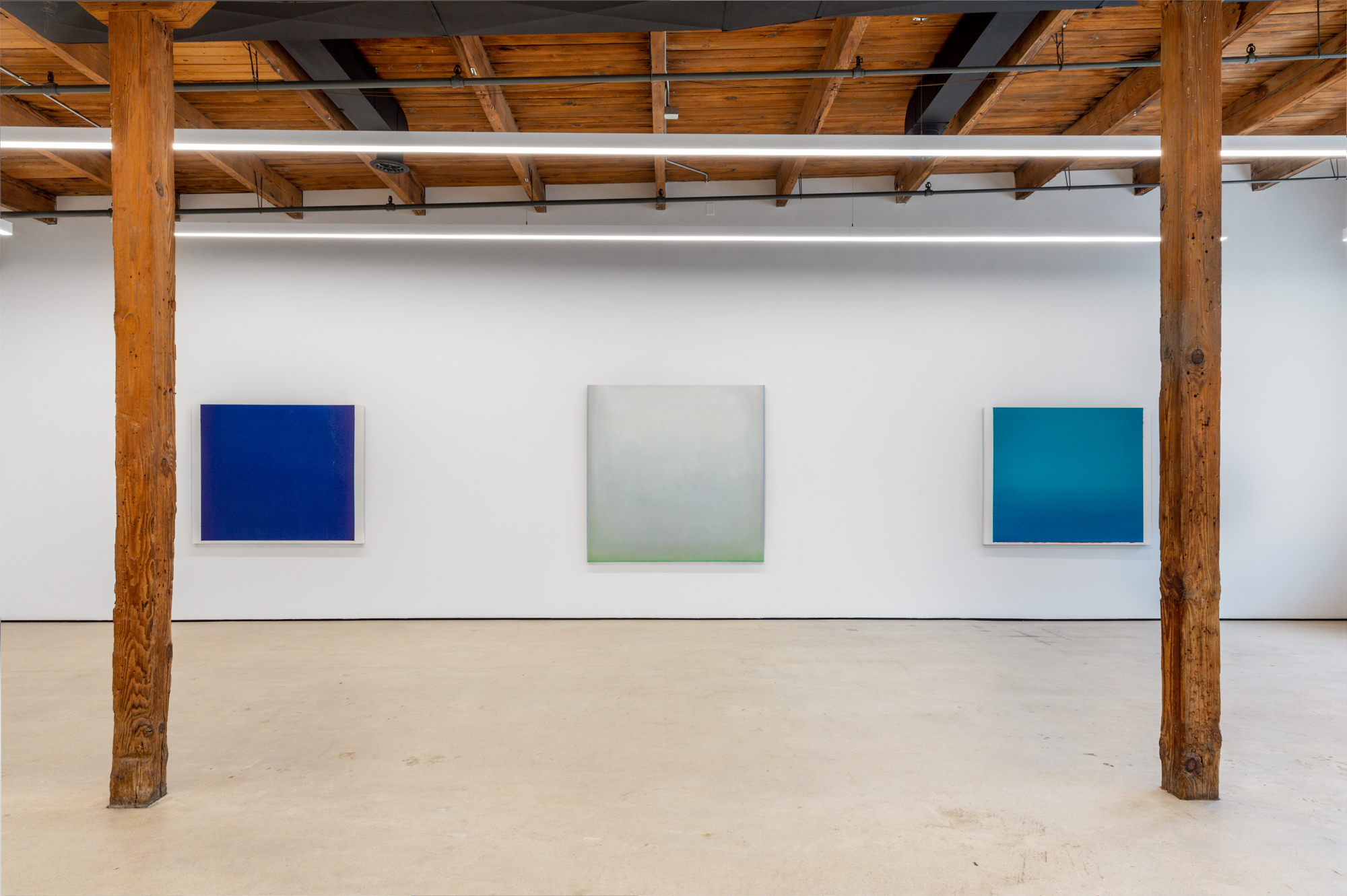 Any other time, it would go without saying, but in 2021, it’s worth mentioning that art is best seen in person. As we inch toward a return to normalcy, we exist in a half-in, half-out lockdown world, leaving us trapped in a sort of art show purgatory. Do we roam the viewing room online first? Do we go in sight unseen? Or perhaps we just do a little peek at the viewing room on the bus on the way to the gallery. To address those concerns directly, The Blue that embraces me… is a show you must see at the gallery. You can, of course, glance or pour over the online installation views here, but for that oomph, that deep breath of cleansing air, the show can only be seen in person.

The brief show at Mariane Ibrahim Gallery is made up of six works by Sergio Lucena. Although blue hues are present throughout, as the title suggests, each canvas is an exploration of a range of colors. Lucena’s paintings all follow a similar theme: canvases engulfed in deep pigments. Seemingly straightforward, the show’s simplicity is a gossamer veil, which is why you have to see it in person. The paintings showcased in The Blue that embraces me… are conceptual, but they are also approachable in the sense that the vastness of each canvas encourages the viewer to get up close to see its components. Here, you are able to look past the obvious in the deceptively monochromatic works and perceive the layers of paint in real life. You must be face to face with the works to recognize the appealing evenness of the canvas and appreciate the seamless gradation between the blues and whites, the whites and greens, and the greens and grays. You need to experience the seepage of paint around the edges, the bubbly leaks of color that peak out and contrast against layer after precise layer. You have to see all of those little details up close and intimately to remind you that it’s all deliberate.

The exhibition works beautifully as a solo endeavor for Sergio Lucena; all of the pieces as a unit allow for a meditative exploration of each piece without disruption. Viewing it alone enhances that feeling, allowing time to be contemplative and reflective in front of each work. Since I rarely had a reason to leave my house in recent months, I found myself wanting to stand and look at each piece for hours, to be overwhelmed by the blueness of it all. I wanted to consume the canvases inch by inch, scour every detail, making sure not to miss a single thing. It wasn’t unlike the feeling of desperately trying to commit every detail of a fond moment to memory; the futile effort of attempting to catalog every second, only to recall it later as a hazy memory, almost a dream. However, in the beautiful gallery space, it’s easy to picture a shift in tone and imagine the very same exhibition playing host to the opening nights of our collective past lives. Bright lights, white walls, the door flung open to the streets, and the gallery filled to the brim, buzzing on a Friday night. Lucena emphasizes, “The emergence of vertical axis marks a fundamental change in my trajectory, based on the perception of a connection between the earthly and the heavenly, the concrete and the sublime.” For me, this connection is most evident in the concrete, earthly moment of reflection while gazing at the canvas in front of me, which is complemented by the sublime, heavenly moment of imagining a return to the world we once knew. A reality that is tantalizingly close yet still out of grasp.

Mariane Ibrahim’s website proclaims, “The Blue that embraces me…highlights the silent essence that illuminates the memory of such things that, individually and intimately, bring us back to ourselves.” And what a time to reflect on memories and be embraced by blueness. We’ve just passed the one year anniversary of the pandemic and some of us, (this writer specifically) are just beginning to reckon with the PTSD of 365 straight days of vacillating melancholically between feeling claustrophobic and agoraphobic. Of course, blue and melancholy go hand in hand. Blue is such an interesting concept and according to surveys (going as far back as 1941), it’s the most popular color in the world. Like the rest of the colors on the visual spectrum, blue is nothing more than reflected light that enters our eyes and is perceived by our brains. As a primary color, it’s a vital ingredient in our visual world, and as an emotion blueness is like a malaise or an unplaceable sadness. Those definitions aside, there is something plainly magnetic, almost irresistible about the color. It elicits a depth of emotions evidenced by the many poems and essays pondering on its identity and philosophical meaning. Perhaps humanity’s affinity for the color can be attributed to an evolutionary holdover from our prehistoric ancestors who were theoretically drawn to the color because it also meant water. Whatever it is, blue uniquely overwhelms, it envelops. You can drown in its depth or be buoyed by its lightness. In his six canvases, Lucena explores the entire spectrum, literally. The blueness at the center of The Blue that embraces me… coupled with the memories of happier times left me with a lingering sadness that was almost sweet, stirring a feeling of blueish nostalgia, flecked with little bits of hope.

Sergio Lucena: The Blue that embraces me… is on view at Mariane Ibrahim Gallery through April 10, 2021.