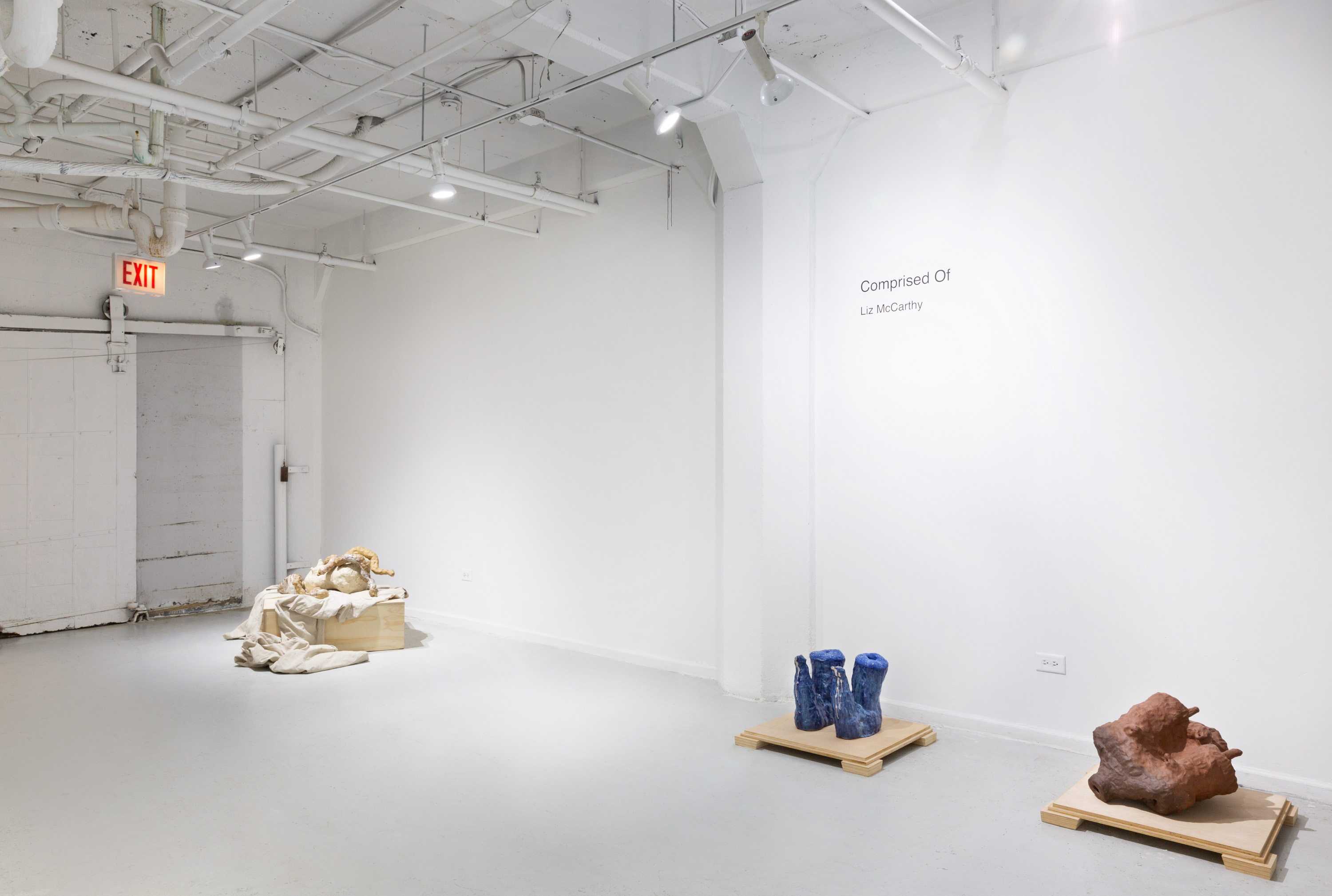 I meet Liz McCarthy at her exhibition, Comprised Of, on the first day of October. Gusts of wind slap against me as I walk from one end of the parking lot to the other, where Liz is waiting to lead me inside. I awoke congested, my head and body heavy with pollen, stress, or both. Behind my mask, I feel my nose beginning to drip from the cold air, my eyes already streaming. Liz tells me she also feels congested—heavy with stress—as we walk against the wind and into the arts building.

Inside the gallery, I am met with a show that builds on McCarthy’s exploration of ceramic whistles and the vulnerability of bodily forms through the medium of clay. Perhaps, it’s more fitting to say the show disassembles this exploration into multiple inquiries. The ceramic works on view are humanoid forms, standing, drooping, sprawled, and, in many cases, pulled apart. As we walk through the space, McCarthy’s reflects on her job at an auction house and its influence on her thoughts about objects and how we value them. It is notable that the pieces are glazed, as McCarthy often leaves her clay sculptures bare, but the glazes are intentionally imperfect, bubbled and mottled, challenging notions of finish and preciousness. The show’s title speaks to the idea of a box lot, McCarthy explains, where objects that aren’t quite valuable enough on their own are grouped together into a miscellaneous collection of items to be sold as a unit. “I think about the way I create hierarchies in my own body,” McCarthy says, “and about the idea of usefulness, how I put value on different parts, how I obsess over different parts.”

Whether assembled together or left as isolated pieces, the works are visceral explorations of how bodies, like objects in an auction house, can be deconstructed, measured as instruments, valued for certain parts, or neglected as something whole. As modular pieces, in which limbs, torsos, and heads can be disassembled and switched with others, the sculptures seem to exist in a delicate balance between discrete objects and something else—something that feels living and a little bit messy, as living often is. Bodily parts, including a pair of tentacle-like arms, a head, and exaggeratedly curved boots, rest on low plinths throughout the space, like tiny stages. A subtle theatricality is most apparent in two separate forms, each sprawled on plain wooden boxes, reminiscent of shipping crates, with fabric that could be packing blankets or drop-cloths collapsed at the base of each. The appearance of each upward-facing “figure,” feels vaguely post-coital with their limbs tangled, multiplied, and contorted.  The work is exhausted and satisfied, bearing a reminder of the body’s subsequent weight and fragility.

Throughout the show is the acknowledgment of an exhaustion that comes from keeping things together and from letting things collapse—a desire to contain and release that is always expanding and contracting. In a new series of small ceramic torsos, collectively titled Whistle in Respite and installed on two separate shelves in the space, we see the bodily fragments slumping and reclining, contorted and folded onto themselves. The openings that exist where a head or limbs might attach make them strangely vascular, pumping air instead of blood. And indeed, when McCarthy blows into one of their tiny openings sending a high-pitched note through the space, I’m reminded that they are in fact tiny organs, in more than one sense of the word.

As I leave the gallery, I think of the pollen, or stress, that has been clouding my head, leaving my body feeling like an unruly thing that contains me, rather than the other way around. I think of what McCarthy says when she describes the weight of bodies, a material presence that betrays our porousness. We are probably closer to whistles than we realize; air is forced through us and shared between us. If our recent months of isolation have taught us anything, it’s perhaps that we are comprised of much more than we can feel, from the tiniest microbes on our skin to those in our breath; isolation acknowledges how thin the membrane is between our bodies and others. It’s not so much that it’s a comfort, but it’s something to live with.

Compromised Of closed on the 10th of October.

Featured Image: Installation view of Compromised Of, at 062 Gallery. Three pieces are on the floor. The two on the right are resting on wooden stands and the piece to the far left is more elevated on a wooden box. From left to right the pieces are colored cream, blue, and dark red. The wall and floor are white with the exhibition text on the wall. Photo by S.Y Lim.

Elizabeth Lalley is a Chicago-based writer, independent curator, and the assistant director of Goldfinch Gallery. She received an MA in Museum & Exhibition Studies from the University of Illinois-Chicago, and holds a BA from the University of Michigan where she received the Academy of American Poets Award. Elizabeth has worked for the Chicago Artists Coalition, the Smithsonian Center for Folklife & Cultural Heritage, and the University of Michigan Department of English. She was recently a Curatorial Fellow with ACRE (Artists’ Cooperative Residency and Exhibitions) and is a contributor to Newcity and Chicago Artist Writers.