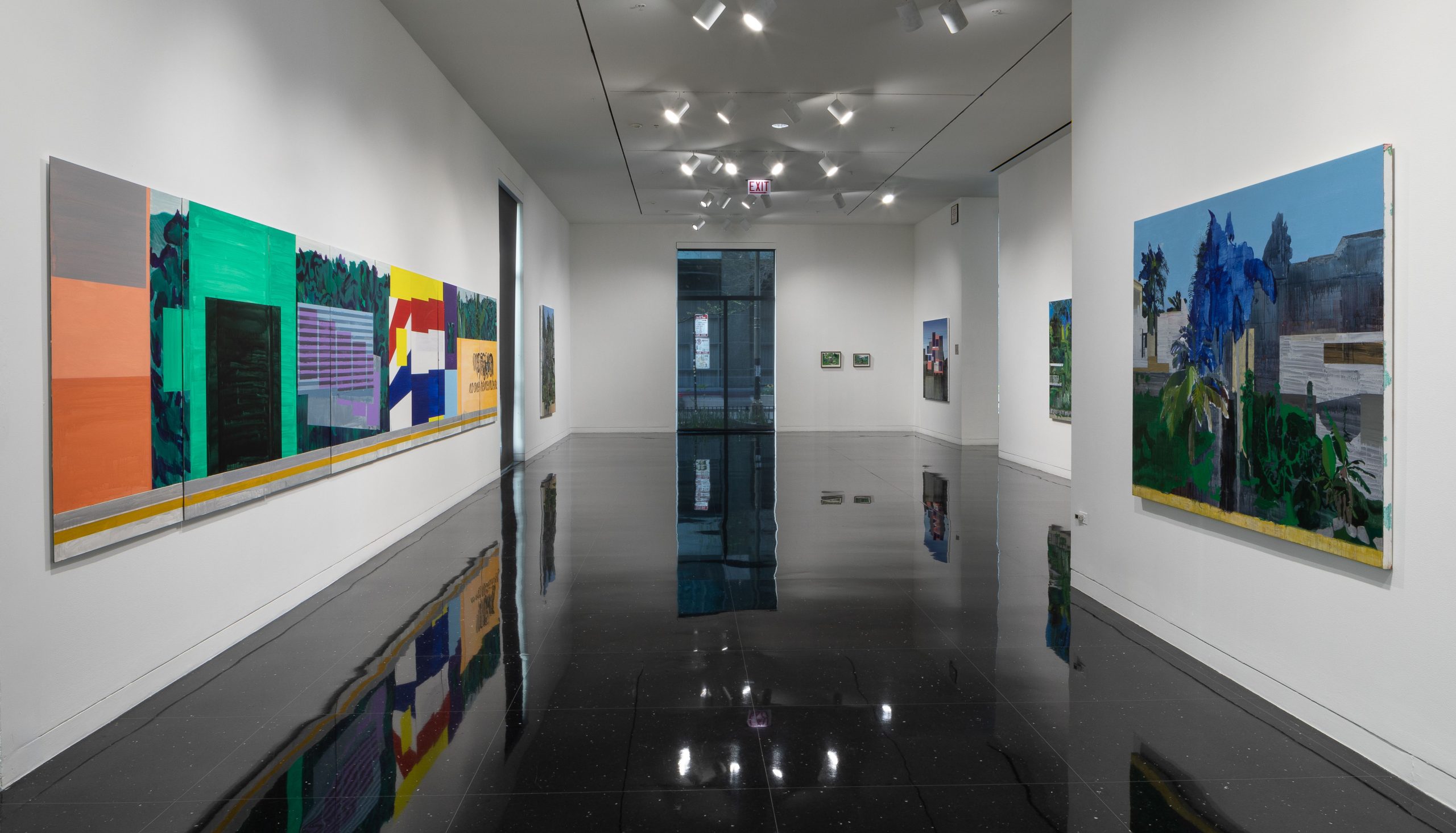 To contemplate identity among the African diaspora is to consider a multiplicity of histories, traditions, memories, and identities that sometimes seems to contradict each other. Blackness is an identity, but it’s also a complex and multifaceted experience. Members of the African diaspora encapsulate a myriad of cultures that bear some resemblances, yet are also vastly different from one another. Afro-Brazilians in South America are different from African Americans, who are in turn different from Haitians in the Caribbean. In his series of lush and vibrant works, British-born Jamaican artist Hurvin Anderson explores the duality of his country as well as his identity in the exhibition Anywhere but Nowhere at The Arts Club of Chicago.

The global South is home to a large majority of the world’s most marginalized people and paradoxically a number of the world’s most desirable tourist locations. The Dominican Republic, Belize, the Polynesian islands–a lot of these beautiful tropical locales bear the brutal scars of colonial conquest. In these countries ravaged by colonialism, it’s not uncommon to see abandoned buildings and unfinished construction projects left in disrepair. In a collection of expressive paintings and drawings, Hurvin Anderson depicts the ruins of colonialism in his ancestral home of Jamaica and positions them alongside images of the interior lives of the locals that live there. Using photos from a 2017 trip, Anderson takes the viewer to parts of Jamaica that tourists don’t get to see. Most prominent in the collection on view are the paintings of abandoned buildings he depicts surrounded by lush greenery. These large works appear like overgrown graveyards, but the canvases are far from a necropolis. Life springs forward and the vibrant beauty of the Jamaican jungle fills the exhibition space. Like the ruins exoticized in adventure movies, such are the modern ruins of colonialism and capitalism. Anderson captures these remnants and uses these contemporaneous ruins to tell a decidedly different story from the picturesque Jamaican resorts and the stretches of manicured white sandy beaches.

Anderson’s mastery of abstract impressionism juxtaposes precision with loose freehand brush strokes highlighting the contradictions between the expressive flora and the rigid man-made structures. His execution is deliberately imperfect with the movements of his hand present throughout each work. The watery pigments that stream down the canvas like tears contrast with evenly lined bricks or the exact lattice pattern of a fence. The fluidity of this approach allows the paintings to embody the dampness and humidity of the Jamaican climate. The hazy impressionism leaves everything slightly out of focus, much of the minute details lost in translation. The larger canvases fill the entire room yet the smaller works are magnetic in their own right. Here, the artist’s perspective tells the story; Anderson doesn’t paint from memory, he paints from photographs he took from a 2017 visit to the island. These photos act as a stand in for memories, capturing precise details rather than broad strokes. He abstracts these images over and over again in various studies before committing them to larger canvases as impressionistic vistas. In this process, he reveals a sort of disconnect with his ancestral home, while simultaneously demonstrating his love for the country by replicating it over and over again, affectionately committing it to the canvas. At first blush, the smaller works seem easy to breeze by, but I found myself turning around and revisiting them. They look like postcards that have been through the wash, each one like a washed away memory of faraway places.

As a member of the African diaspora, your birthright is the unique feeling of having your identity stripped away as well as the discomfort of having a new identity foisted upon you. Oftentimes, those identities contradict each other. Our sense of self and belonging is shaped in part by our experiences, but also by what identities we inherit from previous generations. For better or for worse, Jamaica has been shaped by its colonial history. That history is inextricable from the identities of Jamaicans. Even now the island nation still remains a member of the British Commonwealth. Understanding that complexity of identity is what allows both rigidity and fluidity, qualities that both show up in Anderson’s work. We all contain dualities and contradictions. The Jamaican jungle presented by Anderson reminds us that what is suppressed will eventually push its way through.

Hurvin Anderson: Anywhere but Nowhere is on view at The Arts Club Chicago from April 9 – August 7, 2021. The exhibition was curated by Janine Mileaf.

Featured image: An installation view of the exhibition Hurvin Anderson: Anywhere but Nowhere at The Arts Club Chicago. Several paintings can be seen hung on white walls in a gallery. Most of the paintings show green, lush foliage. The painting on the lefhand side is long and full of various bright colors. Image courtesy of The Arts Club Chicago, photo by Michael Tropea.