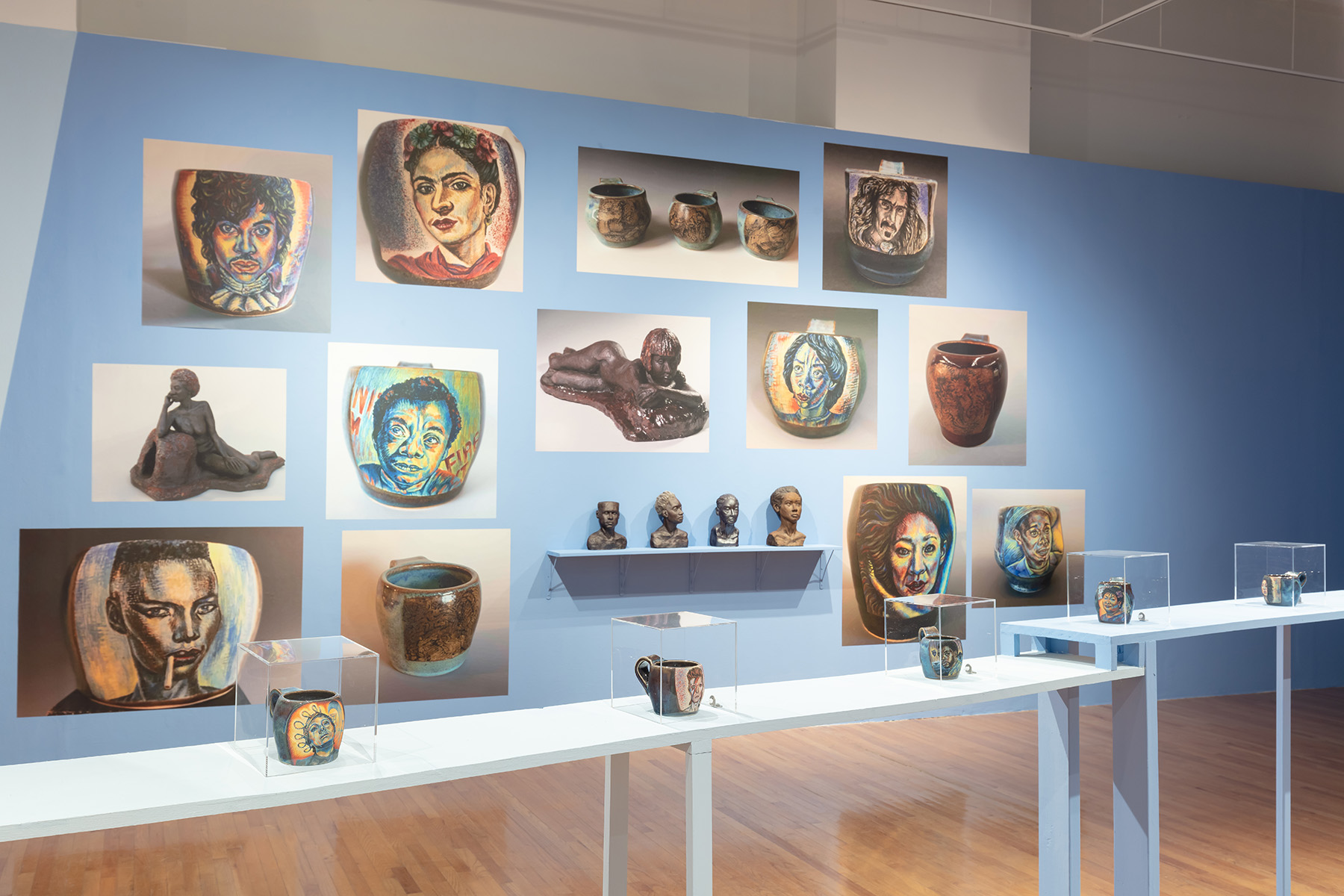 They say you die twice, once when your soul leaves the earthly world and again when someone utters your name for the last time. Gravestones, portraits, and hashtag campaigns all exist in an effort to ward off that final death. Employing her range of skills in traditional portraiture, performance, and ceramics, artist Cristal Sabbagh explores memorials, death, ancestral ties, and pop culture with her show OOPS! POW! SURPRISE! at Glass Curtain Gallery.

Upon entry to the main space, you’re greeted with three swirly, angelic memorial portraits: Justice for Iyanna Dior, Justice for Tony McDade, and Say Her Name Oluwatoyin Salau. Stylistically reminiscent of airbrushed T-shirts, each portrait depicts a person who was killed around or during the Black Lives Matter protests and unrest of 2020. Iyanna Dior was a trans woman, Tony McDade was a trans man, and Oluwatoyin Salau was a young woman and activist who was experiencing homelessness; all were marginalized people whose stories were swallowed up in a news cycle that was hyper-focused on the lost lives of Breonna Taylor and George Floyd. As a show opener, the portraits are an immediate gut-punch reminder of mortality and trauma, as the faces of the people have come to represent so much more than the lives they lived. If the show had consisted of these three portraits alone it would have been enough to wrench the heartstrings. Sabbagh bolsters these portraits with a truly multimedia presentation–and there is a lot in it to comprehend.

The show is a cross-section of Sabbagh’s many talents with plenty to see. Spread across two galleries and a screening room, it requires a few walkarounds in order to take in all of its components. To the immediate left of the three previously mentioned portraits is a wall of text that narrates a beautiful story about the artist as a dancer, and also provides some important context for the work. The writing spans seven panels and takes up the entire length of the wall; the sheer volume of the words has an almost insurmountable feeling to them. From there, the focal point in the main gallery is split between a few distinct moments: the portraits that you see the moment you walk in, the back wall, and the six mounted TVs that are constantly cycling through a total of 42 different improvisational dance performances.

Each aspect of the show commands attention simultaneously, which complicates the flow of the space. After the three portraits and wall text, what catches the eye is the back wall, which displays enlarged images of sculptures by the artist and a low-slung shelf featuring four unique busts, which, in contrast, do not portray specific individuals. From there, you’re drawn to individually crafted ceramic mugs that feature celebrities ranging from David Bowie and Grace Jones to James Baldwin and Stacey Abrams. The mugs are flanked by more sculptures, this time seated figures, all of which weave through the center of the room. The backroom is a secondary space containing dancers that are projected directly onto the wall, along with a shelf of what at first glance looks like the contents of a merch table: a graphic t-shirt, a tote bag, and a series of standard-issue white coffee mugs printed with Sabbagh’s images of other pop culture figures like Janelle Monae and characters from Schitt’s Creek. The mugs are complemented by a wall of prints, some repeats of the images on the mugs. This tertiary space serves as a screening room for two more projections of dancers that cycle through eight more sequences.

The press for the show states “While movement is the spine of [Sabbagh’s] practice and the core that all her other work emanates from, intentional spontaneity, reverence, and bliss are threads woven throughout.” Without a doubt, this comes through in her lyrical and almost trancelike performances. Unfortunately, the spatial limitation of the galleries and the vast quantity of work prevents the viewer from fully embodying those joyful feelings while seeing the show. The program counts 57 individual pieces, seven panels of text, six monitors, and three projections. The overlapping sounds emanating from presentations in the backroom as well as the TVs filled the entire space. I would have loved to spend time with each one of the sculptures and mugs to examine their craftsmanship. Sabbagh’s striking use of color in her mug portraits as well as her deftly crafted busts that look resolutely past the viewer deserve to be celebrated. But as I surveyed the show, there was a constant tug at my attention from the monitors in my peripheral vision. I was never able to fully immerse myself in the experience.

In OOPS! POW! SURPRISE!, Sabbagh’s works explore a range of subjects and, altogether, it makes for a great examination of her ability as an artist, but a disorienting show. Regardless, there are some great moments in the exhibition worth visiting. Sabbagh’s memorial portraits to celebrities like Prince and Chadwick Boseman, and to everyday folks who were marginalized in their lives and in their deaths, is especially poignant now in a year steeped in mourning. As a global society in the throes of a deadly pandemic, we’re dealing with an extraordinary amount of loss. Black communities are seeing a higher death toll of Black people due to Covid. Couple that with the loss of a number of Black icons, including Kobe Bryant, Chadwick Boseman, Cicely Tyson, and DMX, along with the ongoing murder of Black people by police, we’re in a state of constant public and private mourning. Memorials pay tribute to the dead, but they exist for the living as sentimental yet macabre reminders of the fleetingness of our existence. Sabbagh’s memorials, from the coffee mugs to the tote bags, are meant to be used, enjoyed, and cherished. Each one is a beautiful tribute to life.