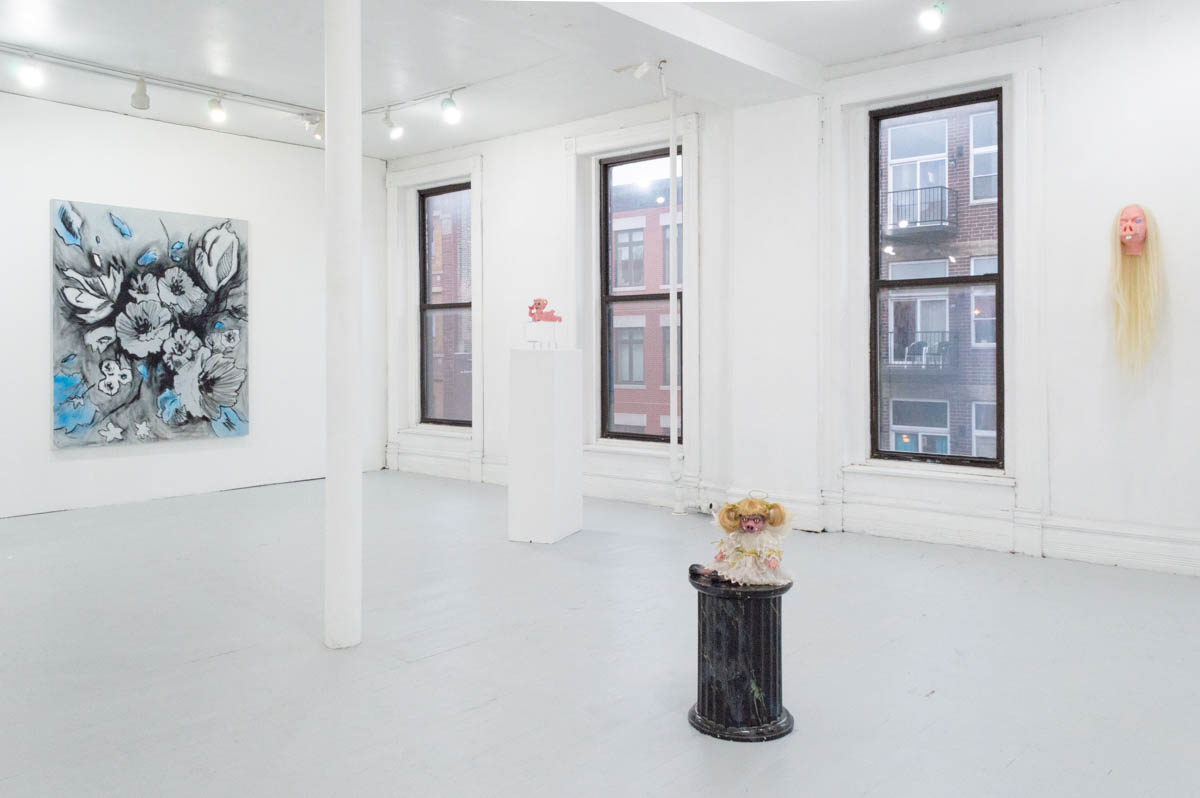 “He just can’t get enough of you and literally drools in your presence,” reads a Cosmopolitan article from 2016 titled “15 Signs You Need a Dog Way More Than a Boyfriend.” In any other context, this descriptor would be troubling, to say the least. But from dogs, those domesticated carnivores whose fetid excrement we lovingly pick up with our own hands, obsessive adoration is expected.

In Caesar’s Palace, the two-person show at LVL3 featuring work by Caroline Jacobson and Taylor Marie Prendergast, that deification goes both ways. Jacobson’s “Monument” sculptures turn our canine companions into stone bust idols worthy of worship, adorning them with towering wigs that rival those worn by 18th-century French royalty. In addition to the squishy-faced, tall-haired “Monument” dogs, Jacobson and Prendergast’s pieces depict bunny rabbits, pigs, gargoyles, and hybridized creatures that defy any categorization beyond “uncanny.”

The uncanny is a unifying feature in Jacobson and Prendergast’s work, which encompasses found object figures outfitted in wigs (Jacobson), painted bridal portraits with melting skin and sharpened teeth (Prendergast), silicone faces with pig snouts and coyote teeth (Jacobson), and floral still lifes wearing pigments not found in nature (Prendergast). The vibe is Edvard Munch meets Tinkerbell Hilton meets a Charli XCX video. A perverted Marie Antoinette for the modern age, My Little Pony with a side of decay.

In a 2019 interview in Paper, Prendergast cites the work of 17th-century female painters and dogs of mythology—such as Cerberus, the hound of Hades—as influences. Like the paintings of Artemisia Gentileschi—one of the few canonized female artists of the 17th-century— Predergast’s images are imbued with a certain violence. The four paintings in “The little white chapel” series depict demonic bride and groom, with serpentine eyes and gaping, clown-like smiles. Harsh charcoal strokes and jagged lines communicate a maniacal urgency; you can practically hear the characters cackling. In contrast to the black-and-white charcoal figures are their neon pink backdrop. Pink, not quite red, is a political color. Carnations, cotton candy, bubblegum, tongues, ham, ground meat—how quickly the list turns to gore. The lurid pink in “The little white chapel” is at once a seduction and warning sign, a violent affront to the eyes that relishes in the gaze yet warns its viewers, “Don’t get too close, she bites.”

Mesmerizing in a different way are Prendergast’s florals. The show features four, all untitled. Perhaps if I were a more avid gardener I could name the flowers that are depicted. Even though I can’t, their haunting effect is not lost on me. The tradition of painting flowers in vases dates back centuries, emerging as a recognizable genre during the Golden Age of Netherlandish art. Popularly associated with the ephemerality of life and its pleasures, still life paintings have always tended toward the melancholic. Prendergast renders her flowers in vases in the same heavy-handed charcoal strokes as her portraits, with frantic lines and smudges that convey a frenetic yet subdued movement. Her flowers, I feel, are screaming. The type of internal scream that vibrates behind the eyelids without letting even the smallest sound leave the body. These still lifes quiver with frustration accumulated over centuries of oppression. Humans, after all, have always taken nature for granted. Prendergast’s flowers are elegant in their rage, barely acknowledging their viewer, save for delicate eruptions of neon yellow, pink, and blue. The flowers get the last word, without having to say a thing.

Together, Prendergast and Jacobson’s pieces perform a dystopic duet of angelic electropop cut by the static of a poor Zoom connection. Prendergast’s deceptively straightforward charcoal renderings line the perimeter of the gallery, constructing a physical framework in which Jacobson’s creatures make their home. Staring at pink silicone faces with horns and sometimes more than one pig snout throws the viewer into the same dissociative fugue of staring into one’s front-facing camera for too long. How many selfies are too many selfies? The longer you stare at a face the less sense it makes. Selfie until you don’t exist.

Also in attendance are a series of found-object sculptures that are small in stature and could perhaps, in another life, be called cute. “Angel” is a creature somewhere between wild bore and porcelain doll, with demonic eyes, pigtails, and a lace dress. “Angel” sits upon a goth marble pedestal in the shape of a classical column. If every child’s dream is for their dolls to come alive at night, “Angel” is a nightmare. Notably more cheery are the buxom blonde “gargoyles.” Decked out in crystal earrings and a jeweled G-string, the blonde “gargoyles” harken back to simpler times, when cell phones weren’t smart and the Claire’s $9.99 and under rack was the answer to our most profound desires.

“THE YOUNG-GIRL DOESN’T KISS YOU, SHE DROOLS OVER YOU THROUGH HER TEETH,” writes French collective Tiqqun in “Preliminary Materials for a Theory of the Young-Girl. “MATERIALISM OF SECRETIONS.” Like the aforementioned drooling pets on pedestals, the consumerist identities we inhabit are gooey with lust—for violence, for possession, for beauty, for accumulation, for immortality. Rather than trying to position themselves on the side of “good” or “evil,” Prendergast and Jacobson’s pieces appropriate the vocabulary of excess and amplify it to an extreme that exposes the grandiose monstrosity that is Western tradition. Is the exhibition title, Caesar’s Palace, an allusion to the Roman general and his bacchanalian empire or to the present-day Las Vegas hotel and casino of the same name? Does it even matter?

Featured Image: Installation view, 2020. A side-angle shot of a gallery with white walls, ceiling, and floor, and a row of three windows overlooking the street. The installation view contains three sculptures and one painted canvas. Photo courtesy of LVL3.

Emma Dwyer is a writer living in Chicago.