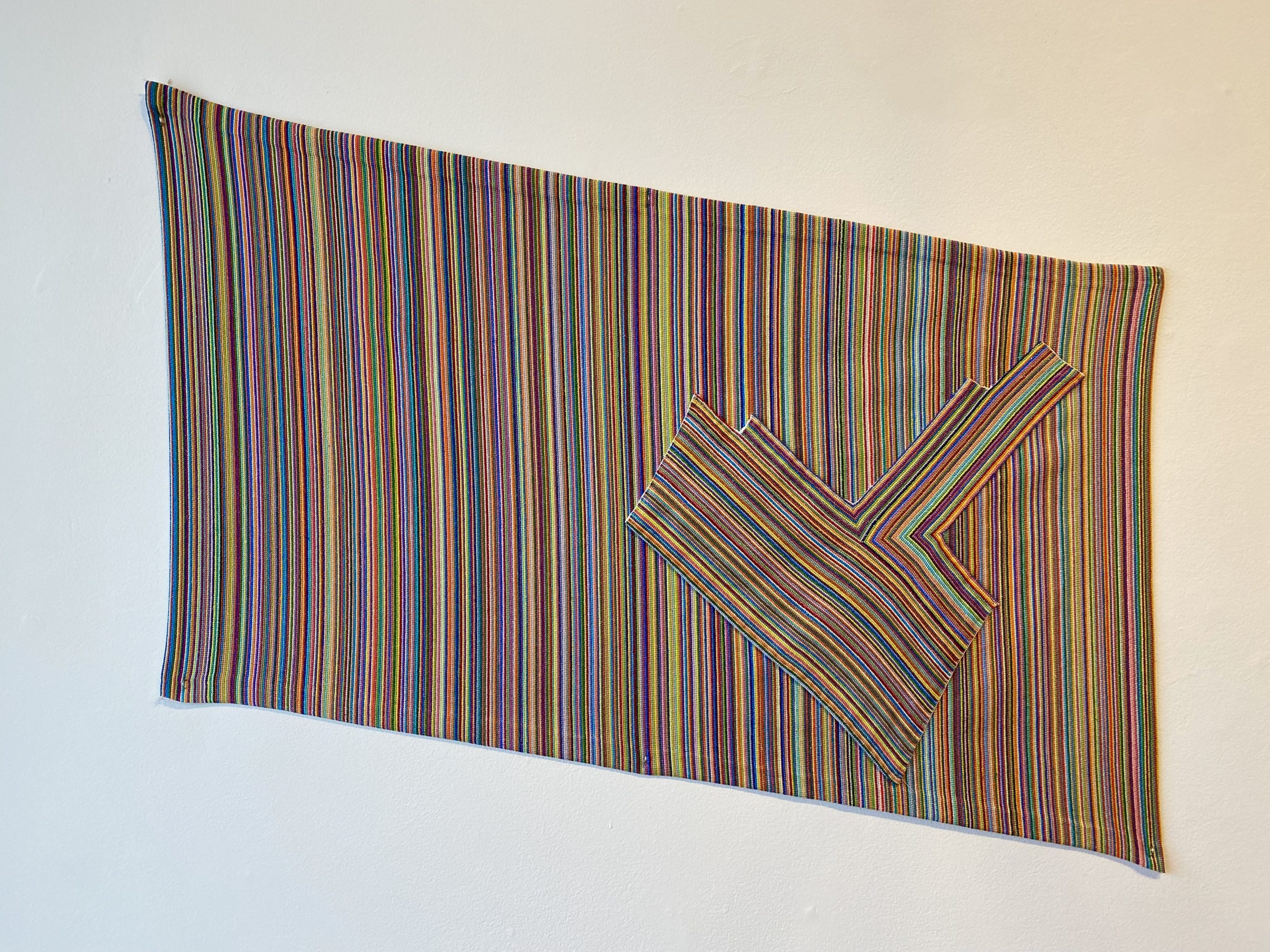 Featured Image: Stacia Yeapanis, I’m in Love with My Boring Life, 2022, fiber. Multicolor rectangular cross-stitched tapestry, hung horizontally sloped. There is a fiber motif with the same colors layered on top of the right side of tapestry.

This year, the brightly lit Flex Space at Riverside Arts Center hosted a selection of vibrant sculptures and installations that share more than a thematic braid in The Bigger the Fear and Despair…, showcasing the work of Mayumi Lake and Stacia Yeapanis.

Repeating forms in the exhibit include whorls, layers, and links, whether manipulated by the artist into particular shapes or as a natural behavior of the materials in use. It is hard to overstate how colorful the room is with the artists’ objects — it feels fitting to be welcomed into this space in the middle of another frigid Chicago winter, and embraced by so much brightness after what feels like an extended — still extending — spell of ugly gray. Lake and Yeapanis have adopted this compact area for a show that is finally seeing some action after the pandemic shut the idea down two years ago. Now, visitors can tune in to see how reflection during isolation produced a rich well for these artists, both of whom found their thoughts manifesting into acts of repetition and layering came time to create.

Two hanging sculptures greet the viewer. Reminiscent of festive paper lamps, almost as if ready to part for the audience to pass through, Unison (Pink & Green Kaleidoscope), spin gently in the air, revealing each quadrant of color and shifting the decorative flowers hanging alongside the streamers as they turn. Mayumi Lake draws frequently from the tale of the housouge, a heavenly flower used in many of the decorative works in Japan from the 7th to 11th centuries, fabled to bloom in the afterlife. Lake’s work in the show unveils rich colors and glossy surfaces, layered swatches in organic patterns that outline the shape of a wingspanor resting train of a peacock tail pinned to the white wall. Her contributions to the show are cohesive and playful. The partnership between objects is emphasized in the titles, Unison (Droplets) and Unison (Resonance).

The back corner of the room belongs to Stacia Yeapanis, where tin cans and linked tabs have been repurposed as modules for The Bounty and Burden of Caretaking, an imposing installation suspended by Shepard hooks and chain. The bulk of this work consists of connected tin can tabs, some from instantly recognizable neon-green energy drinks or dark-blue beer cans. Circular scales overlay the upper portion where the lids from cat food cans have found a new motive. Each lid has been flattened, punctured, and embroidered around the circumference, hiding the sharp edges with purples, pinks, and greens. Below the hanging element, Yeapanis has installed a layer of the tin lids to suggest a gradient scale across the floor. Piled on these lids are the squat empty cans themselves, also embroidered around the edge and partially filled with curled paper, as if each can held its own bouquet of unfurling roses. Tedium emanates from the corner and builds a quiet charge that encloses the viewer in the details. Each glinting tin surface reflects back a shard of channeled anxiety, and the individual pieces thrive in becoming part of a collection that blurs the line between familiar and distinct. Yeapanis has managed to imbue each module with a piece of her process from consumption to display, and the presence of the installation makes this known. The most satisfying experience with Yeapanis’s work, both in encountering the large installation and the smaller cross-stitched piece I’m in Love with My Own Boring Life, is when one is close enough to the work to block out a small section and study the fine details.

Given the format of the show, I decided to speak to the artists in tandem.

The three of us met one afternoon on Zoom and conversed at length about how Yeapanis and Lake arrived at this moment in their work and in the gallery together.

Annie Raab: I noticed key words in the show and across your artists statements and titles that I did not expect: fear, despair, trauma, anxiety, phobias, suffering, burden, etc. But the work is so colorful and the gallery is so brightly lit and lovely. What happened?

Stacia Yeapanis: Before we decided on a title for the show, I had been thinking about navigating anxiety and thinking about the experience of human suffering and coping. It’s not the same for everyone, but many of us share the same mechanisms. I don’t want my work to point directly at suffering, but I want to directly deal with the emotional experience.

Mayumi Lake: We saw the similarities between our materials, colors, and shapes. When I saw more of Stacia’s work, I felt the same sense of fear. I make my work because I feel motivated by fear, which moves my hand. And that’s what I saw we shared.

AR: So you have known each other for a while now?

ML: We’ve known each other since Stacia was a graduate student.

SY: Yeah, I did some photography back then while Mayumi was on staff at SAIC, but we reconnected through our work. It was one of the benefits of the Bolt Project Space at the Chicago Artists Coalition—a few years ago that we both had work in that—and we saw similarities between our work at that time.

AR: So your history goes back that far. Why are you coming together now?

ML: We must have done a studio visit and decided on the show at Riverside. And then COVID happened. So this show has been postponed a year and a half. The work I made for the Chicago Artists Coalition show was a politically charged piece about violence against Asians. I have never made that kind of work before, but the nature of the moment inspired something new.

SY: It was interesting because my older work was very site-specific and temporary, made of repeated images from magazines, which was a similar process but different from Mayumi, who was taking photographs she later cut up and rearranged. We were both working from ideas of beauty and seduction from different sources, but building images in the same way. I was using advertisements and Mayumi was using historical symbols.

AR: Can you talk a little bit about how you document phobias?

ML: For me, phobias usually come from imaginary fears and nightmares that I had as a child. Phobia and fantasy and desire were very much related back then, But what I have experienced recently is the loss of my home and roots, and the phobias were made a reality. There were major earthquakes in Japan in 1995 and 2011. 2011 in particular was a nightmare come true during the Tōhoku earthquake and tsunami. I thought my entire homeland was destroyed and uprooted. After finally confirming my family was safe, all I could do was watch the towns being wiped away by the disaster on television. That feeling is reflected in my 2014 series Latent Heat.

SY: My process is a little different. I start with the accumulated mark or material, and then I let go. Whatever the accumulation does, I cannot always predict or control. I don’t know that I set out to make a document, and yet I end up with this sculptural byproduct in the end. I have a regular practice of taking photographs of masks on the ground and all the jigsaw puzzles I complete. But I think about my photographs more as a collecting habit rather than a documenting habit. I don’t see taking those pictures as different from accumulating the metal can tabs or using cross-stitch as a way to collect moments that are quickly passing out of existence. It is another way to pay attention, and to point to the human urge to hold onto something fleeting.

AR: Mayumi, how does clothing and costuming play into your influences?

ML: In my previous photographic works, I often used clothes for the subject’s characterization. The kimono was one of them. I am also a fan of vintage clothing. I love old, vintage stuff! Kimonos are some of the items I love most. I became more interested in kimono patterns as I collected them, and my research led me to concept of housouge [the Japanese heavenly flower] which has been the inspiration for the Unison series of works.

AR: Stacia, your artist statement makes you sound very practical, resourceful, and obsessive. How did you find your way to making such unwieldy, shifting forms?

SY: It’s true that I am practical and resourceful. “Obsessive” is a word that comes up in relationship to my work a lot, but the word “compulsive” seems more accurate. It may seem that I get obsessed with certain materials, but the materials are simply tools to give external form to an internal experience. The action is about using whatever is readily available to me—from the TV shows I watch to the products I consume—to digest emotional and psychological experience. The repetitive processes—punching holes, piercing, rolling, twisting—need a place to land, and the mundane detritus of everyday life is the most accessible vehicle. My sculptures and installations are an expression of my internal landscape, which is constantly: shifting, moving, and changing; the forms must reflect that impermanence. There is an effort not to control the internal landscape, but rather to be with it, to allow it and, through that acceptance, to invite transformation.

ML: The collecting is almost like freezing a moment in the material…

SY: Yeah, I’m not denying the idea of freezing a moment — but it’s not always my thinking, but you’re right.

ML: For me, it’s about the moment. I don’t think about freezing time as much as defrosting a frozen time. I’m drawing from 1200 years ago, people’s habits and fears, and digesting it in a contemporary way. I’m interested in everything old and historical. I grew up in between Kyoto and Osaka, so everything was historical in one, and modern in the other. I felt the pull between the two. I initiated this project from the ideas of the historical, bringing back a historical symbol using digital photo techniques, so I feel in between times. The irony of the housouge is to show ancient fear, and yet here we are in 2022 and we still feel that ancient fear in a different timeline.

SY: We share that similarity. My origin of collecting the tangible byproducts of daily life actually began in the virtual realm with the collection of TV clips based on sound and dialog. I’m heavily influenced by vidding, a practice of remixing beloved TV shows clips to create new narratives. The practice predates YouTube by about 30 years, and fan vids both celebrate and critique mainstream media texts. They are a subversive strategy for active engagement with the stories that come to us through popular culture. We don’t have control over the stories we receive from the dominant culture, but we have control over our responses to them. I apply that logic to both the textual and the physical materials in my immediate orbit.

Following my conversation with the artists, I felt a heavy, but not pessimistic, sense of unity over similar fears. While our collective fears over the last two years have been overwhelmingly of anxiety and doubt, there is an enduring pattern of comfort present in the reminder that it is shared. The Bigger the Fear and Despair… may showcase byproducts of anxious times and pestering thoughts of darkness, but what has emerged is an uplifting presentation of resilience from two artists at the brink turning fear and despair into a reflection on irrepressible buoyancy.

Annie Raab earned her BFA in Sculpture and Creative Writing from the Kansas City Art Institute and her MFA in Fiction at Virginia Tech. She has published art criticism and literary works in The Pitch, Sculpture, Southampton Review, and many other fine periodicals.