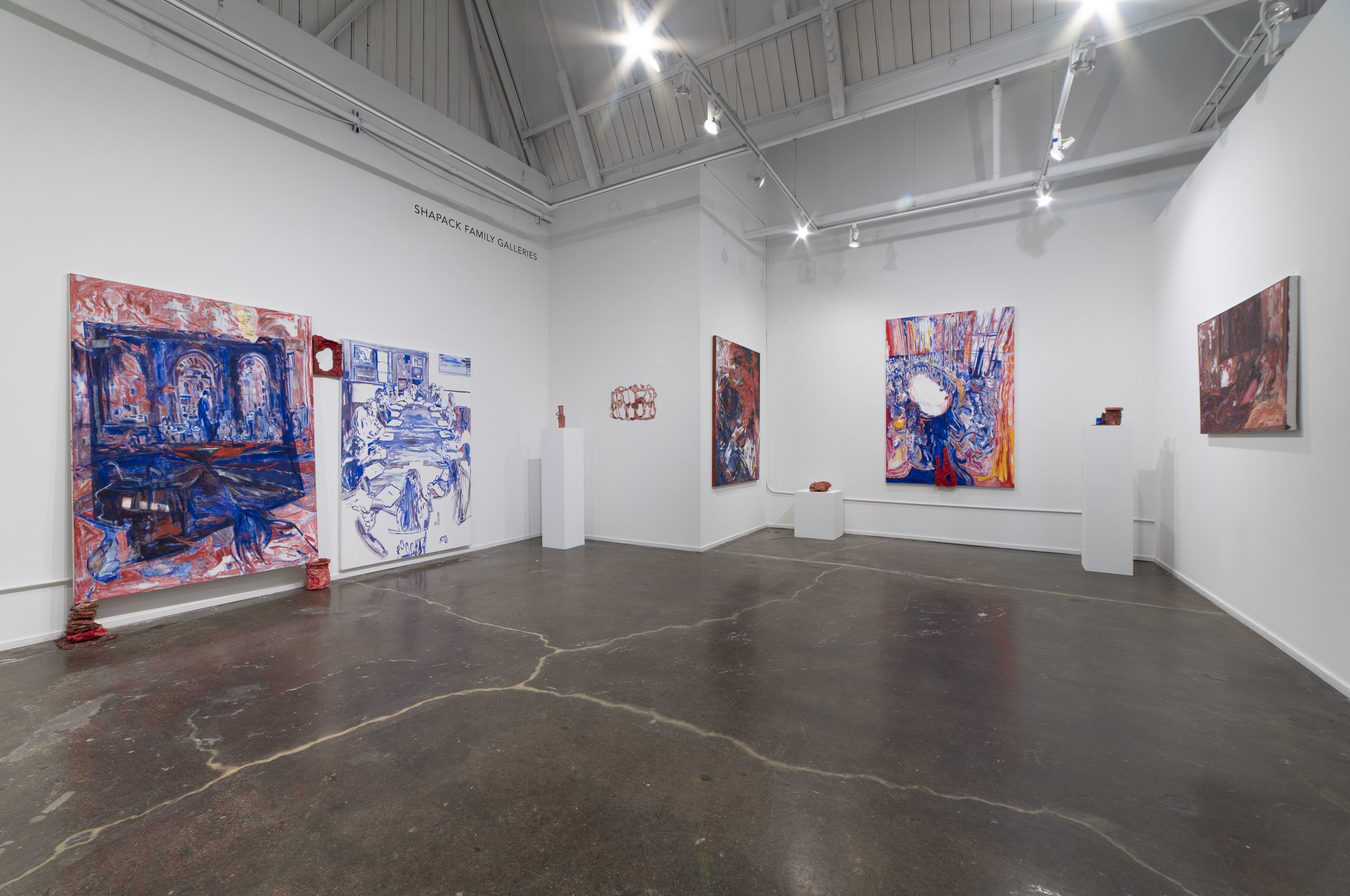 I dig deep into the caverns of my memory in order to recall the first time I used a drawing compass. My elementary school classroom appears, and I remember being enamoured by the simplicity of the concept: one compass leg serves as the anchor, the other as the mark maker. When these equally important legs come together, precise circles result. Not long after the experience, I took a trip to the beach. Still fascinated with the physics of this object, I used my body as the anchor, a stick as the mark maker, and twisted around, leaving perfect circles in the sand. All of these memories flood back to me with clarity upon visiting Longing Compass, featuring the work of BOLT artist-in-residence Karen Dana Cohen at the Chicago Artists Coalition.

In the accompanying exhibition text of Longing Compass, Cohen compares herself to the mark maker of the familiar object of a compass due to her having to relocate her studio to the basement of her home. It is important to discuss the complex circumstances that have led to this body of work: the world was suffering a global pandemic, each day offering changing rules and restrictions, and most pertinent to this show is that most people had to survive over a year of their lives within the constraints and protection of their home. However, even without this context, the intense sense of longing for community and shared space with other humans can be felt by Cohen’s work alone.

Dominating the room are eight large-scale oil paintings, embedded with various mixed media sculptures carefully placed throughout. The color palette is restricted to lovely twists of cool reds, blurring purples, cobalt blues, and surprising subtle moments of radiating oranges and yellows. This restrictive color palette is reminiscent of the restrictions set upon the artist while making this work during 2020. If you are familiar with Cohen’s practice, then you know she explores a wide variety of colors, so this choice feels very intentional. Already confined to the constraints of her basement, using restraint in color evokes the sense of doing as much as one can with very little at hand, which is essentially what we all had to do during the pandemic. On top of this, Cohen explains the chosen colors as being drawn from the surrounding political climate: “Last year during elections, we were bombarded with a flat landscape of red and blue everywhere, we were experiencing a lot of tension and anxiety.” The stark contrast between the harsh blues and blazing reds that fill the gallery come together to create a distressing environment, similar to the climate this body of work was born from.

The most striking element that ripples throughout the exhibition is Cohen’s use of perspective; each scene depicted is painted from a perspective that allows the viewer to fall into the piece. The angle is slightly higher than if the viewer were actually present in the scene, creating a sense of voyeurism. Directly across from the entrance is a large-scale painting titled The Meeting, portraying a group of twenty or so individuals sitting around a long table. Cohen relies heavily on the cobalt blues and touches of cool reds to map out the scene. The scene itself, however, is rather mundane in nature: in front of each figure is a sheet of paper and the figures themselves wear various expressions of boredom. Although, calling this scene mundane is a pre-pandemic privilege. For myself, there were days I would have given anything to be surrounded by others in a boring business meeting, listening to people talk with their three-dimensional mouths rather than through a screen. I imagine Cohen creating this scene within the walls of her basement while feeling an overwhelming and returning sense of longing.

Her piece, The Congregation, demonstrates an exemplary marriage of the previously mentioned use of color and perspective. Depicted is another group of figures gathered, this time surrounded by glaring hues of melting stain-glass windows. The scenery radiates from a pale oval, just offset from the center. Beginning with gradients of blue at this near center, and reaching lucious drippings of orange at the perimeter, the viewer is just outside of the action. The painting begs the viewer to step in and join the group, and the familiar longing to be close to one another emerges yet again.

Though the viewer can feel a sense of yearning from each piece, the painting that evokes this sensation the most is The Playdate. A group of abstracted figures gather around a parachute shaped object. The scene is framed in a collapsing rectangle, with a contrasting background painted around it. What emerges is the feeling of a painting within a painting, punctuated by a figure in the foreground, on the outside of the scene looking in. The viewer can see the backside of this excluded figure’s head while they watch the playdate scene unfold. Though the craving to be surrounded by people in a community is prevalent in each piece, it becomes overwhelming in The Playdate. Cohen relies on a combination of sourced photographs, memory, and creativity in order to make these paintings. Looking through photos of the past, remembering what life was like, and dreaming of what it will be like once the storm passes is all too relatable.

After sitting with the work for a while, an important motif emerges: each scene offers a large group of people being drawn to a radial point. This is true for each of the previously mentioned paintings, as well as in The Roundtable, where figures sit across from one another circling a roundtable, as the title suggests. Similarly, in The Class, figures sit on the ground in an orbiting formation. The Reunion also depicts a group of figures gathering from a central point. In the exhibition text, Cohen’s final paragraph reads, “The positioning of myself in the basement is as the needle piercing the ground, driving itself like an anchor to a lower point to swing from…extending to find the absolute furthest ripple.” Each of these paintings that show figures being drawn into a circle reinforces Cohen’s visualization of the body as a compass. The deeper she digs into her basement, the further “ripple” she can extend herself into. These “ripples” become the figures in group settings, sharing mundane moments that life before the pandemic offered. The only painting that does not include this motif is To Remain Standing, which includes figures being pulled to one side instead of sucked into a central orbit. Cohen explains that this painting was completed prior to lockdown, which reinforces how integral the context for which Cohen worked in was to the resulting pieces.

With one leg stuck to the gallery floor, the other begging to extend into each painting, I assume my role as the compass. The concept of a body serving as a compass in the way Cohen articulates is profound. Longingness is difficult to explain, but perfectly visualized through the compass: one part of you stuck, the other part of you extending towards what you’re longing for, resulting in endless circles.

Featured image: An installation view of Longing Compass at Chicago Artists Coalition, featuring the work of Karen Dana Cohen. The view of the gallery shows five paintings against white walls and four sculptural pieces with various additional three-dimensional pieces accompanying some of the canvases. The paintings all portray groups of people with large, gestural strokes of blue and red paint. Image courtesy of the artist.