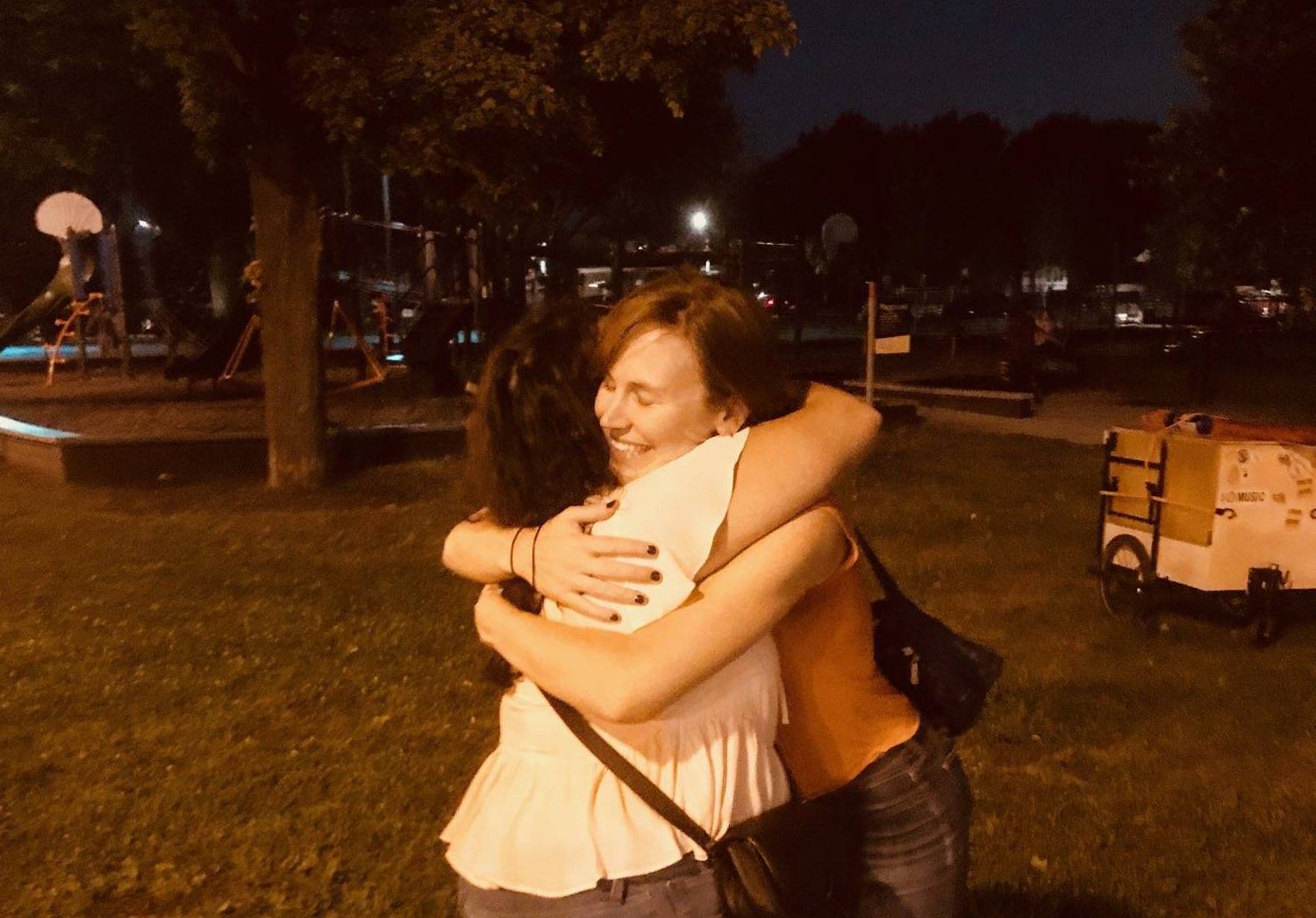 Last month I learned that I hoard love notes.

Shortly after the shelter-in-place mandate I had a particularly tough day, which concluded with a bout of uncharacteristically convulsive crying and me deciding I could do nothing else that evening but clean. As I organized papers on my desk, I unearthed a handwritten letter my friend Udita gave me at her wedding earlier this year. Its contents were precise but not precious, making me feel known not only for my “positive” qualities but also my flawed and idiosyncratic humanness. Though technically a thank-you card, I don’t know what else to call it but a love note. How lucky for it to turn up right then! I texted Udita to say her note was just what I needed that night. She responded that my message was just what she needed, too.

These days “love notes” have been appearing to me in diverse forms, by various paths. Another week, I texted my friend Myrna to check in, writing the words sending an e-hug. When she sent back an adorable cartoon figure with its arms outstretched in a “virtual hug,” I scanned my phone’s downloads for a cute image in return, like one from my spouse of our guinea pigs. But waiting for me in that folder was something more resonant, long forgotten — a warm-washed photo of Myrna and me hugging IRL. It’s a real hug, too. We are leaning into each other, fully in embrace, and my eyes are squeezed shut, as if they must follow my arms’ lead. Myrna’s husband captured the moment last summer — perfectly, circularly, at a time when they had come out to support me. I attached the photographic hug with a caption: It’s like Alfredo knew we would need that someday….

Following these incidents and others, I wondered how I came to be amidst this abundance of affection, especially since I have not always felt myself in such a position.

Though I declared my atheism at age eight, I periodically recall the tale of Joseph (of the coat of many colors), children’s picture-bible version. As I remember it, the enslaved Joseph interprets the pharaoh’s dream, advising that seven years of famine will follow seven years of plenty, but if they start amassing grain now the kingdom will survive — thus Joseph saves Egypt and is promoted far out of his chains. (One would be right to question who labored in the creation of that surplus and for whom, and such inquiry’s insistent relevance in the present.) The story’s aspect of planning for scarcity has also persisted in memory for me, influencing my life in unforeseen ways, including my general frugality and, as I’ve realized recently, my own stockpiling: books, grain sometimes, and, apparently, love notes.

It strikes me that when we work to foster and maintain community regardless of the weather, we have it when we need each other the most. While I have also met lovely humans online these past few weeks, I am chiefly re/engaging relationships built before this physical isolation period began, finding nourishment in longer-term bonds. (Other ties are being tested; not everyone I thought would support or advocate for me has, and perhaps others feel that way about me.) I’m also drawing on a tool borne of my mental health management. For years, afflicted with anxiety stemming in part from doubts about self-worth, I’ve had a “label” through which I archive emails that contain distinct affirmations — external validations and insights — from individuals I admire and trust. Uncountable instances, anxiety peaking, I’ve revisited this trove of treasured fragments. In complement, I’ve long practiced making time to offer such appreciations, not least because I never know for whom kind words can serve as lifelines — the same way, I imagine, people don’t know what their thoughtfulness has meant to me. I also think there is great power in articulating another person’s particularities, and in expressing gratitude for their unique complexities from one’s own point of view. When genuine and specific, such acknowledgments — much like gratitude or love — both cycle and emanate outward, enhancing shared humanity as they bear witness to it. The mere fact of paying attention is fundamental to love notes’ gift, the time taken to focus on or come to know another person. Fresh notes deepen, not displace, previous gestures from the same sender, as well as recognize that we are dynamic beings who change, as passing hours and shifting worlds show new shadows. Whether encountering or composing them, such notes give me renewed momentum, reminding me to continue to love.

I generally hesitate to give advice, especially to broad audiences, so I won’t. But I will share that hoarding love notes — however intentionally or serendipitously it’s occurred — along with offering them to others, has been helping me through my particular challenges in this extended moment. As do many, I find stockpiling in a time of heightened crisis contentious, often unethical, due largely to concerns about equity. Yet, I would hope that most people already possess and can access their own versions of love notes — whether via a desk, downloads folder, or email tag, or embedded in memory. Love notes are perhaps the least shameful, least unjust, items one might hoard. Even when discrete entities, they are not necessarily limited in quantity — like love itself, they are a potentially inexhaustible resource, a generative gift. Even in this further straining season, I believe there can be more than enough to go around.

Featured image: The photo described in the essay. The author and her friend Myrna, both visible from hips upward, embrace each other in Davis Square Park in August 2019. Marya is smiling and her eyes are closed; Myrna’s face is not visible. It is nighttime but the foreground is bright. In the background are a playground, a walkway, trees, and what appears to be a paleta cart (William Estrada’s Mobile Street Art Cart). Photo by Alfredo Romo; cropped version of original used with permission.

Marya Spont-Lemus (she/her/hers/Ms.) is a fiction writer, interdisciplinary artist, and educator focused on teen creative, leadership, and professional development. She lives and works on the Southwest Side of Chicago. Find her on Twitter and Tumblr. Photo by Lucas Anti.