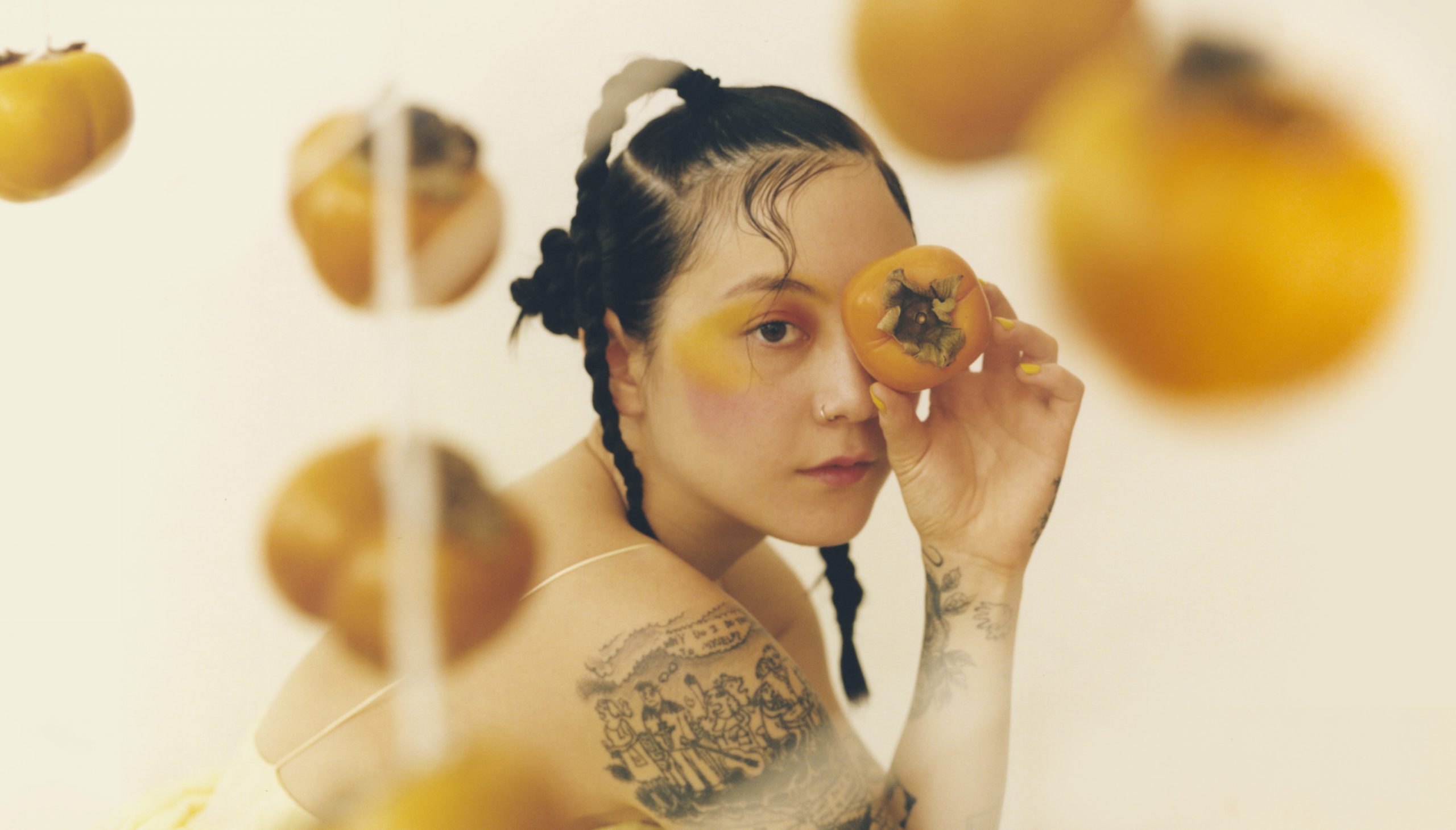 Featured image: A portrait of Michelle Zauner by Peter Ash Lee. Zauner is facing the camera holding a persimmon. She has her hair in a braid and wears yellow and orange make up. Persimmons hang by strings around her.

Anyone familiar with the contemporary indie-rock scene would agree that Hopper’s diagnosis has only grown more accurate over the past few years. In a 2018 album review, the New York Times’ Jon Pareles noted that “Soccer Mommy joins a wavelet of young women—along with Julien Baker, Phoebe Bridgers, Mitski and many others—who [write] songs that probe vulnerability and trauma, self-sabotage and self-preservation.” That same year, the New Yorker’s Jia Tolentino declared something similar: “I’m thinking of Mitski, Waxahatchee, Jay Som: women who […] explore everyday longing and disappointment in their lyrics, and cradle their songs in wryness and sincerity and guitars.” Digging through album reviews of female indie rock artists reveals a persistent fascination with “plainspoken meditations” and “orchestral confessionals”—the “sharp eye and gently bruised psyche,” the “sweet and appealingly messy.” The constant self-representation and performance proper to the social media age have amplified listeners’ hunger for confession—perhaps especially so from female-identifying artists. The trope has become so pervasive that “sad indie girl” is now a well-known archetype, susceptible to internet memes and parodies galore.

But Jubilee, the third album to come from the indie rock band Japanese Breakfast, offers an especially potent challenge to listeners who expect plaintive confession. The band is headed by Michelle Zauner, a 32-year-old Korean-American musician, author, and director. Though Zauner gained critical acclaim for her albums Psychopomp (2016) and Soft Sounds From Another Planet (2017), both of which deal with her grief after losing her mother to pancreatic cancer in 2014, Zauner wanted her third album to exist in a distinct sonic and tonal world. “After spending the last five years writing about grief,” Zauner told Pitchfork, “I wanted our follow up to be about joy. For me, a third record should feel bombastic and so I wanted to pull out all the stops for this one.”

She did indeed. Jubilee is an explosion of possibility—a symphony of complexly layered instrumentals, light-as-a-feather vocals, and beguiling lyrics from start to finish. Zauner probes joy from a multitude of perspectives, proving herself a generous and imaginative excavator of emotion. The album speaks to her far-reaching musical ambition, which extends well beyond the gendered and racialized experiences to which listeners might otherwise confine her.

Much of the album’s expansiveness stems from Zauner’s liberal use of personas. Zauner’s self-declared favorite song on Jubilee, “Kokomo, IN,” is not autobiographical; instead, Zauner assumes the voice of, in her words, “a young boy in a small town saying goodbye to his girlfriend who goes off to a study abroad program.” Pluckier than a ballad but more leisurely than the album’s two frenetic opening tracks, the song is an ode to the strange vertigo of being left behind while a loved one moves on:

I’ll wait, passing time just popping wheelies
And kicking round this flyover state
Watching you show off to the world the parts I fell so hard for

Though Zauner is signed to Dead Oceans, an indie label based in Bloomington, IN, she’s never lived in a “flyover state”; her parents moved from Seoul to Eugene, Oregon when Zauner was one year old, and she’s since moved between Philadelphia and New York City. Nevertheless, there’s something uniquely Midwestern about the loneliness that Zauner describes. Her sharp voice croons and eddies around unexpected lyrics—first comparing loneliness to “the fear of an oven left on” and then recalling, “I was soft as a dune.”

The album’s most notable persona is not tender, but villainous; in “Savage Good Boy,” Zauner sings from the perspective of an ultra-wealthy businessman, locating the song in a late-Capitalist wasteland wherein climate catastrophe has driven the human race underground and further apart. The song opens with a trio of falsetto voices (the result of a collaboration with Alex G) before Zauner’s voice slices through, christened by the percussive strike of a stomach-droppingly low piano key: “I want to be your man,” she sings; “I want to be your savage good boy / I want to take care of you.” The moniker “Savage Good Boy” is puzzling—contrasting the moral flavor of the label “good” with the wild (and, in today’s world, surprisingly positive) connotations of “savage.” Readers of Zauner’s 2021 memoir, Crying in H Mart, may recognize it as the opposite of her childhood nickname: “By the time I was three,” she recounts, “Nami Emo [Zauner’s aunt] had dubbed me ‘Famous Bad Girl.’”

If the name is puzzling, the message of the song is clear: Zauner’s multimillionaire acts as both a stringent critique of and warning against greed. Some of the most chilling lines are those in which his self-delusion rings clear—as when he rationalizes what he’s done to prioritize his own joy over that of others:

I want to make the money ’til there’s no more to be made
And we will be so wealthy, I’m absolved from questioning
That all my bad behavior was just a necessary strain
They’re the stakes in the race to win

The song’s greatest success is the passion in Zauner’s voice, which leaves open the doorway for, if not empathy with her villain, then at least some understanding of the universal human desires undergirding his inexcusable behavior. “I think that every type of villainy is rooted in normal human behavior that we all exhibit,” Zauner told Stereogum. The song is a crucible for experimentation—testing the fragile line between forgivable selfishness and villainy, probing at how both can spring forth from an American culture that values individual success above all else.

Jubilee is also upfront about the sacrifices we make for happiness—particularly in monogamous relationships. “Posing in Bondage” turns a sharp eye on the exchanges that relationships demand: freedom for security, effort for connection. When the chorus arrives, it finds Zauner’s voice muffled and deepened, singing a haunting single-word chorus over a computerized beat: “closeness / proximity / I need it / bondage.”

Zauner is quick to note the difficulties of wrangling one’s own brain into a happy state—a sentiment that resonates especially powerfully at the end of the pandemic. On the pop-y “Slide Tackle,” Zauner pairs a plucky guitar line with a frank discussion of mental turmoil: “Don’t mind me while I’m tackling this void / Slide tackling my mind / This weight feels like I’m wrestling with my head / Obsessing in the dark.”

The album finds joy even in the act of musical creation itself. In “Paprika,” the album’s opener, Zauner turns an appreciative eye on her career as a musician: “How’s it feel to stand at the height of your powers / To captivate every heart? / Projеcting your visions to strangers who feel it, who listen, who linger on еvery word.” The song is a prime example of Zauner’s heterogeneous reference points; inspired by the song “Parade March” from the Satoshi Kon movie “Paprika,” it features buoyant trumpets and a marching, rolling drumbeat that upholds its sky-high energy levels.

At its core, Jubilee seeks connection. Zauner frequently describes a fear of “being left”; in Kokomo, IN, she asks, “These days I can’t shake the awful feeling / I’m missing something I can’t place / is that you?” “Be Sweet,” the album’s lead single twists the fear into a moment of masochistic pleasure, musing, “Fantasize you’ve left me behind and I’m turned back running for you.” In “Posing for Cars,” the album’s final—and perhaps best—song, Zauner muses, “Woke from a dream in which you’d left me / Posing for cars on the American stoop”:

And how could you ever conceive
How much I need you, how truly barren I can be?
They say that time, it is the only certainty
But it’s been one o’clock for hours
Oh, the day is long untangling

After a short few lines of lyrics, Zauner launches into a minutes-long guitar solo, a choice inspired by the Wilco song “At Least That’s What You Said.” Zauner told Stereogum, “it felt really important that I do it [myself] and even though Meg Duffy [of Hand Habits] or a lot of people are much better guitar players than I am, [that I] still have a voice.” Clocking in at six minutes and thirty-eight seconds, it’s by far the longest song on an otherwise-speedy album, offering time to relish the pure emotion and elegant composition of Zauner’s instrumentals.

The last word that Zauner sings on the album is drawn-out, surprisingly sweet: “fermenting.” It’s an apt ending that marks out the potential for a new beginning—what Zauner describes in Crying in H Mart as a “new life”:

I had thought fermentation was controlled death. Left alone, a head of cabbage molds and decomposes. It becomes rotten, inedible. But when brined and stored, the course of its decay is altered […] it enjoys a new life altogether.

As we emerge from the lonely brine of our homes once more, Jubilee invites us to see the world as it is around us—studded with joy, teeming with life.

Margaret Schnabel takes up (physical) residence in Indianapolis, IN and (virtual) residence at Soupbone, a digital humanities collective. She received her BA in English and Cognitive Science from Indiana University and currently attends the University of Oxford as an MPhil candidate for World Literatures in English. Her research centers around the sticky dynamics of identity, confession, and political change in the internet age. You can find more of her writing at buttondown.email/margaretschnabel.