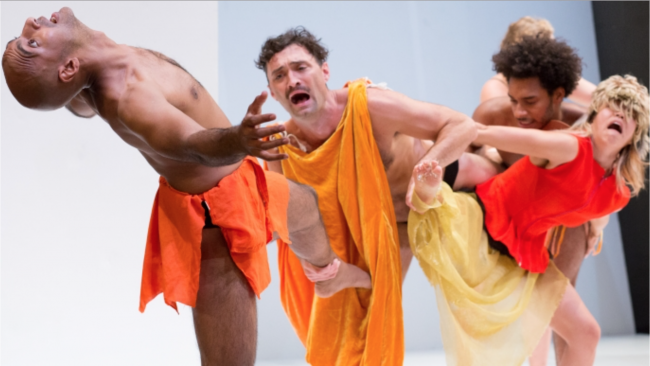 None of the typical rules of a play apply here. Then again, when you come to a performance at the Museum of Contemporary Art Chicago, you aren’t really expecting typical, are you? Play is the second performance in a series called Thank You For Coming, created by Bessie Award–winning director and choreographer, Faye Driscoll. This performance “uses the ritual of storytelling to explore our reliance on stories to relate to one another and form identities as individuals and citizens.” What begins as a communal audience-participation on stage quickly delves into a parody of an absurd theater act. Employing multiple meanings of the term “play,” the cast performs a drama but an allowance for improvisation leaves room for the actors to engage in the more fanciful version of “play” as well.

Play is also atypical in its breaking of the fourth wall. Not only does a sound engineer remain on stage, occasionally being called into the action, but Driscoll herself joins the cast. At times she is grabbing props or directing the actors, as if it were a rehearsal that we’ve all snuck into. In the midst of the action, Driscoll even leads a rock-and-roll number, worthy of any indie set list. The show concludes with a nod to its participatory beginning. When initially taking their seats, audience members were asked to complete a sentence—mad-libs-style—on a notecard, which was then collected. In near-complete darkness, Driscoll reads the dozens of notecards in succession before scattering them on to the stage floor. Some are melancholy, others comical, but mostly it’s kind of thrilling when you hear your own come to the top of the pile before she’s quickly on to the next. Driscoll holds a flashlight to her face, as if telling ghost stories around a campfire. The only other figure seen on stage is the large shadow cast by the American Sign Language (ASL) interpreter, signing vigorously as she speaks.

The interpreters and audio describer played their own critical roles because this was one of the MCA’s so-called relaxed performances, which “are for people, with or without disabilities, who prefer some flexibility in regards to noise and movement in the theater.” In addition to ASL and audio description, audience members are free to move about the theater without some of the conventions that more traditional theater settings might mandate.

Though I’m a sighted audience member, I picked up a compact device and listened to the audio description, a new experience for me. Victor Cole, an 18-year veteran describer (and actor himself), verbally described the action happening on stage so that guests who are blind or have low-vision could gain a more full experience of the performance. I later spoke with Cole to learn more about his process and what it was like to describe such a unique production.

Because dance and performance are already so interpretive, Cole said he tries not to get “caught up in terminology.” By saying “what [I] see in the most common terms,” he’s able to draw a connection with the audience, no matter their level of familiarity with the work. Regarding process, Cole saw the performance once before to stake out what he calls “landmarks” or major plot points that serve as timing notes, although he usually prefers to see a show twice before describing–once to take it in as a whole and the second time to make note of those landmarks. But it’s actually “describing the silence” that Cole says is critical. Cluing people in when someone is making their way on stage, or adjusting a microphone—it’s those nuanced motions that a sighted audience member, like myself, takes for granted. The actors Lindsay Head (left) and Laurel Snyder (right) gesticulating and with deep expression. Both are in black costumes and cowls, and Head wears a fake beard while Snyder wears a headdress. Photo by Francesca Beltran.

Given that Driscoll was acting more like a stage manager at times, Cole had to be aware of her movements in addition to the actors. “The periphery action, you have to keep your eye on, was particularly important for this piece, because there was lots of nonverbal action.” Things happening at the edges, including Driscoll, the sound engineer, and at times the audience, all dipped in and out the performance. The fourth wall wasn’t so much broken as it was made permeable.

ASL interpreter Shannon Moutinho also spoke with me about how the blur of audience and stage was an aspect of Play that made it “formulaically different” from other interpretation gigs. Moutinho was joined by fellow interpreter Sam Freeman. “Any theatrical production, that isn’t a one-person show, requires at least two interpreters,” according to Moutinho, a necessity that also poses the challenge of how the interpreters will split the dialogue. After seeing the performance once in preparation, Moutinho and Freeman discussed a strategy for their joint interpretation. In some acts they divided the dialogue by characters, in other sections the speech was moving so fast they had to divide it by gender (for the practical reason of voice-recognition), Moutinho interpreted the rock song, and Freeman the final notecard reading. “It’s a balancing act to split the work in a way that makes sense,” said Moutinho.

Another fine line to toe? The interpretation of a term like barbone from Italian. At times, the actors used “barbone” as a noun, a character’s name. At other times, it was used as a verb (meaning to travel, in the matter of a “vagabond” of sorts). So, how do you sign a word with multiple meanings? In this case, the interpreters decided to adjust for the context—when the characters used it as a name, they signed it as a name, when they used it as an action, they translated the equivalent of the action. Because every production is different, “the solution totally depends on the project.”

Moutinho and I also spoke about the idea of distraction and what that means in relation to interpretation because, unlike Cole’s audio description, you cannot choose whether or not to see the ASL interpretation. She said she never wants to “upstage anyone” but also want to be “clear and accessible.” Through careful considerations and pre-planning, the interpreters “blend with the art on stage.” In many ways that’s good, you want the experience to be cohesive—but as Moutinho also explains, blending in too much “doesn’t work to normalize accommodations.”

By offering relaxed performances and giving guests the opportunity to experience the work in different ways—whether that’s through ASL, audio description, or just a more flexible setting—the MCA is creating an environment that engages audiences in a multitude of interpretations.

Featured Image: A color photograph still of the performance “Play” in which four actors, partially clothed in various shades of orange loose garments, pull on on another. A male actor at front is leaning backwards, balancing on one leg, while the other three actors tussle with mouths agape. Photo by Whitney Brewer.