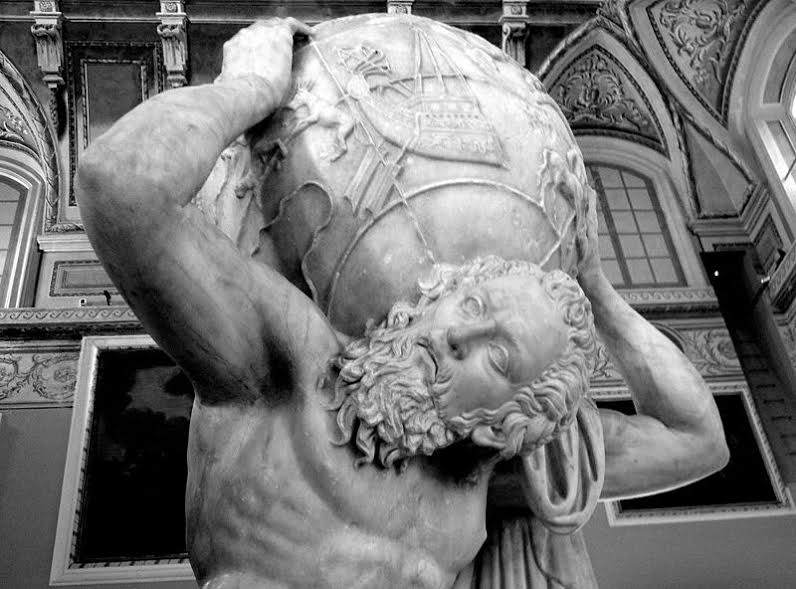 “They don’t expect you to be Indiana Jones or Superman. Imagine how that kind of pressure feels. So…as a Black man you may be beleaguered, but at least you’re not Atlas carrying the weight of the world on your shoulders.”
– Ishmael Reed, Ebony Magazine

I’d Rather Be Atlas

I’d rather be Atlas

Than to be burdened by the brutes.
The brutes who grew up
down there

Pampered with pot soil
and wrapped with ribbon-
pink for the girls and blue for the boys.

(shit was our pot soil and our ribbons
were rope)

Placed out by the windowsill
And so lovingly instructed to
“Grow. Damnit grow!”

With never too much hatred so their
little mouths were kept begging for more.
And so they grew up and into what
they were meant to.

(which pretty much stank for us)

But what they forget is,
Shit’s the best soil.
So now I’m all big and all strong and been waiting so long
that I do believe

(excuse me Atlas, if you would move aside for a moment)

I could carry the weight of the world on my shoulders

And could show you,
Will show you

So on the night the stars really gleam
(Got too close to the ‘fro and the Super Sheen)
You’ll gaze up to a sky truly black
When I do my mean, so smooth and so keen
One Hell of a balancing act.

Timothy David Rey is a Chicago-based writer, performer and educator.  He attended Indiana University Bloomington, on The Most Outstanding Author scholarship, from IU’s Department of English where he studied poetry under, Pulitzer Prize winner, Yusef Komunyakaa. He is a 2015 Semi-Finalist for the Guild Literary Complex’s Gwendolyn Brooks Open Mic Poetry Award, and one of the winners of Project Exploration (The Poetry Center of Chicago 2004). He is the co-founder of the LBGT Solo Performance Showcase, Solo Homo (2002-2011). Timothy’s plays and performances pieces have been seen and heard at venues throughout Chicago as well as out of state and in Panama. His book of poetry and performance, Little Victories, was published in 2012 by NewTown Writers Press. Among his performance experiences, Timothy has performed locally, in New York City (International Fringe Festival) as well as The Kennedy Center For The Performing Arts. Timothy currently teaches poetry and performance for Columbia College’s CCAP Program and is a Poet In-Residence for The Poetry Center of Chicago. He is also the Chicagoland Regional Coordinator for Poetry Out Loud!  (Poetry Foundation/ National Endowment For The Arts).