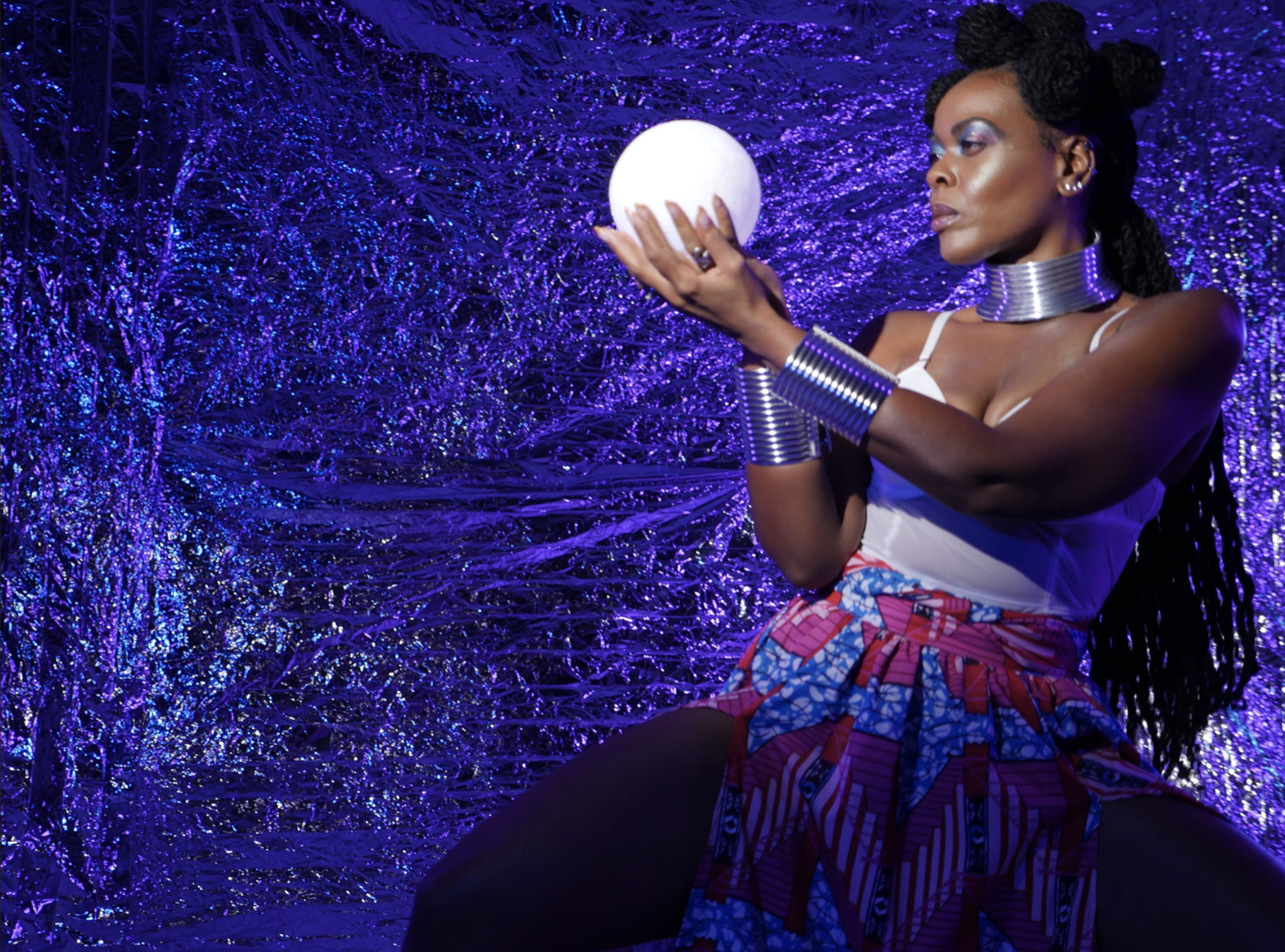 Featured image: A still from, God is a Black Woman by Chaz Shermil Hodges. A Black woman (actress Roni Lowe) holds a white crystal ball against a sparkly purple back drop. She is wearing a blue and pink skirt, a white bustier and silver-ringed bracelets and necklace, suggesting a traditional African attire. Image courtesy of the author. Photo by Salem Daniel.

Chaz Shermil Hodges (also known as, CSS: Chaz Shermil Speaks) embarks on a project around the divinity of Black womanhood as a way to offer ways to heal the wounds created by white patriarchal society on Black women. What follows are selections of Chaz’s thoughts, poems, and film stills relating to her project “God is a Black Woman”.

As 2020 was in full effect, I found herself leaning into my spirituality more than ever before. Like most of America, I found myself at an extreme low during the pandemic. The isolation, race wars, and fractured justice system had me in a tizzy. Not to mention, the mental battles from seeing constant brutality bestowed upon Black & brown bodies.

God is a Black Woman is a public mourning of who and what we have been told we need to be as Black women in American society. It is also a rebirth of every beautiful thing we have ever been. My wish is for you to support this story because it’s one that we have been screaming to tell and yet, somehow no one ever hears. I made this with my friends. I made this with my God. I made it as a peace offering to my spirit in hopes that it would gently touch yours.

The project has resulted in streams of creative writing as well as an upcoming short film, God is a Black Woman, (which is in post-production and is raising funds for it’s completion).

GOD IS A BLACK WOMAN

This is what it feels like to be a woman with love in her skin and
dirt under her nails.

Never trade the beauty of loving in full sentences. Saying it
“with your chest.” The absolutes.

It’s true. It’s solid. No promise ever forgotten. The simplicity of
following your bliss and being influenced from that place. The
world shifts to you. You don’t shift for the world.

There is magic coursing through your wounds. They heal like
you’ve never been hurt.

You may remember the scar even if you no longer sport it. That is
alchemy. Taking the experience for the level up, but leaving the
blood and pain behind.

We learn early from ourselves. Our molecules teach us the beauty
of transformation. In fact, it is the thing that we should be the most
comfortable doing. It’s all we’ll ever do.

The special ones, learn how to do it on their terms.
That is power.
In there, is GOD.

It is robbery to not be equal to God. Every
parent’s deepest wish is that their children
surpass them. -CSS

In a cloud of smoke, I dirty danced with the essence of myself.
Traced the inside of my thighs with warm fingertips, finally feeling
how incredible it felt to let my rose bloom.

I was naive to the fact that I could shake the entire universe with a
touch.

Felt naughty, once again, under shower heads that allowed me to
see shooting stars when positioned correctly.

Before I found Waldo, I found my pleasure.

12 years young when I knew I couldn’t wait to be grown.
Or maybe unleashed.
Why didn’t anyone tell me how to house a fire?

A yearning in the gut of my pelvis. I enjoyed every opportunity to
let it burn.
At age 15, I noticed eyes viewing my warmth, as if I were sending
smoke signals.

I recoiled into my own skin.

Until my ego got a hold of my mystique, and I became enticing.
My first boyfriend was even afraid to touch it. To straddle the
epicenter of me.

I finally understood the phrase ‘too hot to handle. ‘

Skeptical of the embers, I kept my legs closed for fear of setting
the world ablaze.

Today, we’ve all come to know, that’s not such a bad thing.

There is a very thin line separating my
grace from my growl. – CSS

Dear Black Woman,
I adore you.
Your pigment.
The way you crave to be moisturized and freshened with natural
oils only created in the crevices of earth’s aloe.

Encompassing hands.
Rough and smooth and gentle and reliable.
A vision.
A mountain of a man. Unstoppable.
Beautiful Black Woman, your voice sounds as sweet as colored
kids opening Ivy League acceptance letters.

You whip your tongue around syllables like the girls in my hood
play Double Dutch.

With easy swag. The kind that the aura possesses before the
mind even knows it wants it.

Black Woman you taste like black eyed peas and greens for the
New Year.

Greens for the dollars and peas for the change.

And what a beautiful change you are.

Archetypes into Activists.
You come to me like a Monday morning Black Woman.
Starting each new week with the promise of a seven day
evolution.
A midweek revolution and I adore that.

There once was a girl name Darlene,
Who couldn’t fit all that ass in them jeans.

She took them off with much dread,
Rocked a body con instead,
And was still the flyest bitch on the scene.

There once was a rapper named Megan,
Who rap fans worshipped so much that she’s Pagan.
She had the strongest of knees,
Rocked unbelievable weaves,
Slayed tours and brought home the bacon.

Become sea with me.
Let’s stretch across mountain ridges and sand dunes.
You never have to search for an adventure if you become one. – CSS

I will say to my daughter with a stern voice,
Don’t practice pretty.

No fake lashes or false liners.

Do not practice pretty.

Practice poise, so that when you walk into rooms your company
stands in awe of your grace.

Practice languages, to divide the gap of ill understanding between
the melanated and the masses.

Chaz Shermil Hodges is an avid reader, writer, poet, and actress. Originally from Chicago this woke brown girl, made her way to sunny southern California to complete a BA at California Lutheran University and her MFA at University of California at San Diego. When she is not writing, touring regionally, or filming, obviously fish tacos are a favorite! Follow her journey at IG  @ChazShermil.