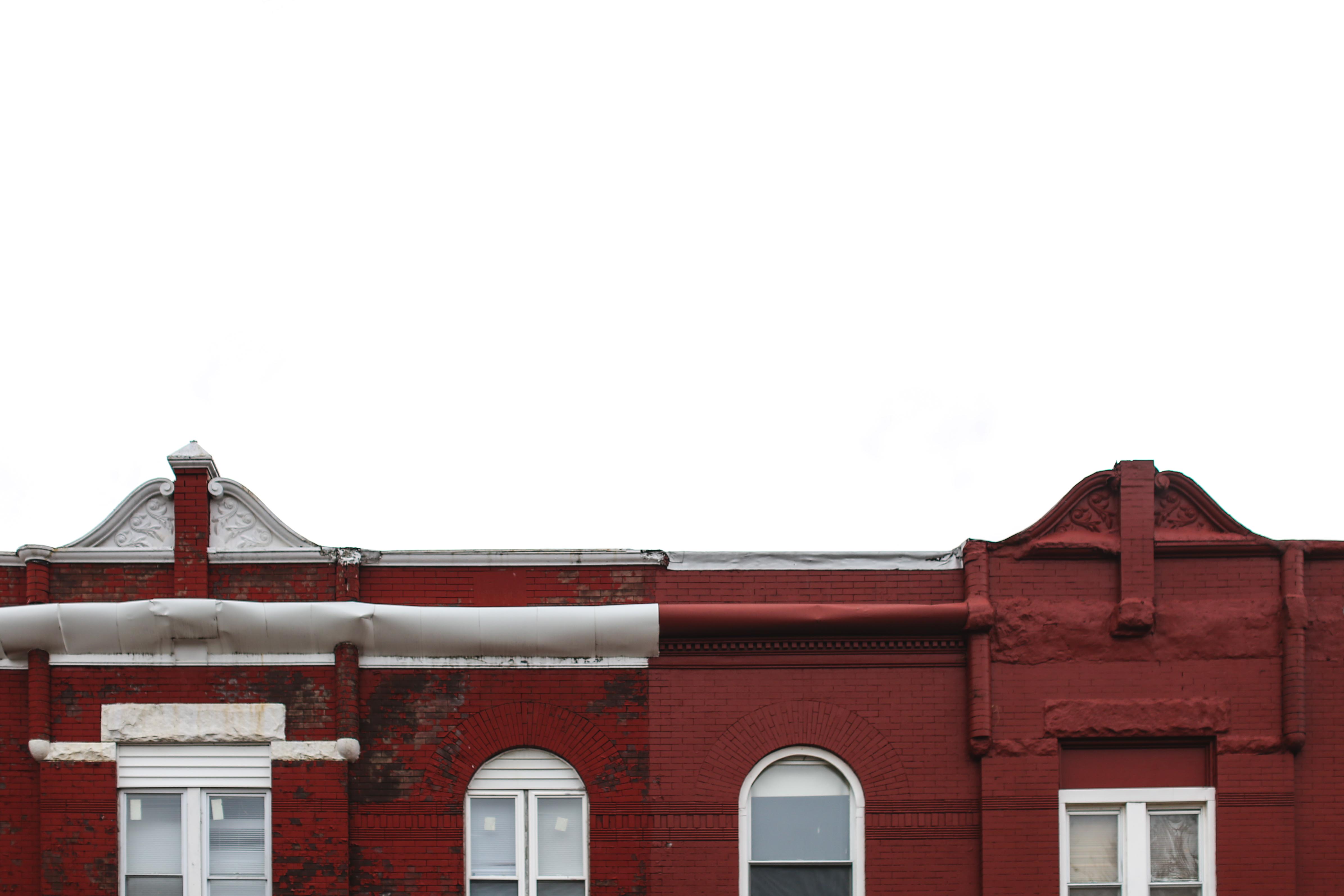 As part of the Envisioning Justice Initiative, Sixty paired writers and photographers with each of Illinois Humanities’ selected community hubs: organizations working within communities around issues of incarceration and justice. One of those organizations is Free Write Arts & Literacy. Going on 19 years, Free Write has provided arts and literacy education to thousands of youth detained in the Cook County Juvenile Temporary Detention Center, as well as providing employment and creative opportunities on the outside. A cornerstone of Free Write’s pedagogy is using poetry and personal narratives as a vehicle for both literacy and self-empowerment. In a society and system that is quick to apply ready-made ideas informed by race, class, and condition, on their lives and fates, Free Write encourages their students to “own their narratives” through telling their own stories.

Below, you will find two poems written by Free Write students last year, prompted by Aracelis Girmay’s “Elegy in Gold.” Taking a cue from the New York Times series pairing photographs inspired by poetry, photographer Chelsea Ross created a series of images in response to the poems. The photographs both illustrate the imagery and mood of the poems, and call attention to the fact that the photographer is able see and document places that the detained young writers can only visit through memory.

You can learn more about Free Write’s history and current work in Sasha Tycko’s profiles published on Sixty.

(1/10) A picture of the tops of two adjoined, red brick row houses against a white sky. 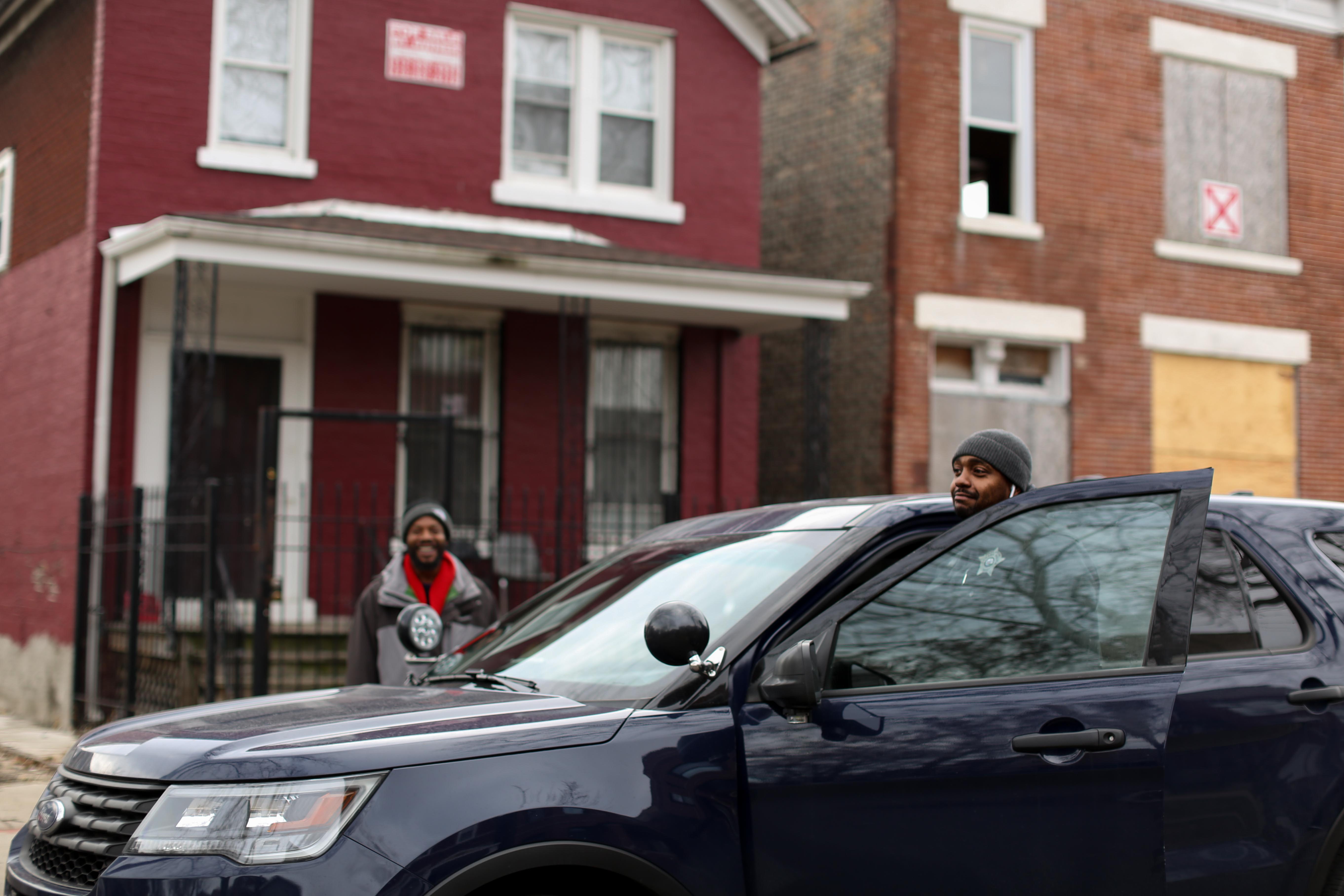 (2/10) A CPD detective stands outside his car. A man stands behind him laughing. 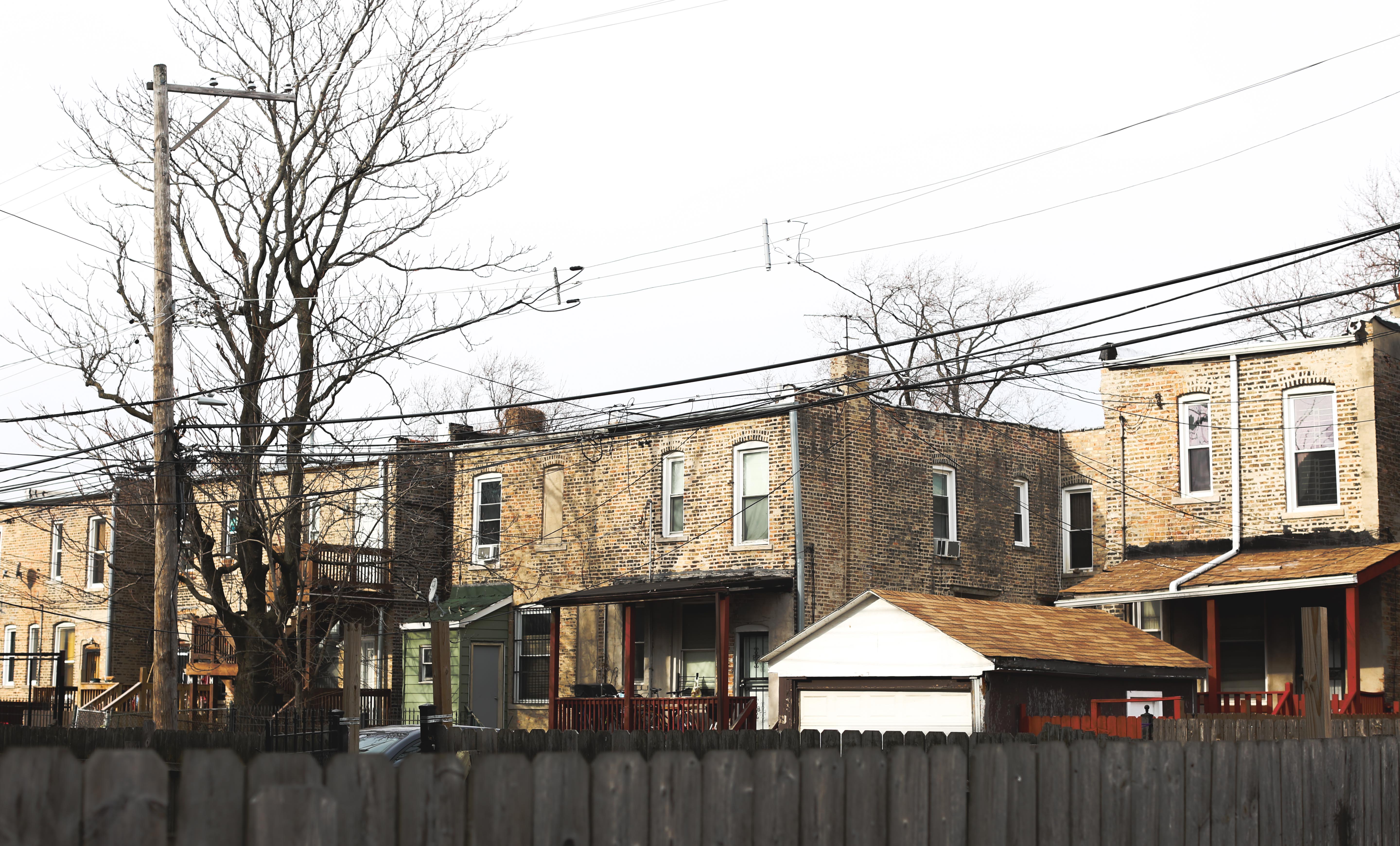 (3/10) A wood fence cuts through the foreground, behind it we past an alley to the back of a row of brick houses and garages. (4/10) An open field adjacent to a brick building. A cable satellite makes a shadow on the building. The image is split vertically down the center by a chain link fence. 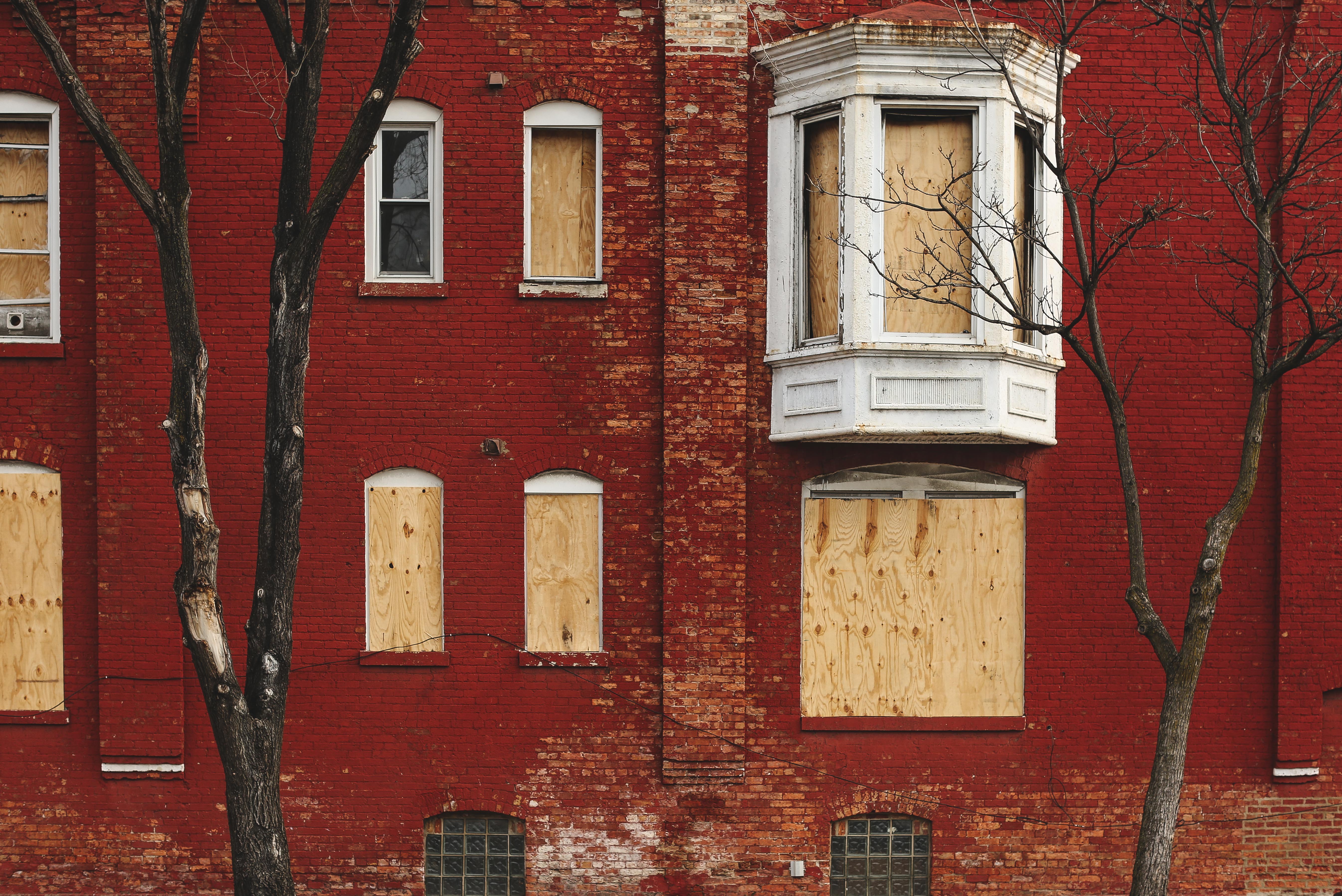 (7/10) The face of a boarded up red brick house, framed by two trees on either side. 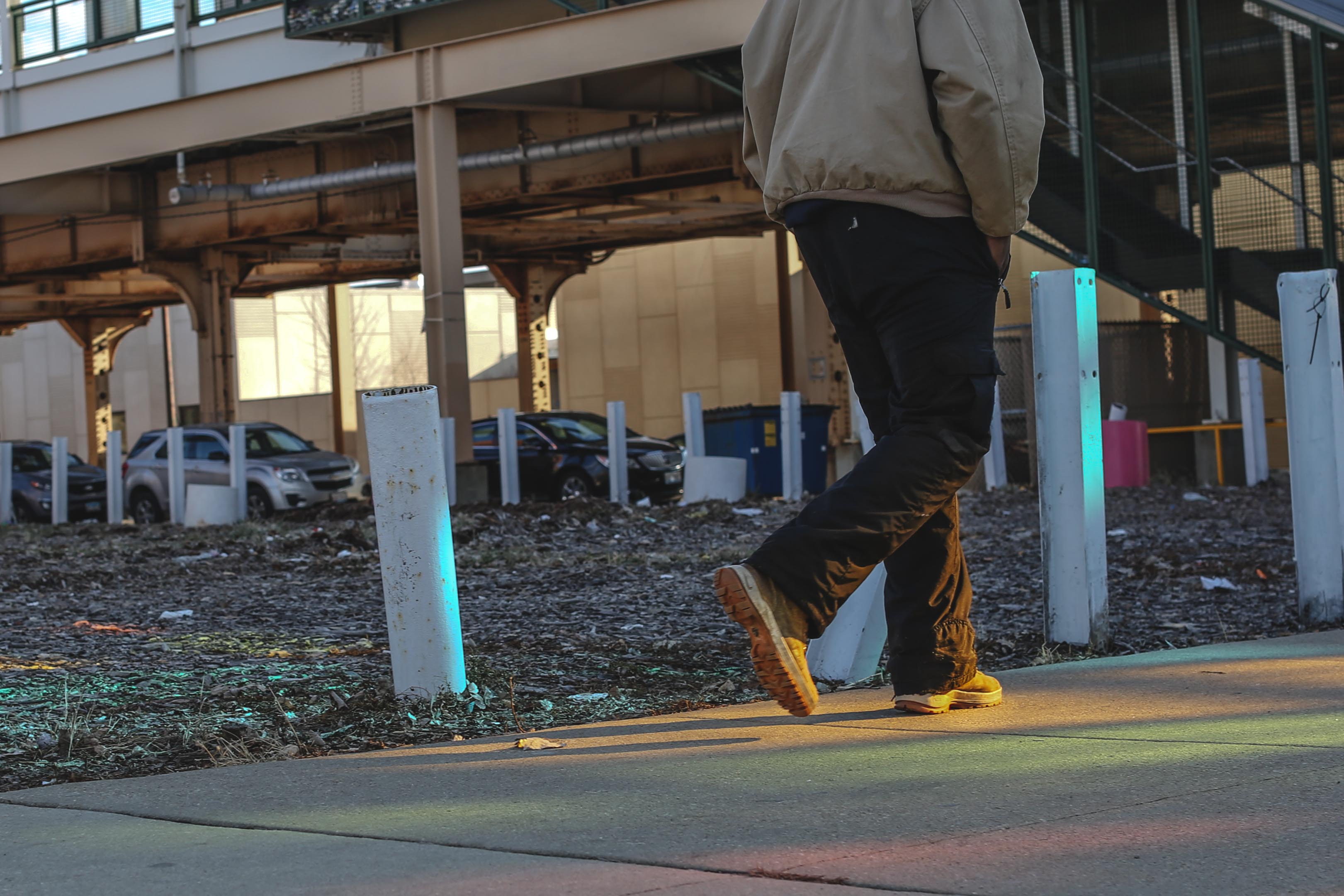 (8/10) A man walks in Timberlands through colorful reflections on the sidewalk, toward the L train. 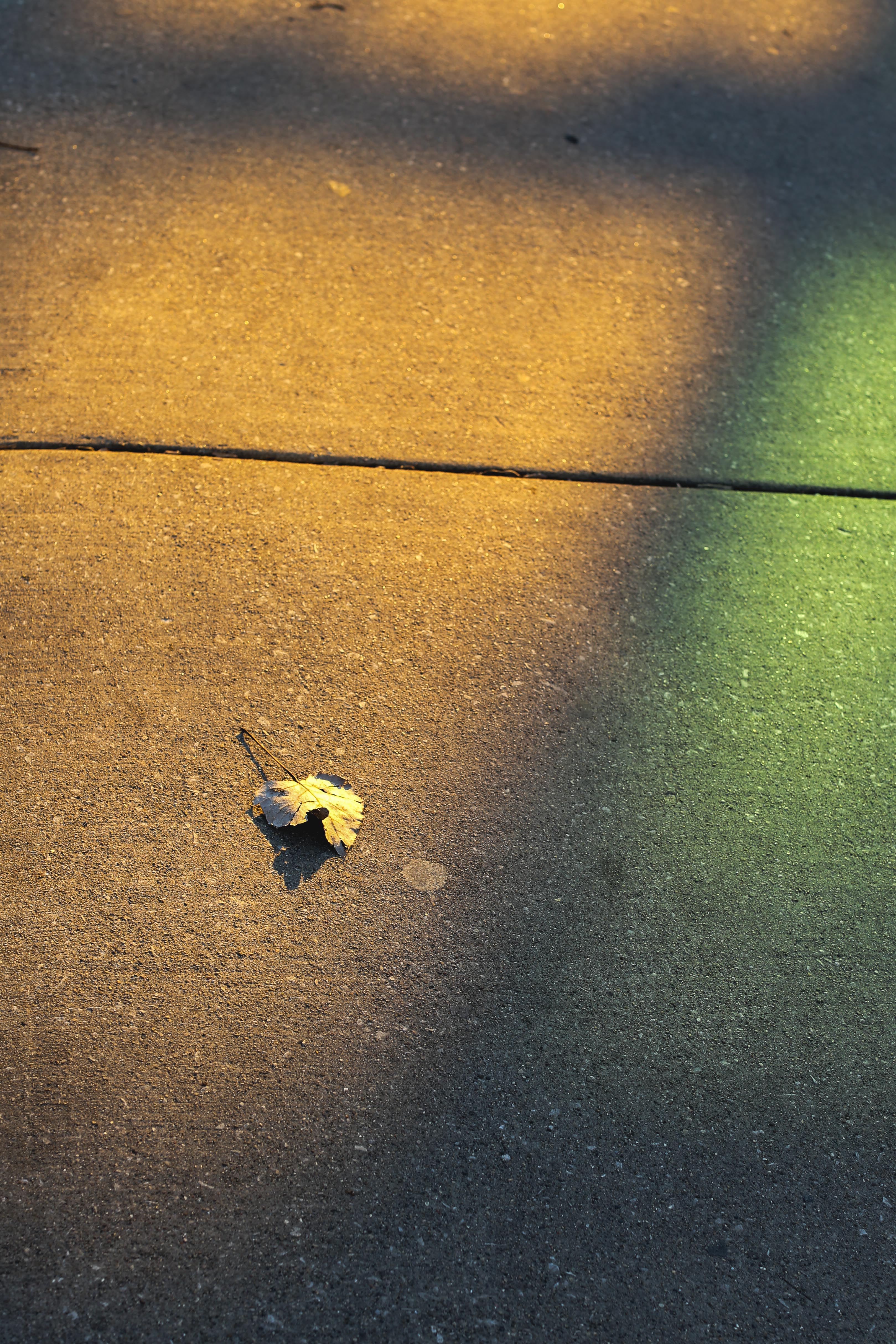 (9/10) A leaf sits on the sidewalk, bathed in colored light. (10/10) Two people stand in an alley in front of a bodega. One wall of the bodega is painted with a graphic mural of black zig zags against a white background. 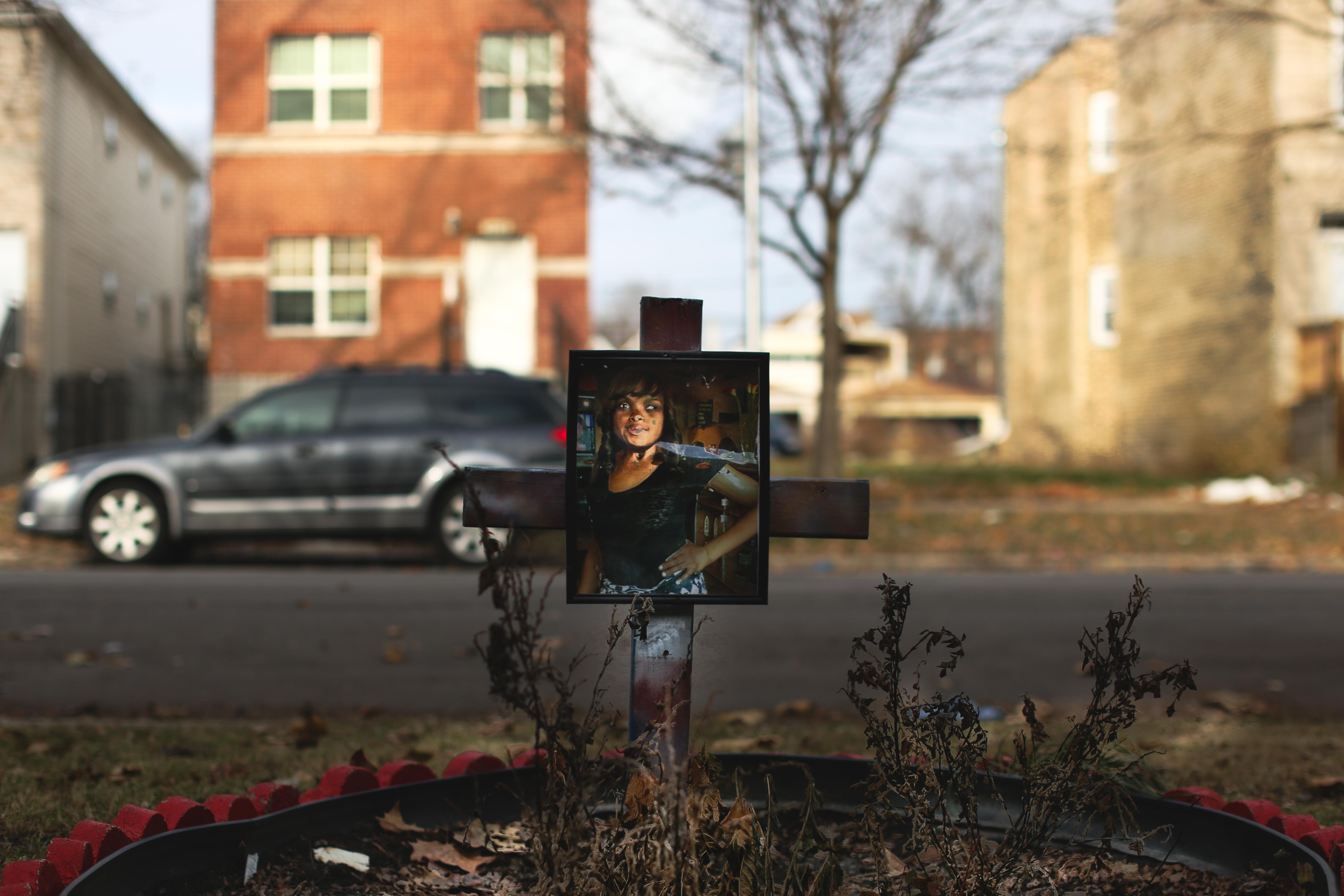 (1/9) In the foreground, a framed picture of a girl hangs on the face of a cross. Behind it, a street with a car, in front of brick appartement buildings. 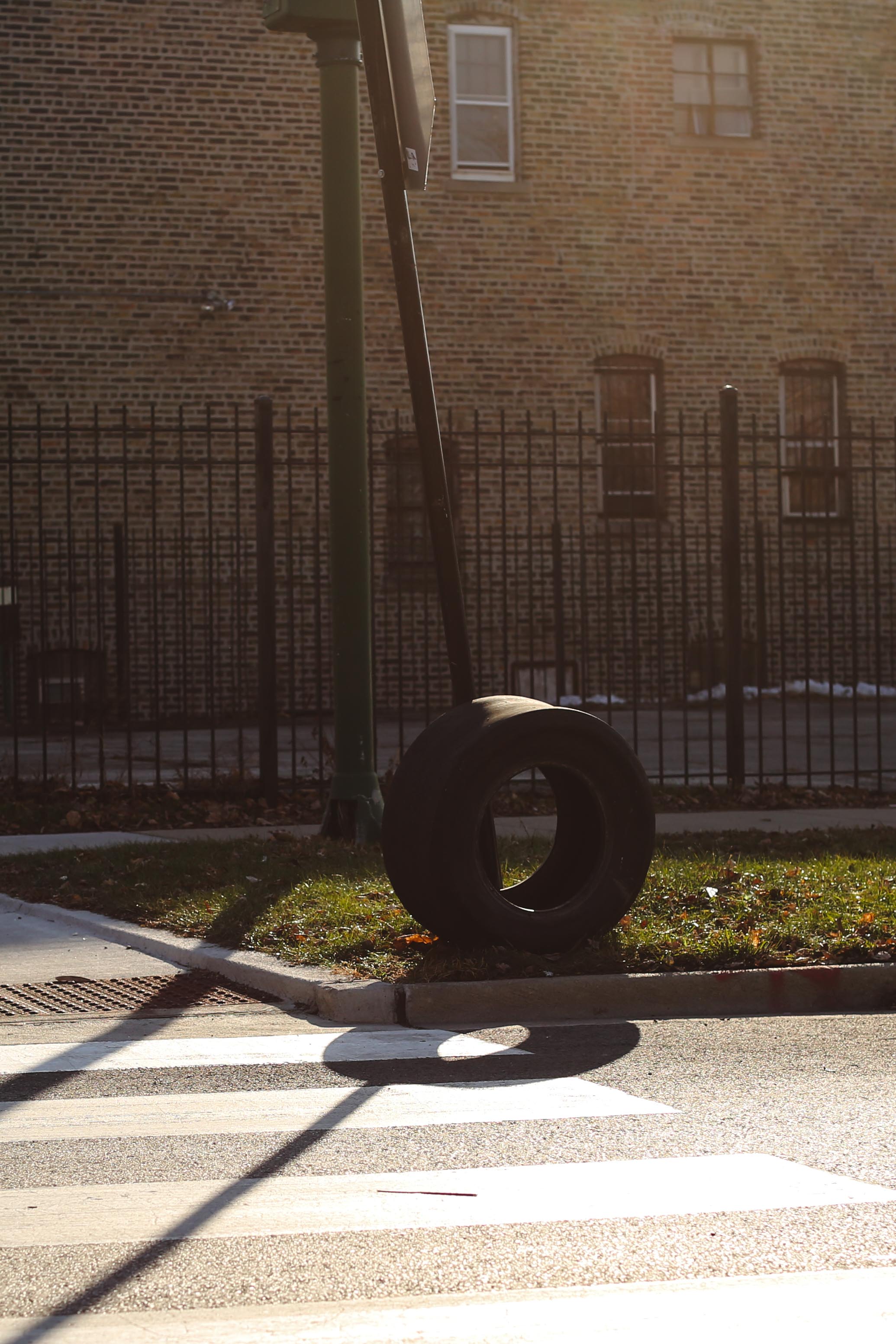 (2/9) A car tire leans up against a stop sign, casting long, afternoon shadows across the street. 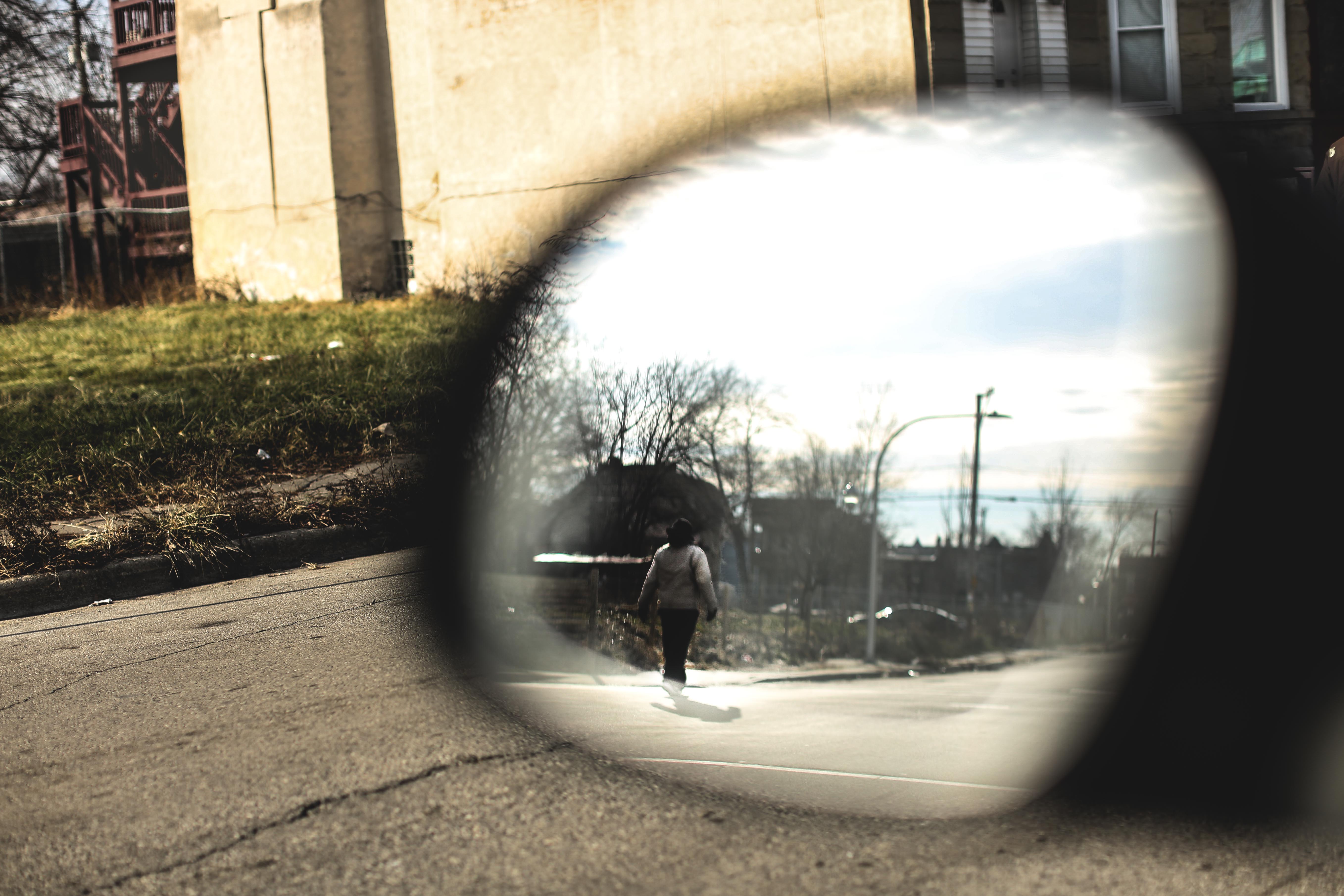 (3/9) A reflection of a man in the rearview mirror of a car, walking away from the camera. Behind the mirror is an empty lot adjacent to a brick building, against a blue sky. (4/9) Cracked pink paint, peeling of stone, looks like desert formations from above. (5/9) A mural painted on a wood fence shows white doves flying around a rainbow against a blue sky and puffy clouds. In bubble letters it reads, “Put the guns down.” Behind it, a basketball sits in front the the L line. The net and fence are sandwiched between two buildings, in an open lot. (6/9) A picture looking through a gangway. In the foreground, the branches of a pine tree are out of focus, leading the eye to an open sage green gate. You can see all the way down the gangway to building behind the alley. 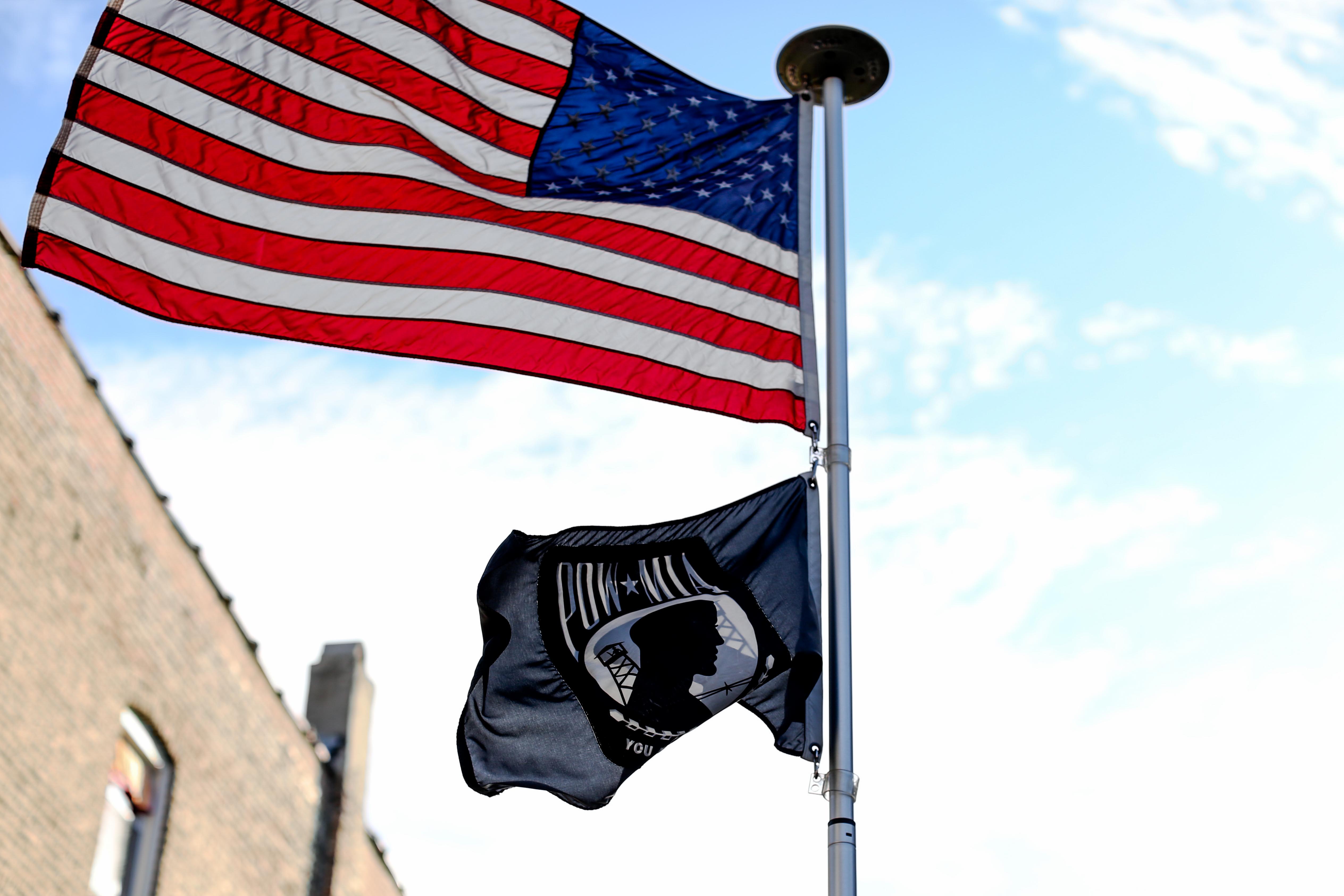 (7/9) An American flag flies above POW MIA flag against a blue sky. The left side of the frame is cut but the top of a brick building. 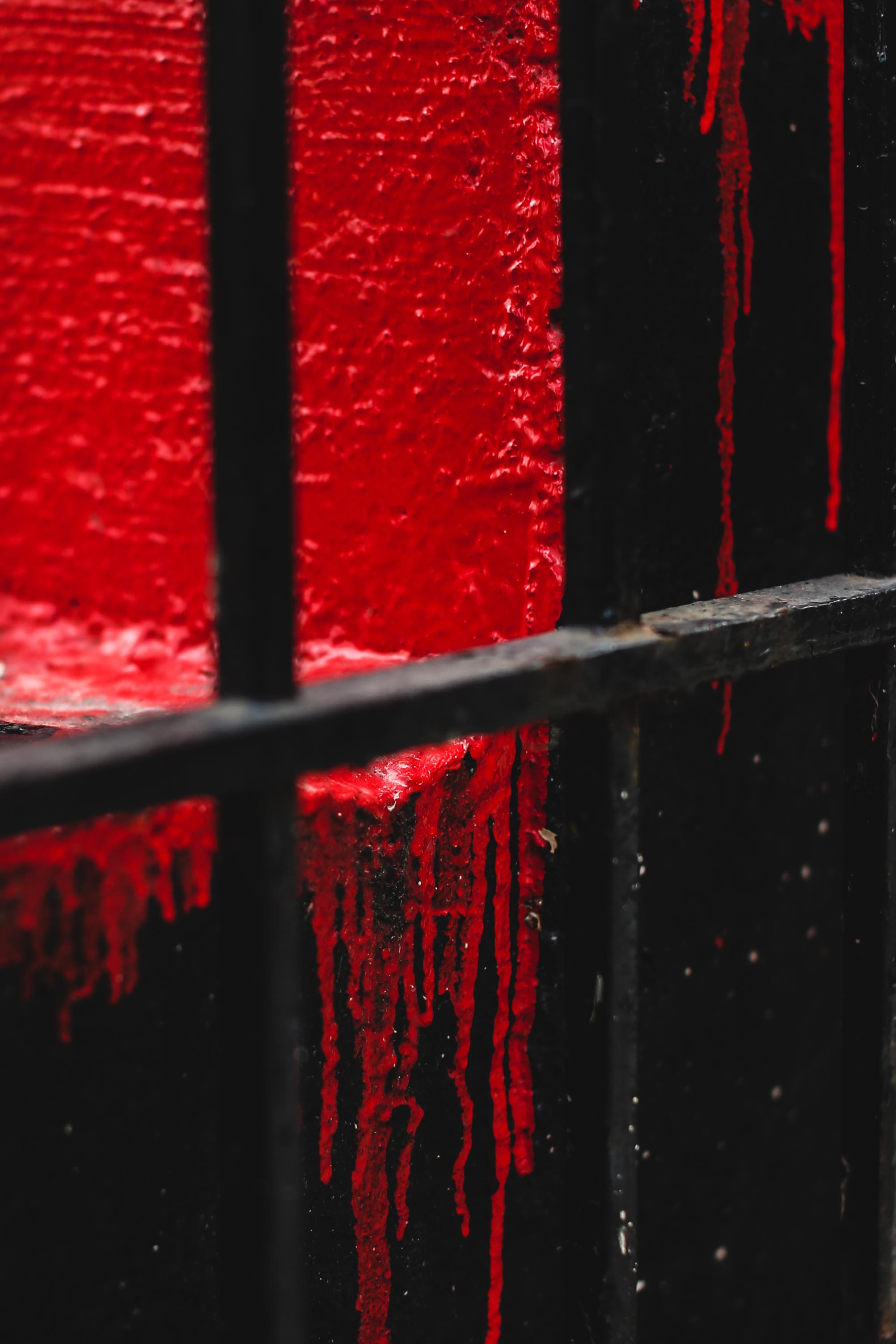 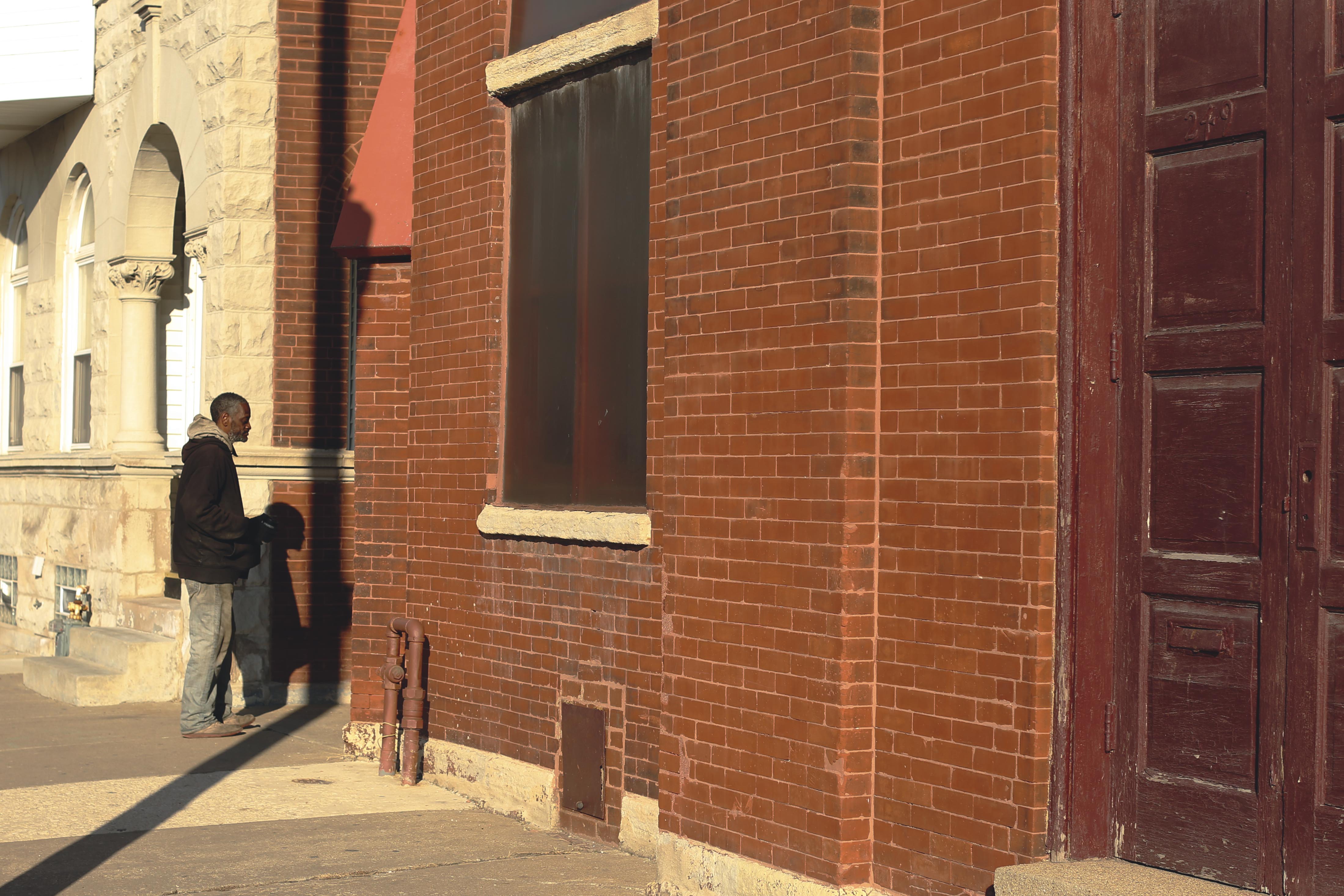 (9/9) A man stands in front a red brick church. He holds his hat in his hands. His shadow is cast long behind him.

and in it is love, hate, killing, and history all together.

I know every block in that town and all,

it’s not a block there I’d miss.

and the people I come from,

family wise and from the guys.

It’s always something going on there.

This article is published as part of Envisioning Justice, a 19-month initiative presented by Illinois Humanities that looks into how Chicagoans and Chicago artists respond to the impact of incarceration in local communities and how the arts and humanities are used to devise strategies for lessening this impact. Chelsea Ross is a multi-disciplinary artist and curator based in Chicago.