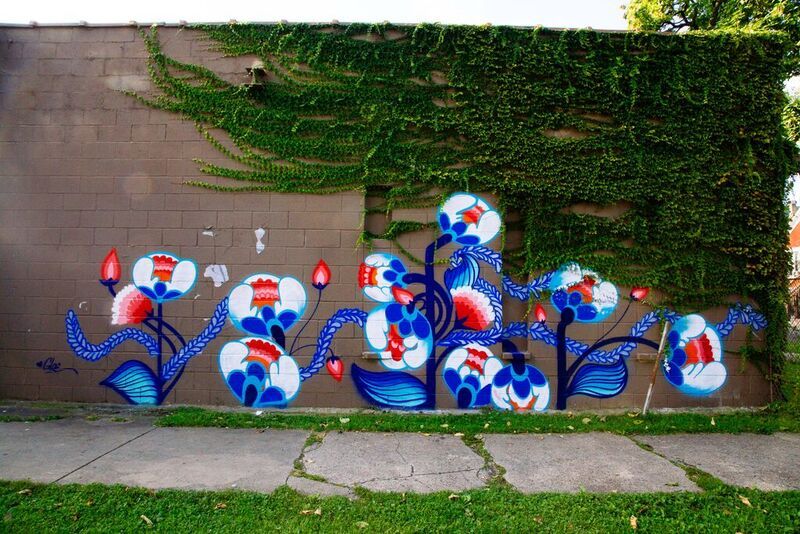 Growing up in Chicago’s Little Village, and Marshall Square specifically, was both a blessing and a curse. Being surrounded by gang borders made witnessing and hearing shootings common – unfortunately it still is. However, these city blocks are solidified by awesome neighbors, who always look after each other.

I believe that my love for nature also grew here. “The Boulevard,” as we call it, was covered by huge trees, many of which are gone now. The football field-size space was where I discovered worms, cicadas, fireflies, dirt, and of course sports.  We had a beautiful couple of neighbors who we called Mr. and Mrs. Z who kept what I like to call an “expert garden,” because of the amount of time and work they spent on it. It was like gold for me. Mr. Z also maintained church gardens nearby. He taught me about flowers: the difference between perennials and annuals and so much more. I must have been about 6 or 7, the age my son is now. In retrospect, I can’t help to but to think about the Z’s when I look at my love of botanicals.

While Mr. Z passed away before Mrs. Z , it was her passing that affected me the most. The day I learned that she had been diagnosed with Alzheimer’s, I immediately made an effort to go visit.  The last we saw each other, she was able to remember my sisters and me. I approached Mrs. Z and gave her a hug as she said hello in a lively tone. I immediately asked her if she remembered me. She said “Yes, I remember you, you’re beautiful, I remember you all,” which relieved me immediately. I might have even let out a sigh. I asked her how she was, and the wind blew in the lovely scent of her purple lilac shrubs that still bloom every spring. Just as the breeze came and went so did her memories. We attempted to converse a few times again, until her nurse told me I had to leave. My eyes watered and I tried to hide the tears as I said goodbye and showed myself out. That was the last time I saw her.

These were also the times when there was no Graffiti Blaster program in place. Besides gardening, Marshall Square also taught me about Old English lettering and the Chicago gangs’ interpretation of them. The effect of that is a whole different story unto itself. I have been scouting, curating, and maintaining walls in Little Village and the Ukrainian Village for street and graffiti artists for quite a few years. The response from neighborhoods has led me to something bigger: to find a solution as an artist to change the visual environment that affects our mood. Our state of mind and overall social health as a community can be maintained and improved by keeping the voice of the community in mind when painting walls, removing gang graffiti, and otherwise affecting the aesthetics of our neighborhoods.

These photos provide a few subtle glances at what I consider visually unhealthy environment. Brown painted walls have become a familiar sight to many Chicagoans, specifically in neighborhoods that are notoriously known for criminal activity. These images were captured in the often overlooked and ignored Marshall Square area. On the City of Chicago’s website, the Graffiti Removal Program is put into the category of anti-crime and beautification programs that depend on the community, neighborhood clubs, chambers of commerce and so on. But brown paint does not beautify anything. These brown walls diminish the integrity of our communities. In just a five-block radius of an area in Little Village alone, you can find more than 20 walls that are patched up or completely painted in brown.

In the effort to heal the landscape of the community, I began painting floral murals. I reached out to business owners and homeowners whose walls have been victimized by territorial gang graffiti and later buffed out by the City of Chicago’s unpleasant looking brown paint, and asked permission to add flowers to their walls. I have found that many businesses and community members feel like more can be made of a brown wall. Specifically, I spoke to Maria. She was wearing a V-neck lilac collar blouse, perfectly creased brown slacks, and her brown loafers. Her eyes look tired, her height reached just to my shoulders, and she was very friendly.  She is from the 2300 block of S. Whipple Street, and has been living in the area for more than thirty years. She introduced herself to me on the day I began to paint flowers on the 2301 S. Whipple Street wall.  Maria conveyed her appreciation for the artistic additions, saying, “I like what you’re doing, it would be great to see more people take care of the neighborhood. I feel like we are abandoned and the city doesn’t do a good job of helping us out. I am the one that comes to clean out here. I feel like they need to make a better effort of hearing our needs.” Sure enough she was picking up all the garbage that was stuck on the fence and the small patch of grassy area next to the curb. She mentioned that although it does help to cover up gang-related graffiti, she is not a huge fan of the brown painted walls. I continued to paint and felt a sense of accomplishment to hear that she approved of my work.

I also spoke with Joaquin Hernandez, who has been living in the neighborhood for more than forty years. He caught me off guard as I was stepping back to review my work. “So you’re the one painting these beautiful flowers? They are coming out great!” He was elated to wake up to two marigolds I began to paint on the 2257 S. Troy Street’s loading dock. ” When you’re done, you can come across the street to paint more over at my building,” he remarked jokingly. I told him I was not joking, that I would love to paint more more flowers there too. While I didn’t get to speak to him too long, I did find out that his garage had been tagged with gang symbols more than a few times and one day he came from work to see that the city had come to spray his garage in brown. He said he hates it and that it ruined his door. He joked that his garage door was old and creaky but that now the brown paint made it ugly.

Their approval allowed me to further explain more of my process to them – as far as why I chose to paint flowers.  Flowers have been symbolic in many cultures when honoring the dead; they are supposed to show support during difficult times. And just like nature, flowers help us heal. We bring flowers to show our appreciation to friends and family. All around the world you’ll find flowers inside businesses. These small touches of nature that surround us, die, and don’t always make it past a few days. My intention is to have long lasting colorful flowers on walls by which neighborhood kids—our future leaders—walk and ride their bikes. These walls are meant to inspire them, and nurture their curiosity.

I have always felt like brown buffed walls insinuated negative connotations; a sign that something undesirable was there or something bad happened there, like a crime scene outlined by chalk. Not only are these brown walls detrimental to the aesthetics of our communities but they are also a constant reminder that we live right around the corner from Cook County Jail, which sits on 96 acres on the 2800 block of South California Ave and is the largest single site jail in the United States. With all their glitz and glamour, brown walls manage to bring the institutionalized feel of this facility into our streets. The real unpleasantness is the symbolic meaning it has for me and many of the residents of my neighborhood. It has always brought me a feeling of isolation. Traveling through different neighborhoods in the city I notice many of them are without these buffed walls, without the potholes and all the things that tend to go hand in hand with urban blight.

So I decided to be a part of the solution. I saved up and began my flower mural project. The walls I am currently painting have been brown since the very beginning of the Graffiti Removal Program’s existence.  Adding flowers which will stand through the toughest of winters is a symbol of how a community truly deserves to thrive. Unlike a patch of brown paint that serves as a temporary band-aid, these walls will blossom and their color will live on.

A community needs attention, a community needs love, and a community needs healing. The feelings I had on the last day I ever spoke to Mrs. Z were a nice little mélange of emotions or “the feels” as the youth might call them. I wanted her to remember me, and not just for a minute or two. I wanted her to know that we knew each other and that at some point we were a part of the same world. This is what every neighborhood deserves. To be given the chance to strive and be a part of the all-together brighter picture that is painted of OUR city. As I move forward with this project, the bigger picture is to continue activating spaces with the neighborhood and artist community. This is the real beautification project.

Gloe is driven by a combination of her competitive nature and rebellious spirit, in the year 2000, she began using the streets of Chicago as her coloring book, painting the moniker Gloe far and wide, preferring to keep her artwork in the street. Shortly after, she traveled to other countries to do the same. While Gloe never received traditional art schooling, she credits both old and new mentors, influences from the street and her tenacity for reading and studying history as being vital to her success. Her skill and dedication have opened doors for her to work as a lead teaching artist in organizations like The National Museum of Mexican Art’s youth initiative-Yollocalli, Marwen, Southwest Youth Collaborative, Arab American Action Network, Progressive Arts Alliance in Cleveland and other community organizations throughout the country. There, she instructs as well as mentors youth through Urban Art focused programs. In 2006, with the support of Synergy, an all women hip hop collective she co-led and curated the first all-women graffiti ephemeral mural in Chicago’s South Side. Because Gloe’s style writing was gender neutral her technical skills and high caliber work paved a way for other women graffiti artists in Chicago. She is a mother, a wife, archivist, wall scout and public artist who works with aerosol, acrylic, photography and collage. She is also a proud member of the Mujeres Mutantes Collective.