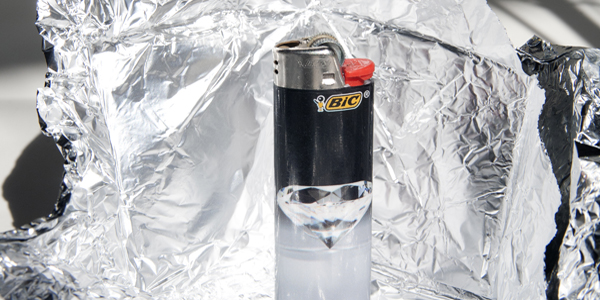 David Brandon Geeting is a Brooklyn-based photographer who has an interest in creating art from mundane, everyday objects.  Geeting moved from his home state of Pennsylvania to New York in order to pursue his BFA in Photography from the School of Visual Arts, which he completed in 2011.  His photography made its first appearance in Chicago earlier this year while taking part in the group show, Temporal Figuration, at LVL3 Gallery.  Geeting’s work will return again to Chicago and be featured in  November 2 show, Everyday Always Trying, the first show by the new curatorial project, the Coat Check, at David Weinberg Photography in River North.  The show is curated by Matt Avignone and will feature David’s series, Leaky Faucet Metronome.

Lydia Shepard (LS): How did you get started with Photography?

David Geeting (DG): I grew up in the suburbs of Bethlehem, PA.  It’s one of those places where there isn’t much for teenagers to do.  I played in bands in basements and skateboarded; I was into that scene.  My friends were always taking pictures.  My high school offered a photography 101 class where we got to use the dark room.  That class was basically the highlight of my day, and I became very fond of it.  At the time, I wasn’t really thinking about image content or anything like that.  It was more like being in an alternate reality, being in the dark room and being able to escape.  It’s funny because now that doesn’t really play a part in my work at all,  but at the time, I thought it was great.  So, I ended up applying to a few art schools with the intention of majoring in photography.  I got in to the School of Visual Arts, and I really liked it.  I liked it because it seemed like it wasn’t as “by the books” as some other schools,  it seemed more open and I had more freedom.  So I ended up going there, and I moved to New York in 2007.

LS: Your artist statement says that you are inspired by “cheap entertainment, middle-class luxuries, and assemblage as a remedy for boredom.”  What is it about these things that interest you?

DG: Growing up, I was one of those kids that felt bored, but I was also okay with it.  I am fine being by myself and daydreaming; I am easily amused, even though I know that things aren’t very exciting.  For me, making art shouldn’t cost more than a dollar.  I think that if it does, than it isn’t real art but more like luxury art.  I’m not interested in that.  I am surrounded by these weird inanimate objects that I don’t really give the time of day, but they sit next to me in my room everyday.  I started working on work that looks like this after I graduated because I was super broke and I didn’t really know what to do, even though I had all of this creative energy that was pent up and I had no way of utilizing it. I started making still-lives out of these things, like a roll of tape and scissors, or a piece of dried pasta. Basically, I would take photos of whatever was sitting around. It didn’t really matter how arbitrary they were because I figured that everything is kind of arbitrary anyway. There is no reason to not make work just because I don’t know what it’s about yet, so I figured that I should take these photos and then figure the rest out later.

I always liked these commonplace things though, because I feel like everyone has these relationships with them but they don’t really talk about them.  You put the same foods in your mouth everyday, you tie the same shoelaces everyday, yet people don’t really expand upon their relationships with these things.  That is what I am doing.  It was kind of an excuse to experiment with things that people normally get bored of, and I might as well use them for another purpose.

LS: How did you get involved in the Coat Check Show here in Chicago?

DG:There is this very specific online photo community.  I don’t even know where it stemmed from, probably Flickr.  It started about four or five years ago.    So, there is this specific online community of people who don’t really know each other in real life, but they all follow each other on the internet and follow each others blogs.  Matt (Avignone) is one of those people, but I guess he is more legitimate because he actually has a space that he wanted me to show work in.  That is how Matt found me, probably by seeing my blog or my website.  He thought that my work would be a good fit for his show that he was curating.  He just sent me a Facebook chat saying that he had an offer for me to be in a show in Chicago, so I called him back right away.  He told me about his show and I was into it.

LS: Is that how you often get involved in shows?  Is that a common practice?

DG: The invitations aren’t usually that casual, but it’s also not rare.  Of course, that definitely wasn’t the case in the 80’s before the internet became a big thing.  I do think it is very telling of our generation, that it can be that casual and that you can get an offer to participate at a legitimate commercial gallery through the internet, or the opportunity to sell work through a Facebook chat.  I like the nonchalant feel of interactions like that.  I feel like even in my work, I don’t take things too seriously.  I have a lighthearted attitude.  So I think that the whole thing is very fitting.  I responded to it because I like that he took that chance to just be like “why not”, instead of sending me this cordial email, and I don’t think that’s very necessary anyway.

LS: If someone wanted to come out to NY and see your work, where could they find you?

DG: Maybe they could give me a call and we could hang out.