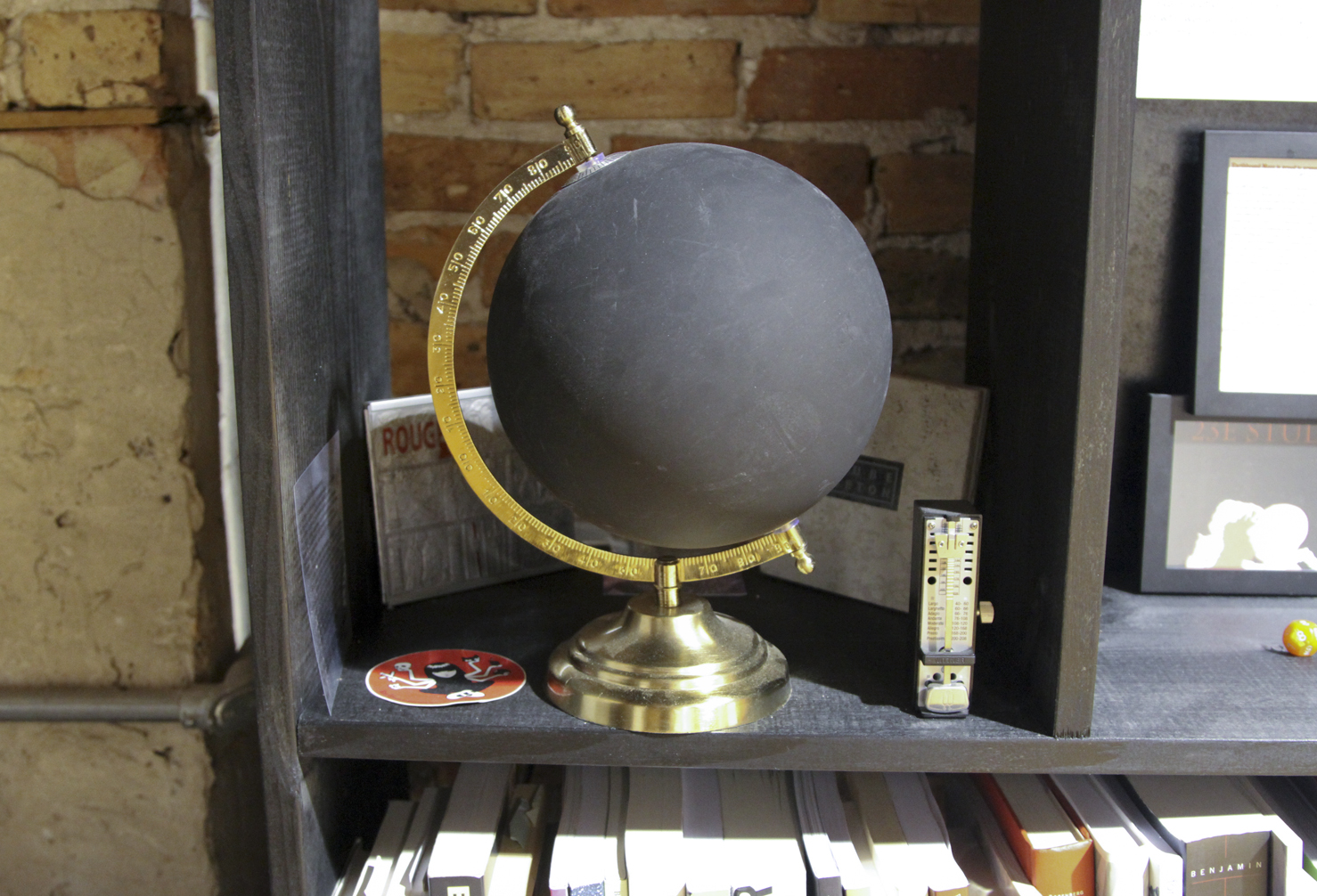 Earthbound Moon (EbM) is a collaborative organization whose stated aim is to “terraform the Earth” by transforming its surface into a non-contiguous sculpture garden. They propose to undertake this re-purposing, or rather this perceptual shift (for their concept of “sculpture” is generous), over the course of a hundred generations. This is a radical expansion of the time-scale usually involved in evaluating the possibilities of cultural production. It is a time-scale reserved for geological histories, an ecological positioning not lost on EbM.

Earthbound Moon is consistent in contextualizing their work in the history of everything. The entire show at Ballroom Projects is organized as an archive of the organization: its projects, its resources, its library, its collection, and its influences. The archive is organized as a timeline that stretches back to the Big Bang, represented as a tiny white dot on the floor protected by a haphazard masking tape square. Their work is contextualized in the large fabric of all time. They describe years in which they are working to 5 values, dating a work ‘02014’ rather than ‘2014’. In gestures like these, they make as much room for the expanded future as they do for the expanded past. This is also evidenced in their self-proclaimed 10,000-year plan, as well as in the signing of 99 year leases and the purchase of land on which they construct the pieces of the sculpture garden. They took an immortal form in the 501c(3) incorporated body so that they can live to see the 10,000 year plan unfold. EbM’s conception of history is vast, universal, and objective, but it leaves room for intensely personal and locally specific histories to be recorded in the same ledger. A neon 8.5”x11” sheet of paper invites viewers to add sticky notes to the timeline of the show: their own insertions into the history of the universe. I added the Stonewall Riots, but others added abstract or subjective historical moments like “The moment I first realized I was ‘A CATCH’.” This attempted synthesis of collective and subjective is consistent in EbM’s vision. This same dialectic of universal and specific plays out in their relationship of planet-as-site and place-as-site. Their project descriptions indicate involvement with local communities and concerns, but ask those of us in the archive to consider Blesdoe, Texas in new relation or likeness to Evanston, Illinois. EbM makes a footnote of this universalizing gesture in one of their texts on display, acknowledging places are not identical to one another. Their aim in creating likeness through sculpture-gardening is to create “understanding” and “connections between contrasting communities.”

It behooves me to explain the implicit understanding of what art is and what it can do in the EbM cosmology. Before I do, permit me the criticism that the idea that “encounter” will yield harmony and understanding is too simple. It falls flat next to the complex dialectics at play in other areas of this work. It also forecloses an agonistic world in which the commons is a place to struggle, productively, indefinitely, for hegemony that is never total and always contested. Much about EbM’s propositions are utopian, which so often necessitates a limiting of difference and discord. Art, for EbM, not only acts as a bridge between different cultures, but also calms the encounter and create a space of lower stakes than an unmediated encounter with difference. It also works as a bridge from the individual to the collective and, nested neatly inside that antinomy, as a bridge from the subconscious to the conscious mind. I learned this by inference, reading the abundance of tight didactic texts printed on photo paper and installed in what appeared to be science fair displays constructed in mismatching gator board and foam core.

It should be reiterated that this show is an archive, and not a site in the network of sites that make up the non-contiguous sculpture garden. As such it was treated in the language of museums of local history. The displays are meant as prototypes for crates that unfold into lossless displays. The resulting form is a trapezoidal diorama on a plinth, to be reductive. It opens to the viewer, who must look on one at a time or in twos due to size, and on all its offered surfaces text printed on photo paper describe a different function or branch of EbM. The didactics are thorough, considered and frankly convincing. They are written in the soothing but ominous first person of the institutional “we.” However, the institutional “we” does not erase the palpable sense of the personalities of EbM. One of the didactics explains that a library, which makes up the entirety of the East wall, is the archive of EbM. This is composed, the text goes on to read, largely of the personal collection of Lee Sparks Pembleton, a founder of the group. Thus, the impersonal “we” becomes intensely inflected with specific taste as the library is eclectic and full of specificity.

EbM also plays music through the duration of the show in a radio stream of their “archive,” again part institutional collection but mostly the sonic description of a few individual collectors. This is another delicious dialectic of absent figurehead and present personality. The EbM permanent collection of artworks is also on display and it paints a vivid picture of personal leanings. It is fascinating the way EbM vacillates between blowing open the field in which art is made and participating in its tropes. I am surprised to see collaborating artists described first as terraformers in this parafictional reality of EbM and second, by their boring art bios that include where they did their BFAs, MFAs, solo shows etc. I am delighted by the many tones that the viewer gets to navigate when thinking through this show. I feel the same dissonance between the ambition of the project (its scope, its seriousness, its actuality) and its manifestation in Ballroom Projects as a relatively ad hoc presentation. This friction between modes of self-presentations productively confuses familiar symbols of legitimacy and power. The expansive perspective of history and future implicates culture in the fate of the planet, effectively troubling the invented and deeply entrenched divide between the spheres of “culture” and “nature”. EbM’s project, which circulates as much in the guise of art as reality, is delightfully ambitious and multifaceted, rife with productive contradiction. Strangely, the art described in their project is the only realm devoid of that delicious complexity EbM is so adept at practicing. Kelsey Harrison is a Chicago based sculptor and itinerant scholar. Her work deals mostly with the subconscious and emotional experience of space and stuff and the sitelessness of contemporary luxury in architecture, urban planning, and interior design. Harrison received her BFA from Purchase College, State University of New York and her MFA in Sculpture from School of the Art Institute of Chicago.