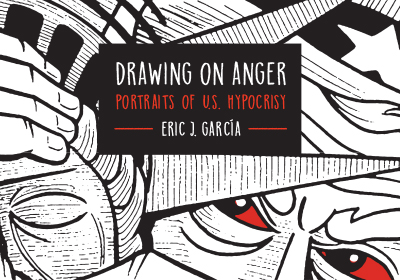 Eric J. García combines art, politics, and history in his work, creating sharp critiques of the U.S. through a Chicano lens with the goal of educating and challenging the viewer.  And it’s his ability to draw the connections between history and contemporary politics that make his work especially powerful. As an artist, García creates using a variety of media including printed posters, sculptural installations, public art, and political cartoons. Some of the work from his long-running and incisive political cartoon series, El Machete Illustrated, was recently published in a collection called Drawing on Anger: Portraits of U.S. Hypocrisy by Ohio State University Press. I got a chance to ask him about the process of creating this book, how his work challenges traditional political cartoons in the U.S., and the importance of collective anger.

Jennifer Patiño Cervantes: Can you tell us about your book? How did it come about and how did you come up with the title?

Eric J. García: “Drawing on Anger” is the best of my El Machete Illustrated series of political cartoons from the past 12 years. It was Frederick Aldama at Ohio State University who was the one that made this book possible. Dr. Aldama is the leading authority of Latino comic books and offered me the opportunity under his new series Latino Graphix. My publishers from Ohio State Press were the ones who actually came up with the title for the book. It fit perfect because anger and frustration are what motivate me to create political cartoons. Image: Eric J. Garcia, U.S. has NO Empathy, El Machete Illustrated. A black and white cartoon showing the Statue of Liberty with a skull face holding up one hand to bar a woman while holding her child in the other hand in the opposite direction. The child shouts “Mama!” while the statue says “mis hijos,” meaning “my children.” Barbed wire stretches along the Statue of Liberty’s arms and the fabric of her robes flow into what appears to be the Rio Grande. Courtesy of the artist.

JPC: What drew you to political cartoons to begin with, and what is driving you to create in this political moment?

EJG: I grew up reading comic books and the funnies in the newspapers. But it wasn’t until I was studying Art and Chicano Studies at the University of New Mexico that I finally combined the two. I was painting political and historical narratives during that time. Then I saw an ad in the student newspaper for an editorial cartoonist. I figured this could be a strategic platform for unveiling histories and critiquing the U.S. through a Chicano lens. What drives me right now is what has driven me since the beginning: to expose hypocrisy and make complex political issues digestible for the public.

JPC: Your work has a perspective that you don’t normally see in most American political cartoons — a transnational perspective.

EJG: Yes, being a Chicano gives me a unique lens to look through. Being part of the Latino community but also born and raised in the U.S., I see things from an angle of an “outsider” and an “insider.” Image: Eric J. Garcia, Cambia, Nada Cambia, El Machete Illustrated. Three figures stand, one inside the other. The external figure is of a red conquistador raising a sword in one arm and holding chains in the other. The next figure inside is of a white Uncle Sam holding a dollar symbol in one arm. The third figure is of a blue police officer holding a baton. All three figures appear to hold the same chains. A small Puerto Rican flag appears in the right-hand corner. Courtesy of the artist.

JPC: Can you talk about how your work challenges the tradition of political cartoons in the U.S.?

EJG: I would like to think my political cartoons are not your normal political cartoons. I’m not making witty punchlines about the most current or popular issue. My cartoons are focused on the issues that are not given the spotlight. Or I’ll reach back into history to help explain why things are happening in our present situation. These unique angles on cartooning are very much in contrast to what mainstream U.S. cartoonists are creating.

JPC: You are super versatile as an artist. You also do sculptural installations, prints, and murals among other things. Was there anything about creating this book that you were surprised by in comparison with other mediums you have worked in?

EJG: I was surprised by the sheer amount of cartoons I have accumulated in the past 12 years. That’s a lot of drawings! And, I only picked my 10 best from each year. So I have so many other cartoons that didn’t make the cut. Image: Eric J. Garcia, Home Grown Terror, El Machete Illustrated. A black and white cartoon showing the Statue of Liberty hammering up wooden boards that say “The Border” while Uncle Sam holds a semi-automatic weapon and peers through the boards. He says “We need to secure our borders and arm ourselves. The terrorists are out there,” while handing a handgun to a klansman in a white hood. Image courtesy of the artist.

JPC: Your cartoons are really great at documenting what is happening and channeling how many of us are feeling. Can you talk about the importance of collective anger in this moment?

EJG: If U.S. citizens only knew half of their ugly history, there would be collective anger all the time not just in this moment. Collective anger is what pushes against the establishment and forces change. Unfortunately, too many people right now are not angry enough about what is happening to this country. So I don’t feel like I am doing a good job of “channeling how many feel.” We live in a society that is so distracted and apathetic towards others that change is not coming fast enough.

Featured image: Cover image for the book Drawing on Anger: Portraits of U.S. Hypocrisy. Eric J. García. Detail of the Statue of Liberty with her eyes closed while a red-eyed Uncle Sam peers menacingly at her from behind.  Courtesy of the artist. 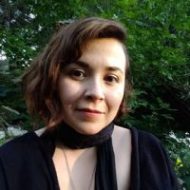 Jennifer Patiño Cervantes was born on the Southwest Side of Chicago with roots in Mexico. She is a freelance writer, poet, and Director of Operations + Archives for Sixty Inches From Center. She graduated from Columbia College with a degree in Art History and double minors in Poetry and Latino/Hispanic Studies. She is currently pursuing her MLIS at the University of Illinois at Urbana-Champaign.