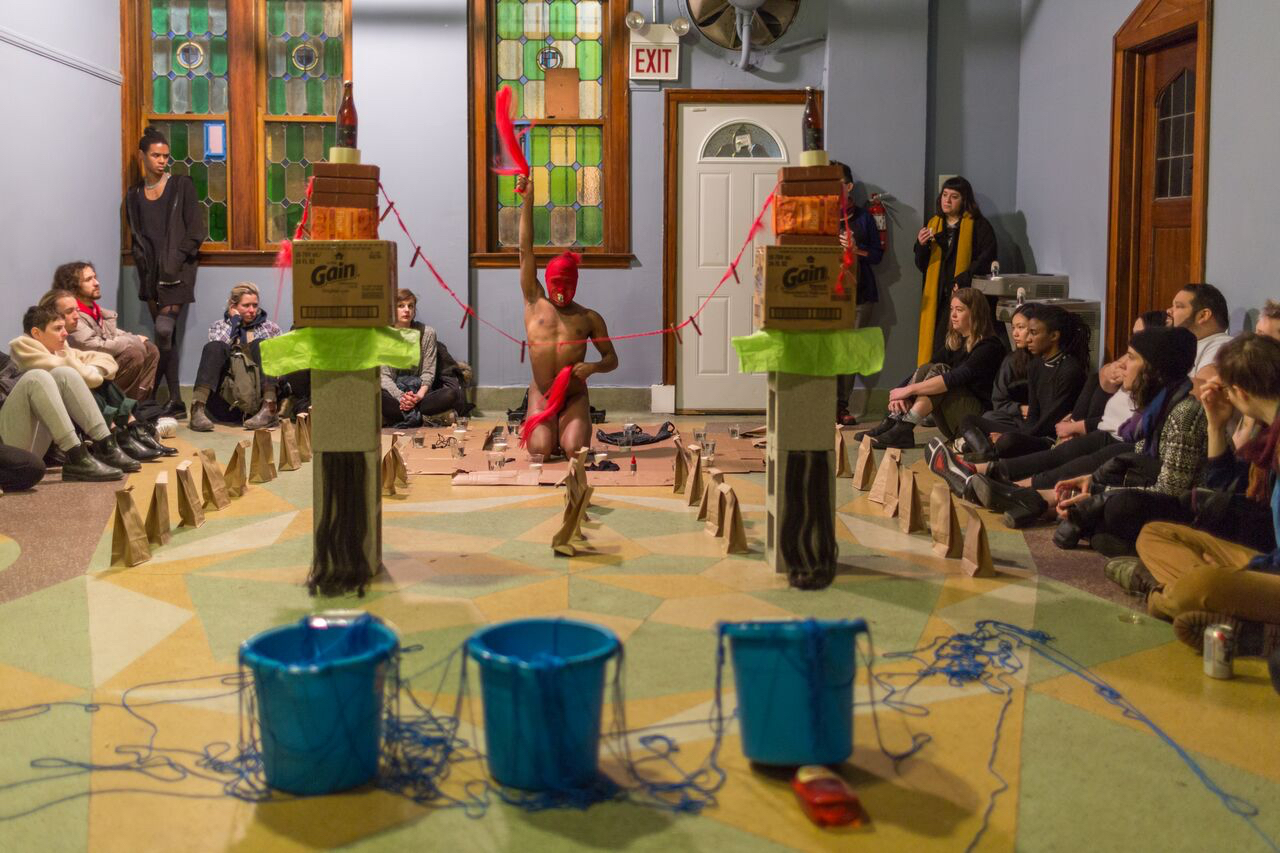 Distance is Not Separation begins with the artist, Keijaun Thomas, naked. Although at times “clothed” by rope, a garbage bag, and packing tape, these makeshift outfits often accentuate this nakedness rather than covering it. There is not a moment during the performance where we are not forced to deal with the material reality of a black body before us. But the nudity isn’t designed to shock. Instead, this nudity makes the body malleable, such that it is able to take on a variety of different roles. Throughout the course of the performance, Thomas takes on the forms of the hairdresser, the janitor, and the “exotic” dancer, giving these professions a depth they all too often lack. The intervention is a welcome one, especially when the tradition of Western art history, of which we are for better or worse the inheritors, has bequeathed us hardened stereotypes in the place of living, breathing human beings.

The first figure explored is the dancer. After a series of stomps and claps, Thomas begins to sing, “Somebody come tip her, she’s dancing like a stripper.” The phrase is repeated over and over until the audience finally gets the hint, leaving tips at the artist’s feet. Forming a fan with the bank notes, Thomas rests for a moment before pulling pantyhose over her head. One of the dollar bills now covers the artist’s mouth, silencing the voice that had just asked for it. Apparently money plays a vexed role in the life of this dancer: although she needs it to survive, accepting it also reduces her to an object whose speech we are not interested in hearing. Next, we meet the hairdresser. The artist dons a red wig affixed to similarly red pantyhose. While the material again obscures the face, the long ponytail cascades down the performer’s body. Thomas goes on to chop off much of the hair with a pair a scissors, referencing the manual labor performed by the hands of the hairdresser, albeit in a much abbreviated way. But the voice is silenced for a second time, as the artist stuffs the shorn hair into her mouth through a hand-torn hole in the pantyhose. Though many of us are accustomed to the awkward banter between customer and hairdresser, this hairdresser has likewise been muted.

Towards the end of the performance, Thomas introduces the janitor. Once again, the mouth is a focal point. First, Thomas sprinkles a trail of flour the length of the performance space, before inserting a broom head between her teeth. Lying on the ground, the artist’s body has become the broom’s metaphorical handle. Through slow and painful movements of the head, Thomas begins to sweep up the white flour with the black broom. As service workers, janitors labor in the background; we see the result of their work, but do not engage with them directly. The decision to highlight the bodily component of cleaning is poignant, as it is precisely the body that is worn out in such jobs, through the gradual transformation of corporeal wear and tear into (most likely minimum) wages. While the sight is grotesque, it becomes even more disconcerting once we register that this is only a slight exaggeration of the positions of many in our society. If Thomas’s characters are oftentimes deprived of their voice, perhaps it is in order to transfer some of the performer’s voice to the audience. From the beginning, the artist refuses to let the audience members occupy the merely passive position of observers, enlisting them instead as co-participants. At one point Thomas wanders around the space with cups of water and glue, silently asking viewers to pick one. If the latter is chosen, it is poured onto the artist’s body, the former into the artist’s mouth. When I am given the choice between water and glue, I wonder whether it’s because I gave a tip earlier. But as Thomas winds around the space, I begin to realize that she’s only targeting masculine individuals. The realization attuned me to all of the other sorts of participation elicited throughout the performance. Were other people being selected on the basis of gender or color? Although the involvement of the audience feels democratic, Thomas helps us recognize that who gets so called, and when they are called, is ultimately in the hands of another. What does it mean to work together in a world striated by racism, sexism, and heteronormativity? There may well not be definitive answers to these questions, but they are certainly worth grappling with, and art is a place for us to engage in this grappling.