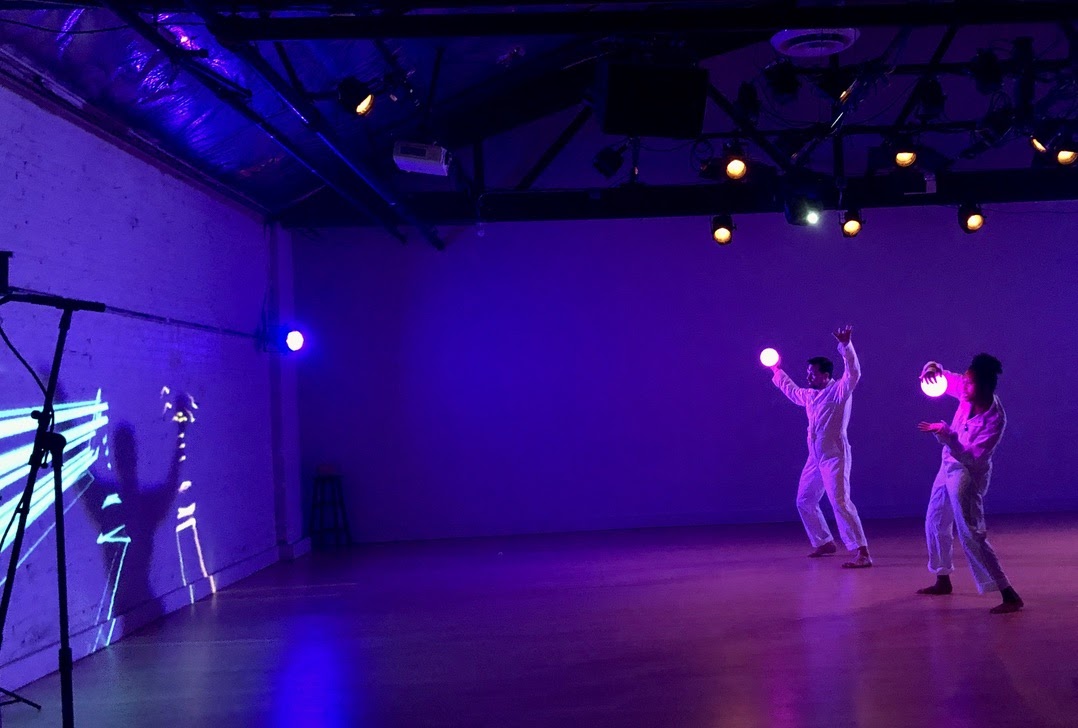 Featured Image: Selena Lasley and Christopher Knowlton, members of Team A, wear white coveralls. Each artist holds an orb that is lighting up in their right hand. The orbs are attached to a machine that tracks their movements as lights projected onto a wall, which they both face. There is a microphone stand in the foreground. Photo by Links Hall.

A program of Links Hall, Links Lab is an ongoing series of performance-media projects devised by Chicago dancers, performance artists, storytellers, musicians, filmmakers, technologists, designers, and multi-disciplinary visionaries. Two teams of makers had fifteen days to devise, rehearse, and perform original hybrid works in October 2021. Links Lab is funded in part by an EXPLORE Grant from the Arts Work Fund for Organizational Development.

Devising as an ebb and flow. Pause and attend to breath. Envisioning what else may be possible beyond current discourse. Devising as thinking obtusely, following what is felt even when it cannot be named. Otherwise approaches, somatic methodologies. As a writer, curator, and artist, devising is an opportunity to delve into ideas while drawing on the energies of the present and past, always interwoven and looping into future happenings. Listening to impulses without second-guessing is a creative and generative gift. The term “devising” was positioned as central to the description of Links Hall’s Links Lab Project and this informed my approach as the embedded writer. Most definitions for “devising” refer to the process of planning or inventing through a definite manner, systematic or operating according to careful thought. These definitions feel restrictive, limiting what the process might look like and are counter-intuitive to my understanding of devising as practice. Seeking other definitions, I asked several of the artists what devising meant for them. They shared reflections on the Links Lab performance experience and these responses animate this meditation.

Selena Lasley offered a beautiful reminder that devising is an opportunity to sit with the unknown, recognizing that so many restrictions are self- or socially-imposed, and there is power in embracing the limitlessness of creativity. Following Lasley, I think of devising not simply as a means to an end, but rather as a continuous state of being, rooted in doing, feeling, and experiencing in response to the worlds we live in. Growth through process does not just demonstrate a change towards something else, but also a returning to different versions of ourselves, with a better understanding of how those moments and influences from our lives show up again in reconfigured ways.

The importance of vulnerability to the process of devising kept showing up as I observed the ways the Links Lab team members engaged each other. They worked through ideas, difference of perspectives, and navigated the balance between the individual and the collective. It is hard to believe they had not worked with each other before, each artist coming into the space carrying a presence that felt deeply intimate. When speaking with Ricki Jay, she shared how important it is to be open to building relationships with each other and finding a synergy. Forging this kind of trust, especially over such a short period of time, also means laying bare one’s anxieties. It’s all part of it. Devising is a continuous state of being, always in the process of growth and learning as you go; often that means making mistakes. When something did not go as planned, the teams at Links Lab leaned into it as an opportunity to devise, and not a diversion from an already established plan. The spontaneity was refreshing, amidst so many different modes of verbal, bodily and affective communication. In team A’s performance, except for the stage manager Siobhan, all the artists were involved in different scenes of the performance. The fluidity with which they were able to occupy different roles brought a dynamic texture to the performance-making, centering intuition as part of the devising practice.

Traces remain in the rehearsal space after everyone leaves. What happens to those shared energies conjured during the performance? Do they dissipate or are they taken up by those who enter the space next? Observing both teams move through the same space in different ways on the rehearsal days, I wondered what residues were absorbed. This reverberation of creative energy that usually fills the studio space has been dormant for so long due to the COVID-19 pandemic, and it was refreshing to have the feeling of creative process-making wash over me once again. Robyn Wilson described how the experience reignited an energy in them, a chance to dance again and be with other artists and an audience. Relaying what devising means for them, Robyn said, “I think devising is different each time, but I think for this process in particular devising has meant rising to the challenge. Rising to help one another and really digging into each other’s ideas. Devising forces you to strike a balance, and build from that balance.” Robyn’s perspective is often how I think of improvisation, rising to respond to another’s actions in ways that are more visceral and relational. It is a form of vulnerability, and it can be both exhilarating and scary.

Witnessing the process of performance development for each team during the Links Lab Project was a chance to think about devising as a critical form of creation. As Selena Lasley expressed, “In this world, this structure of society, it’s against us, so fighting back and just working with that (devising), grounding ourselves into that and understanding that it’s the greatest tool to have within ourselves.” Devising can involve both creating as a collective and an exploration of the interior self. It is a chance to flow with and work through feelings that may be suppressed in order to traverse a society that seeks to discipline rather than nurture curiosity. What can happen if we give ourselves permission to draw on this tool of imagination, believing in possibilities that are undefined and still to come?

I do not idealize improvisation and devising, since that would gloss over the various power dynamics that shape the practice, informed by different positionalities that are, among other things, racialized and gendered. I quote artist mayfield brooks at length as they discuss the tensions in improvisation spaces and their work through the interdisciplinary dance project “IWB=Improvising While Black.”

I get really turned off by the way that there’s an assumption around touch, instead of an invitation. There are underlying issues like aggression and sexuality within the realm of touch. In jams, I can feel all these things, but there seems to be no awareness around the historical trauma that is inside of touch. With Black people in this country, that distress is just part of the landscape. What would happen if that traumatic history was acknowledged in a Contact jam? (2016:35)[1]

Could the Links Lab Project also become a site to grapple with some of these difficult questions. At a time when touch and proximity are particularly charged due to COVID-19, brooks’ words gesture to the reality that for many this anxiety of violence is always lurking in their daily existence. Devising is not only an opportunity to experiment, but also reckon with the differences that shape the ways we move through the world. Can we hold space for difference, sit with the irreconcilable and envision more equitable forms of relation?

It’s a unique performance viewing experience when you have seen the piece transform over a series of rehearsals. This reflection is a gesture towards some of the moments from each performance that moved me. Both performances draw on beautiful, contemplative soundscapes that create an atmosphere of quiet depth. Video projections onto the theater walls expand the space beyond the physical limits, giving the mind an opportunity to wander. Flowing in and out of haunting red lights, Robyn Wilson and Jasmin Taylor’s movement sequence forges a space between tension and release, embodying Team B’s theme of growth into a future that cannot be predicted—recognizing that devising will always be crucial. It leads into the next scene with other members of the team entering the stage, their voices rising to fill the space. They recite, “What is today but yesterday’s tomorrow”, first in unison, then progressively moving into different pitches and tempos, as the phrase becomes unintelligible. My attention shifts away from the words themselves towards a recognition of the collectivity that comes with a mutual uncertainty of what tomorrow will bring. The precarity of the future is colored with humor as Spence Warren and Oz Ecford employ puppeteering to wrestle with a new reality in which humans and machines become more intertwined, a cyborg era. Jasmin Taylor sings a solo with a powerful vibrato that emphasizes the texture of longing, wanting to go home while being unsure of where or what that home may look like. Team B’s piece closes as the members lift Taylor into air, carry her across the floor and slowly lower her to the ground, crouching around her as a protective unit that signals the intentionality of community.

Team A’s video projections featuring Vic Wynter feel like a glimpse into an interior, playful world. As Lasley and Christopher Knowlton enter the projections, their movements resonate with a curious experimentation that happens when one is allowed to just be, without the external pressures of performing for a public. This is amplified when Lasley and Knowlton begin their live performance, manifesting a vibrant, boundless energy that is in conversation with the videos projected around them. The Links Lab Project explores a hybrid viewer model with both a live and virtual audience, thinking about what performance events may look like as the pandemic continues. By incorporating several recorded videos in an interplay of projections, Team A frames their piece as an interconnection of the live and virtual, rather than merely a circumstance of the current moment. It is an indication that performance will adapt and carry on amidst shifting global conditions. The vibrant energy of Lasley, Wynter and Knowlton is taken up by the entire team through the final video, as their silhouettes appear on the rear wall of the theater. For a few seconds everyone on the team dances, bodies vibrating together and encompassing a sense of communion through devising that I witnessed throughout the rehearsals. There is inherent value in bringing artists together to devise, recognizing the importance of creating and generating knowledge through process. I hope to see more opportunities like the Links Lab Project support artists to approach devising as a space of contemplation and art making, as we navigate worlds that will continue to challenge our sense of self and collectivity.

Gervais Marsh (they/them) is a writer, artist and curator, from Kingston, Jamaica, whose work is rooted in Transnational Black feminist theory/praxis and deeply invested in Black life, concepts of relationality and care. They are a PhD candidate in Performance Studies at Northwestern University and their research engages the work of several Black queer visual and performance artists who explore questions/frictions of intimacy to envision otherwise possibilities of existing in the world, while holding the irreconcilable violence of anti-Blackness. They have published writing in ARTS.BLACK, PREELit, Performance Response Journal and ART+ WONDER Magazine.