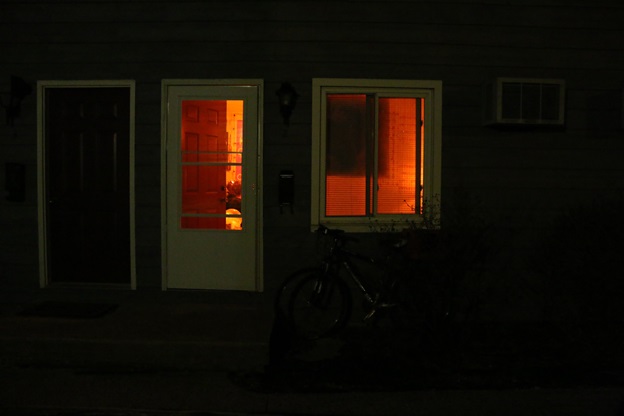 Sam Comerford
“[The orange party] lasted one night from 8:30 at night to 4 in the morning. People came and went throughout the night; we danced, sang, talked, ate, laughed, and opened a piñata. The event functioned as an art happening. Regan King and Felicia Cannon were the two artists who brought in their “work”. The happening was a kind of a self-aware themed party. So often in our lives we attend themed parties of all kinds, some cheesier than others. The point of the orange party was to both be a themed party but also point to the silliness of themed parties. We had a piñata, party games, friendship bracelets, we wore crowns, and there was confetti everywhere. It felt like a grown-up children’s party.”

Regan King
“I think the night was interesting. I was desperate to see it in the context of a show, and that’s something I think I still cling to. I think it was a draft though, that it could be…more orange, more obnoxious or insistent.

“I think having a theme was more important than the theme. “Felicia and I both agreed on adhering tightly to a theme and thinking about what that means. I think there is something interesting about pointing a finger at theatrics or facade especially in our contemporary environment where corporations and institutions are curating all sorts of theatrics to control their consumers. I know that’s a reach but it’s what I was thinking about while attempting to overdo the orange! I think Felicia and I also felt comfortable with orange because it was simple and not already claimed by any large political or social groups. It was sort of free of most association. I think if anything, Felicia and I hopefully left the impression on future artists, using extra/ordinary\space or any apartment show or unconventional space, that they aren’t limited to art on a wall; artists should push the expectations of what a show is. I loved Jake’s filming the entire night. I loved seeing people and having your neighbors over, who didn’t know what to make of the space and had less to work with than any of the guests invited. I liked the little light tricks, like the cheese balls appearing white under orange light. I liked the reflective confetti littering the carpet. I liked that people weren’t concerned about squeezing in when seating became limited. Those are my highlights.” Brady Adams
“This was the first occurrence of a happening at extra\ordinary/space, fostering a culture of art activity that goes beyond the gallery. So what specifically does ‘self-aware,’ as Sam put it, mean in this case? Throughout the year, the space has hosted a variety of student work and pop-up shows. The parody of a themed party made room for students on ISU’s campus to have conversation about aesthetics and art’s purpose in the everyday. A pop-up that existed merely overnight differs from one that exists in ‘public’, or on university property. The group collaboration was intended to promote an intimacy different even from open submission shows. The space itself is highly contingent upon the basis of ephemerality, as student apartments are not in many ways suited for sustainability. For the creators and hosts, there seems to be a need to continuously explore what ‘work’ constitutes in a livable space and how this understanding has developed over two previous shows.” Sam Comerford
“There were no true works at the party. Regan painted a tiger for ‘pin the tail on the tiger’ and brought confetti and a variety of orange snacks. Felicia brought orange balloons, friendship bracelet party favors, the piñata, party crowns, and lots of confetti. This is the third art party that has taken place at extra\ordinary/space, and it was the first art party that took on the characteristics of a happening. Each other show has been set up like a gallery show, but on display within the apartment. This party took on participatory elements, and while Felicia made a sign to hang on the wall and Regan hung her painted tiger, the orange party functioned more as a party than an art show. It was a wonderful night and party that existed somewhere in the space between art and party.”

Brady Adams
“Painting geared toward games, activities, and crafts was included as part of a participatory environment. Party favors were significant in emphasizing creative exchange, focusing more on the people than the objects: any decoration ultimately served the purpose of creating an informal place for friends to gather. This was not necessarily an institutional critique, but raising questions of accessibility, visibility, and community participation/celebration as the school semester comes to a close. For many involved, this signals a time of transition after college.” Brady Adams
“Existing as an interdisciplinary place of gathering, the conversion of the apartment is also meant to transform a space as home galleries do. It originated as a fundraiser; now it acts as a place to host the ideas and collaborative effort of visual artists on campus. An interruption of the domestic and interjection to alternative art spaces on campus, extra\ordinary/space brings new forms of vulnerability and security to the local art collective. There is a party planned to complement this one, to follow it up as a parting event as this space comes to an end.”

Sam Comerford
“I got started wanting to have shows in my place last year after we hosted a fundraiser in my apartment for Cometogetherspace in Bloomington. My friends from every area of campus and every discipline came together at my place. Stephen Ramberg and Whitney Johnson created a cave structure in my living room space. By the end of the night we were making music and telling scary stories in the cave; it was unlike any other college party I had ever been to. I got hooked. When we returned to school this past fall, I decided to have the first party with several of my friends within the Illinois State University School of Art and School of Fashion. Since then, I have had only one other show in addition to the orange party. Every party lends itself to interesting conversation, and allows for all kinds of things to happen—karaoke and stick-and-poke tattoos, to just name a few of those things.

Bloomington/Normal Arts Collective is one of Sixty’s Regional Partners. Brady Adams is currently a BA Creative Writing student at Illinois State University. He works as a content writer at a local web development company and self-released a chapbook of poems in 2015. Brady is a member of the Bloomington/Normal Arts Collective, a group of artists in central Illinois that seeks to establish an alternative scene for showing work, including artist writers that wish to maintain a thriving dialogue in the area. Samantha Comerford is a senior art history major at Illinois State University with a focus in contemporary curation. She is co-founder of the Bloomington-Normal Arts Collective, and runs extra\ordinary/space, an alternative art space, out of her apartment. She currently works at University Galleries, and has had experience at James Harris Gallery and MOHAI in Seattle as well as cometogetherspace in Bloomington-Normal. You can follow along with extra\ordinary/space, and some of Samantha’s other projects on the BNAC website. bnacollective.com