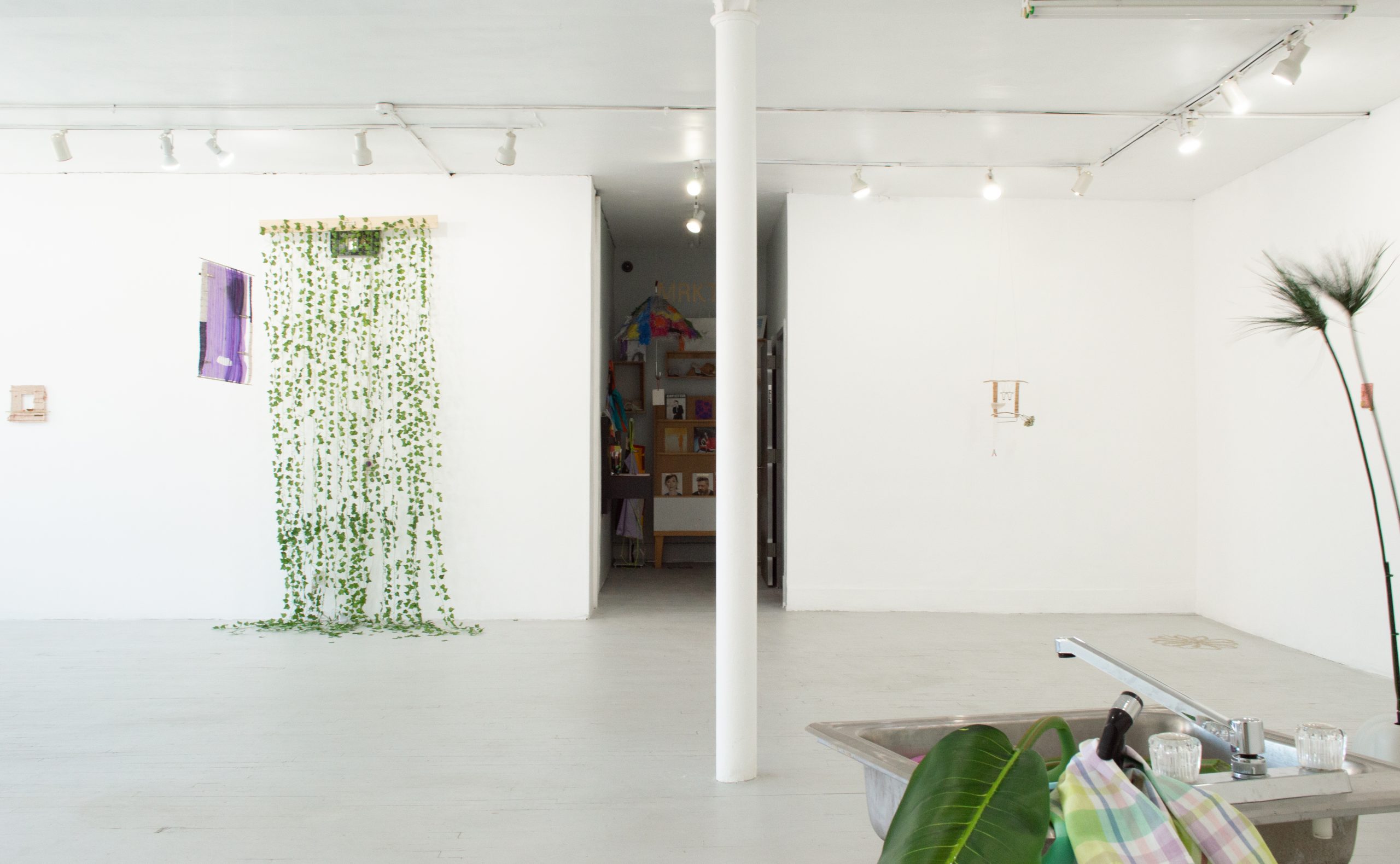 Featured image: An installation view of Water Cooler at LVL3. On the left side of the frame is Rachel Youn’s piece “Lair”, and not he right are various textile pieces by KG with Youn’s piece “Prune” in the foreground. Image courtesy of LVL3.

If you want to know the deepest, most personal information about someone, ask their coworkers first. Being confined to a small space with an island of misfits for grossly extended periods of time leads to intensely intimate conversations, bonds, and pseudo-friendships. Leading to uncomfortable chatter about your credit card debt with Phil from the department down the hall while you wait for your turn to use the microwave on your break, or confessing details about your partner’s bad habits with the hostess while you kill time between customers. Both learning and spilling graphic details from and to our coworkers aids in our survival of the work day. Both intensely awkward and oddly comforting, we create an environment of forced intimacy. Sterile, uncomfortable, familiar–this described environment is appreciated, mocked, and replicated precisely in the exhibition Water Cooler, featuring the work of KG and Rachel Youn, on view at LVL3.

Upon entering the gallery, the eyes are drawn to a dominating sculpture hanging against the wall by Rachel Youn titled Lair. Long vines of artificial ivy are suspended from massagers attached to wood. Every couple of seconds, the massagers start up and subsequently cause the ivy to rustle and swing from side to side. There is a pleasantness to the plants swaying gently, giving a sense of life and growth. But that is quickly undercut by the oddness of the hum of the massagers. How strange to place these organic forms under such mechanical control–but, is it really that strange? Humans use technology to replicate intimacy in a multitude of ways: FaceTiming your family while you eat dinner to mimic a dinner party, heated blankets provide comforting cuddles, relying on vibrators rather than other people for pleasure. The list of examples where machines replace a missing piece of intimacy in our day to day lives is lofty. Lair pairs the organic imagery of the cascading ivy with the rigid rhythm of the massager stimulating the movement. The movement is reminiscent of how leaves actually rustle and sway in nature, but here in the gallery, there is an added element of subtle fiction that leaves the viewer feeling uncomfortable, but unsure as to exactly the reason.

Youn builds upon this absurd combination of nature and man-made objects that was introduced in Lair with their piece Vicious Glue. Made from artificial nepenthes, a decoy motor, a microphone stand, and silicone, the sculpture stands at around four and a half feet.. The plant is attached to the top of a microphone stand, serving as the face of the figure, while silicone spurts out steadily at the viewer. The phallic shape of the plant and  dripping silicone jutting from the tip combined with the steady vibration from the motor causes the piece to ooze with eroticism. Immediately, I feel I should look away, as if I am accidentally witnessing someone else’s intimate moment. This sculpture is the person from the office that makes too many sexual innuendos, causing everyone else to feel on edge, yet strangely curious to hear what they will say next.

Youn’s ability to capture developed characters with distinguished personalities through the use of discarded objects is astounding. Moving over to their piece, Temptress, a new figure is introduced. Made from artificial papyrus and a massager, the sculpture stands at a whopping nearly seven feet tall. The massager serves as the base while two fake trees ferociously jolt back and forth. The leaves rustle and woosh from the movement, and the viewer is stuck with eyes glued to the ends of the plant, moving back and forth dizzyingly. This is the coworker who decided it was their duty to be the life of the party, the one you wish would stop talking and stay still for once–but the minute they do, you realize you miss the noise.

Floating in the near center of the gallery is a textile piece by KG titled I Got a Haircut!. A few inches larger than a sheet of paper and suspended by a single thread from the ceiling, this primarily purple textile piece slowly turns in response to the subtle wind caused by the moving bodies of the viewers. Looking at the piece, there is a clear face staring back at the viewer. This face is created by the detail of having a smile-shaped opening where the mouth should fall. Interacting with the piece is frustrating and rewarding: the quicker you excitedly move to look at the piece straight on, the quicker the face turns away from you in reaction to the wind you generated. I spend a couple moments perplexed by why I could not get a good view. I want to reach out and hold the bottom corners down to force it to stand still. The sheepish smile mocks the viewer as it turns its back to them. I suddenly feel embarrassed, like meeting someone new and accidentally coming on too strong. Strategically placed in the center of the room, the piece is begging viewers to look at it from every angle. The title itself, I Got a Haircut!, is an exclamation of sorts, saying “I have changed, please take notice of me.” Yet the piece becomes bashful the minute you step into near proximity of it. The positioning of this piece is as important as the weaving itself. Placing this textile against a wall would have caused it to fall flat, but the suspended element animates the piece, as it becomes this complicated, awkward, alluring character that we are forced to interact with.

Due to their history of functionality and being seen traditionally as a woman’s craft, textiles themselves introduce the long-held viewpoint of craft being considered less sophisticated than “fine art” on their own. KG’s complex textile pieces are no exception. KG brings this conversation of craft into play, and then sucker punches it in the face with Cleanup Time. In this piece, a weaving of brown and black fibers stripe one another, and two powdered sugar donuts hang from pieces of twine at the top. Constructed to roughly the size of a pot holder, I am transported into a kitchen, where I’m reminded of other “frivolous” tasks, such as cooking, baking, and cleaning. Cleanup Time challenges the opinion of craft being trivial by placing this object, traditionally used to protect counters from hot pans, into a new context. The new context includes the classic white cube of the gallery space, installing it precisely on the wall, and surrounding it with other extremely thoughtful pieces of art. This idea is further punctuated by adding the powdered sugar donuts. Formally, this addition makes for a visually-sound final piece: brilliant white soft circles stand smartly against the meticulously woven neutral textile. Conceptually, it reads like a perfectly timed punch line. Whether this happened or not doesn’t matter, I can picture KG working on this piece while enjoying a midmorning snack, and adding this snack to the piece in a moment of tongue in cheek spontaneity.

The piece that requires the most time and consideration is Youn’s piece, Prune. Made from an artificial leaf, pump, sink, dishes, dish cloth, and concrete, the piece stands around the height of a traditional kitchen sink. The sink is filled haphazardly with a pile of dishes, replicating a mundane and familiar snapshot of day to day life. However, a wrench is thrown into the piece with the addition of the artificial leaf. Water cascades down the tubing of the stem, exits from the plant tip and into a bowl, perfectly filling the bowl to the brim. This causes the ordinary scene to become immediately unsettling, yet oddly satisfying. No room for even an additional drop is left in the bowl; the water pools up completely level with the brim. Similar to the rest of Youn’s sculptures in the exhibition, each element that makes up this piece is recognizable and familiar on its own. Youn subtly recontextualizes these familiar items by combining replicated organic matter, the snaking stem from the leaf, with dilapidated machinery–in this case, the sink. Youn gives these discarded objects an untraditional second life. They result in sculptures that are nearly functional, almost recognizable, and close to useful forms. Nearly, almost, and close are the operative words here. The results are reminiscent of having a vision for life, and working towards a goal, achieving it, and realizing it wasn’t at all what you had pictured in your mind. The sculptures have an unsettling nature to them because they reflect the viewers’ shortcomings. Youn’s thoughtful use of objects and precise attention to form left me feeling unsettled, uncomfortable, and profoundly reflective of my own aspirations versus reality.

Between KG’s expressive textiles and Youn’s gestural sculptures, the atmosphere in the gallery feels simultaneously energized by the amount of figures present, yet depleted by the awkward tension between each of them and the viewer. I want to stay for a couple more minutes, because I can’t take my attention away from the strong work that is present. I also want to leave, to remove myself from the uncomfortable nature of the created environment. While I decide to make another round or head for the door, this extreme tension is perfectly comparable to a lunch break: not wanting the time to go fast, because that means it’s time to get back to work, but wanting the time to go fast, because then there is less time left in the work day.