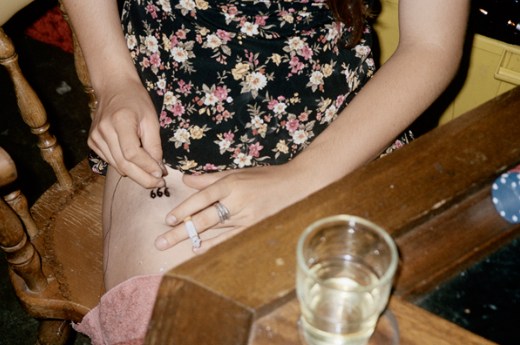 Forward motion is ineluctable. It is something that most of us accept as a part of life. Art-minded individuals tend to be particularly sensitive to this intrinsic vanward impulse, which makes the occasional chance to stop and reflect something to be appreciated. Almost two years after our initial interview about the series Talking With Fear About Dying Tomorrow, Matt Austin and I once again found ourselves in conversation about the photographic fragments of his travels several summers ago. Only this time around a selection of photos have been pulled from the series and placed within the context of  Everyday Always Trying, the inaugural exhibition of The Coat Check at David Weinberg Photography. Revisiting the past isn’t always easy or even desired, but we tried it anyway–perhaps channeling the ideas at the heart of the exhibition. Over drinks on a  warm fall evening, I got the opportunity to ask Matt about the different definitions of impulsive, the value in our attempts and who to call if you’re looking for a good time in Fargo.

Tempestt Hazel: Do you consider yourself impulsive as a photographer?

Matt Austin: In Talking With Fear About Dying Tomorrow, the work is a consequence of what [my traveling experience was]. It was a trip taken with a couple of cameras, so yea. The majority of those photographs are snapshots taken on the way to something else. Super fleeting moments, not staged. Then it makes me think of nailing down the definition of what impulsive means. Impulse, when you generally think about it, makes you think of what your first immediate reaction to something is. Immediate is a word that is associated with it.

TH: Right. But when I’ve looked at some of your photographs I’ve thought of them as a bit more than that. I’ve imagined that before making them you were somewhere for a certain amount of time and making the photo worked its way into your consciousness rather than just happening as you’re walking by.

MA: That makes me think about how else you can look at the word impulsive. We have impulses and they don’t necessarily get confronted immediately. Like the photographs I’m making now. They feel like impulses–ideas that don’t necessarily make sense right away, but I follow the instinct to make them.

TH: It’s been almost two years since we last spoke about Talking With Fear. At that time you mentioned that you would have the show at Johalla Projects, then it would be over and you would be on to the next thing. How does it feel after all this time to go back to that series?

MA: I guess the way I look at it is that I’m not going back to the series. It’s more like reframing part of the series into a newer idea. There are too many things that are so much fresher in my mind. Certainly, ideas that I’ve had for projects since then totally integrate ideas. But the work itself, I’m not sure I’d be totally psyched on thinking about it. What I do like about this show is that I can look at those pictures in new ways. I can look at them in terms of this new space–it’s a new generation and a style of photography that isn’t usually represented anywhere in that neighborhood. Also, the work is next to a few other very interesting artists. [Until now], this work has only been shown in solo shows–at Johalla then at Notre Dame.

TH: Have you had the chance to think about how the photos in the show work outside of the framework of the entire body of work in Talking With Fear? And how do you think that changes how they are understood?

MA: The works that have been selected all involve photographs of text. I like thinking of the title when looking at those four photos because that’s how I feel about those moments. There is an attempt being made to communicate in a really complicated way. There’s the intended message of each of those gestures that are happening–like choosing to have a tattoo that says “666” and what it means to try and say this to somebody else, while also having that message for yourself. I like the combination of the four, and I like them individually when thinking about trying or attempting [something] because that’s the important part. Rather than the succeeding, it’s the trying.

TH: Why don’t you think the success of delivering the message is as important?

MA: I guess it’s because who’s to say whether or not the message was successful? I think about that all the time when I see things in bathroom stalls or things etched out. I think, “What’s the goal here? What are they trying to accomplish?” And maybe it’s just to ruffle some feathers or cure some boredom–I don’t really know. What ends up carrying through is the fact that they tried to communicate something. And that’s identifiable. Like in the other piece that’s in the show–the [photo of a] paper towel dispenser in a laundromat bathroom in Fargo that was covered in etchings. Every single etching on the dispenser was about this girl named Kristy–all different sorts of super vulgar, super gross things are said but also super nice things. Like, “Call Kristy for a nice time…”

…an attempt was being made, though we don’t know by whom. But etching takes effort and to cover every square inch of the dispenser is also going to take some effort. Then, on top of that, to all describe one person–a lot of consideration was taken into this one piece–all for Kristy.

TH: Do you adapt the same philosophy to your photography in the way that you’re communicating a message and it doesn’t always matter the success of communicating the message, it just matters that you’re attempting to do so?

MA: Partially, yes. That may be something to feel bad about. I think you’re right, but I don’t know if I’m supposed to agree with that. It’s one of those things where I feel like I’m supposed to say, “No, I’m actually really clear when I talk or [make my photographs].” But I agree with you. I think it’s because of the way I treat all of the projects I do. Get what I need to out and move on to the next thing. I’ve been thinking about this a lot lately. There’s some string in how I work that is perfectionism, but it’s not the normal kind. The normal kind is like when you produce a print and say, “This has to be perfect…” or the edge of this book cover needs to be glued down and we need to redo that. Those aren’t the things I spend the most time on. I consider my printing a lot, but I also leave room for the fact that very few people will care if it’s off one point yellow or two points green.

MA: Maybe continuing ideas and moving forward. Rather than creating a project, then dwelling on it for however many years, I think something else needs to be in the works. Maybe it’s not perfectionism. Maybe it’s an incredibly willed attempt at determination or dedication to the fact that I don’t want to represent the concept that I’m not changing all the time. So, for me to make the same art over and over again, that doesn’t make sense. I’m not thinking the same way all the time, so why would I make the same art all the time? Maybe perfectionism isn’t the right word. It’s a kind of handshake with myself to just be true to the fact of what’s going on rather than pretending.

TH: When you were making Talking With Fear, specifically the photos in the show, what made you stop at these particular moments and take them? Can you identify what it was about a certain object or word that stands out to you?

MA: In retrospect, I think there was this unspoken thought in my head about the fact that I was driving across the country by myself. When you don’t have someone else to share that with, it’s kind of weird in the fact that you literally can leave no trace at all. No one knows what you’re doing or where you’re going. I would see these moments of people attempting to make a trace of where they’ve been and I would connect with those without thinking much about it. At the beginning of the trip it was more of [stumbling] upon them. But as I continued on, I came across a bunch of these and that’s when I started paying attention to them. Like the picture of Meg’s leg happened in Portland and I had been on the road for a while at that point. So, when this moment happened, I was connected to it.

TH: It seems like the work that you do can be seen as the residue of you living life and you just happen to have a camera on you as well.

MA: Nowadays, I often don’t have a camera on me aside from my phone. Maybe two years ago EJ [Hill] gave me a tiny elf camera–fits in your pocket, super low maintenance. I would photograph with it non-stop.

TH: Are you accustomed to taking photos at such high volume?

MA: I started photographing non-stop with EJ’s camera because it was so easy to carry around. Maybe it does something psychologically. I feel like I make the most photos when I’m teaching and my students will do something cool. Or I’ll be in the mindset of teaching so I’ll start seeing things that I normally wouldn’t. I make tons of photos in the hallways of places that I teach. Two of those photographs are in Matt [Avignone]’s show. They happened two days before the trip.

TH: Why did you decide to include them in Talking With Fear?

MA: Because I really like them. The Kindns photo is one of the best things that has ever happened to me. Seeing that in the hallway has affected the way I think about any art or any communication attempt. That’s changed my understanding of it profoundly. The fact that the sentence is hugely misspelled and it’s signed like an artist would sign a painting makes it so much better. It is powerful because of its imperfections because if it weren’t, it would fall into that place in our minds that allows for disregard. If you were to see next to that a sentence on the wall with purple background in gold gradient text that said “Life is a journey, not a destination…” it would fall into that part of our brain where you totally just miss it because it’s someone trying to paint something for you. But “Kindns is being nice to other pepul” is much more powerful. Again, it’s an attempt that’s being made. And the attempt, with its spelling and handwriting, is far more important than it being perfectly done.

Discover more of Matt Austin’s work by visiting his website at mattaustinphoto.com. You can also see his work in Everyday Always Trying, the first exhibition in The Coat Check project space within David Weinberg Photography on November 2, 5pm – 8pm. The exhibition runs through January 5, 2013. For more information, visit d-weinberg.com.

Read the 2011 interview Talking With Fear About Dying Tomorrow: A Conversation with Matt Austin here.