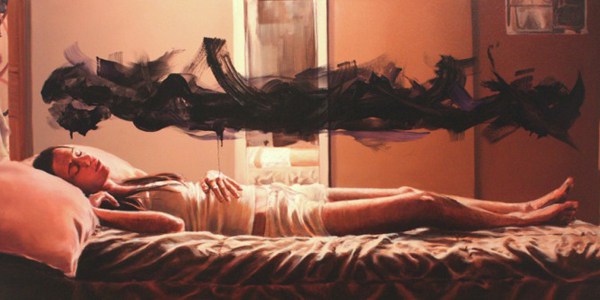 According to the artist Jennifer Cronin, every great painting contains “something that cannot be seen.” An allusion to something below the surface of the canvas, perhaps, or something beyond the edge of the frame.

Cronin believes that even the banality of everyday life ought to be interesting, and she has made a name for herself painting surreal self portraits that seem to evoke the mystery of the mundane.

Her work has been shown throughout the United States, but she is perhaps best known in Chicago, where she has lived and worked for most of her life. Cronin grew up in the suburbs surrounding the city, and she describes her upbringing as a frequent source of inspiration and frustration in her work.

“I am certainly not alone in my upbringing as a suburban female,” she acknowledges. “Yet that aspect of my identity has remained one of the most salient and inescapable to me throughout my life.” Cronin also notes that many of her early paintings depict images of young, suburban women struggling to break free of their stifling surroundings.

Some of these early painting were included in her solo exhibition, Wandering Around in a Small Space, which opened at the Elephant Room Gallery last Friday. Others can be found at the Zhou B. Art Center’s 7th Annual Self-Portrait Exhibition. which will be on display until August 13th.

Anyone interested in seeing more of Cronin’s work ought to check out either or both of these exhibitions.