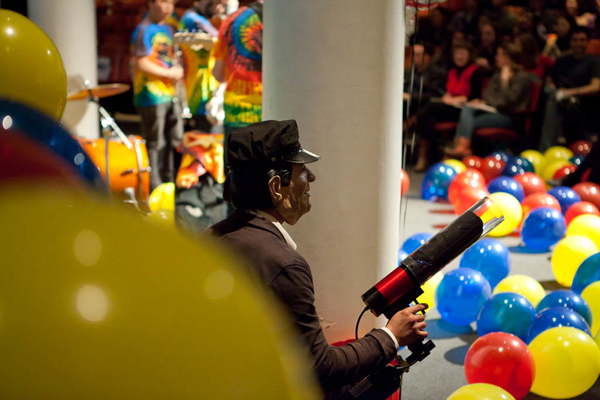 While perusing the pages of the Chicago Artists Resource on a lazy Sunday morning last week, I stumbled across a notice announcing a Teach 4 Amerika rally, to be held by the Bruce High Quality Foundation (BHQF). I had never heard of the rally or the organization before, and I wasn’t really sure why a man named Bruce High Quality would want to host a rally for American teachers (or the creative misspelling of the English language), but my interest was piqued, and I began to do a little digging.

I found a brief explanation of the rally on the Teach 4 Amerika website: “Teach 4 Amerika is a five-week, 11-city, coast-to-coast road trip that crosses state lines and institutional boundaries to inspire and enable local art students to define the future of their own educational experience. Traveling the byways of America in a limousine painted as a school bus, BHQF will bring together concerned educators, artists, arts administrators, and—most importantly—students to brainstorm on the future of art schools.”

I turned my attention next to that great fount of knowledge and wisdom: Wikipedia. According to the organization’s surprisingly well-referenced Wiki page, the BHQF is an arts collective based in Brooklyn, New York, it was “created to foster an alternative to everything,” and the illustrious Bruce High Quality is—or was—a fictional artist who met a fictional demise during the 9/11 tragedy.

So, all of that made plenty of sense.

I was somehow even less sure of what a Teach 4 Amerika rally might entail than I was before, but I definitely wanted to learn more about how to “impregnate the institutions of art with the joy of man’s desiring,” and I was genuinely interested in learning more about the current state of arts education in America. Besides, I’ve always had a soft spot for postmodern art collectives—the sillier, the better!—and I assumed that, even if the rally wasn’t informative, the BHQF members putting it on would at least be entertaining.

And so, on the evening of Thursday, April 7th— when the BHQF decided to host a rally at the University of Illinois at Chicago (UIC)—I threw a pen and a pad of paper into my purse and made my way to the UIC campus.

I arrived just as the rally was beginning. Almost every chair in the auditorium was already occupied. At least a hundred students, educators, and artists had turned out to hear from BHQF and voice their own opinions about the future of arts education in this country—way more than I’d expected.

Sinking into an available seat, I watched as an anonymous member of BHQF (who I will refer to henceforth as “Bruce”) made his way to a podium in the center of the auditorium. Bruce picked up a microphone and softly cleared his throat. A hush fell over the crowd. The lights around us dimmed, and a screen behind the podium glowed a bluish-white. Then Bruce began to speak.

“Why does our society choose to produce artists?” he asked us. “And why do we think that our current method of education is the best way to do that?”

Immediately, I knew that this speech would be far more serious than silly, and that the BHQF—for all its posturing and pretensions—was genuinely committed to changing the way people talk about arts education. Pulling pen and paper out of my purse, I got ready to take notes.

Bruce then began to relate to those assembled in the auditorium the history of arts education in America. “In the 1970s,” he explained, “There were 72 accredited art programs in existence in this country. Today, there are more than 900 similarly accredited programs.”

In spite of my complete lack of mathematical ability, I have always been fascinated by statistics and percentages, and I reached for a mini-calculator I carry with me everywhere (for no explicable reason). If Bruce’s numbers were correct—and I had no reason to doubt that they were—they represented a 1150% increase in accredited art programs. A 1150% increase in accredited art programs within the last forty years.

This begged an uncomfortable question: Has the market for art in this country really increased by 1150% in the last four decades? Are we really buying so many more paintings, sculptures, drawings, and prints? Are we attending art museums so much more often than we used to? Are we buying so many more works of art criticism and art theory from our bookstores?

The answer to all of these questions is, of course, no. There has been almost no significant increase in the demand for art, or in the demand for art museums and books about art. There has only been an increase in the number of artists our country has produced, in the number of institution-educated artists our country has produced.

After a moment of contemplative silence, Bruce continued to speak. “The purpose of the art academy is the construction of a peripheral industry around art.” Young people, he claimed, rarely go to art schools to become successful artists. And they don’t go to art schools to become better people. They go to these schools to find jobs as professors of art history, administrators in art museums, and PR experts at auction houses. Art majors go to school, he said, for the same reason that business majors go to school: to get a good job. “But we’re giving up on the idea that artists stand apart from the status quo if we treat an art education like a business education.”

“If every museum, school, and art institute were shut down tomorrow, would you still make art?” Bruce asked. I could see a group of young people in front of me nodding vigorously, and a low murmur of affirmation ran through the crowd.

And that, I suppose, is what Bruce was getting at all along. He wanted us to realize that people don’t—or, at least, people shouldn’t—feel compelled to make art for money or fame. They should make it for their own personal betterment. And they should make it because art is perhaps one of the truest, purest forms of self expression in existence. Or, to quote Bruce once again, “Being a real artist means taking a risk of being alive.”

I certainly agreed with Bruce, and I could see that the men and women around me agreed with him too, but I was still unsure exactly how the BHQF intended to organize artists outside of a traditional education system.

And so, after returning from the rally, I contacted the Teach 4 Amerika organizers and asked them to provide me with a short statement about their time on the road and their understanding of Teach 4 Amerika. They kindly provided me with this statement:

“It is becoming increasingly commonplace to think of the BFA/MFA system as the proper course of an artist’s education. The academic system is becoming naturalized. This can’t be a good thing. Not only is it an exceedingly expensive way to approach being an artist, it’s also fraught with the political baggage of the American educational system.

“We’d like to promote an alternative idea—that an artist’s education is a more diverse beast than the academic system lets on. In addition to the ‘school of life’ model of learning, there are ways artists can organize educational circumstances for themselves outside of the professionalizing methodology of academia.

“Our own project, BHQFU, is one possibility, but there are thousands of others. Teach 4 Amerika is, on the one hand, intended to encourage more artists to take their educations into their own hands and out of the academy, and on the other it is a field trip for us to learn about different ways artists are already organizing themselves.”

And with that, my questions—for the most part—were answered. I went to bed that night wishing that the BHQFU would  establish another branch of its “university” in Chicago, and I made a mental note to check up on the BHQF from time to time.