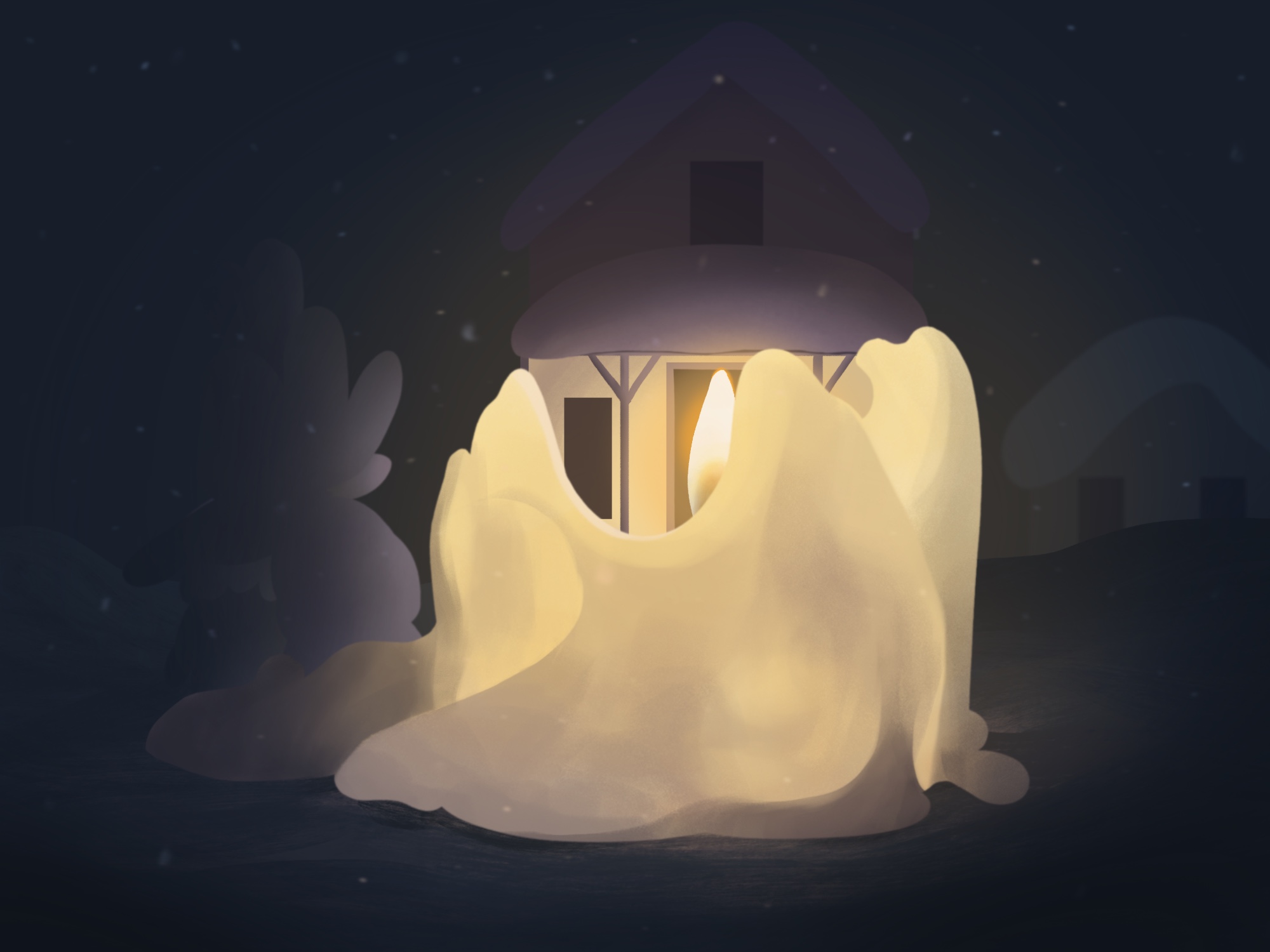 After taking the longest, hottest shower, the cold air beyond the curtain grabbed at my skin like frigid hands ripping me from the arms of a warm lover. That was the morning that Jeremy died. It felt like the end was near the night before. He asked me to put his rocking chair on the enclosed front porch even though it was the dead of winter, and freezing. A snowstorm had blanketed the lawns, trees, hedges, and rooftops, creating a picturesque scene that covered the bloodstained streets, grass depraved lawns, dying trees, and crooked hedges the summer left behind in our South Side neighborhood. The storm drowned out the sounds of every block.

We sat in silence for a moment, wrapped in layers of African mud cloth and every blanket we could find, taking in deep breaths of crisp, cold air, relieving our lungs of the sickroom smell we inhaled daily.

“Remember when?” Jeremy said as he lit up a joint.

I immediately began to laugh because he was so funny.

“Remember when we first moved in together, we had an argument and I slept out here all night in the freezing cold because I thought you would have sympathy and come out to get me”?

“And you never came.”

I immediately followed up with, “Remember when we got into that fight with the neighbor, and he called us faggots, and someone burned a bible on our lawn?”

“And that was a nice bible too!” Laughing hysterically, we continued to puff on his pain medicine and swirl into a night of boondoggle.

I suddenly felt the urge to cook.

“What do you want to eat?” I asked, half chuckling and half choking on the thick smoke from the joint.

“I don’t know… anything… I can eat anything,” he laughed.

“Well, chicken, mashed potatoes, cornbread, and gravy it is!” I shouted.

I shot up from my rocking chair, stripped off the mud cloths and blankets, and sprinted to the kitchen.

I opened a bottle of expensive cognac that I had been saving for a special occasion. I turned on some soul music. Pots and pans clanging, and me singing to Phyllis Hyman’s song “Old Friend”, forgetting for a while that a once 245-pound gym rat was sitting on a cold porch, 125 pounds lighter, wearing a diaper, too weak to walk alone, and one month away from his three-month life expectancy… was I supposed to be happy?

I turned the music to a low level so that I could hear him in case he called. I could hear him talking to himself, as he often did when he took his morphine… and sometimes when he didn’t. It seemed as if he was talking with others this time, strange, but nothing alarming if you ever lived with a terminally ill cancer patient. Sometimes they are with us, and sometimes they are somewhere else, and we have to meet them there.

“Thugs don’t get cancer!” I heard him shout.

Taking a break from my duties, but still maintaining ‘happy’, I shouted, “You have a Master’s degree, one pair of Jordans, two baseball caps, and no ass or reason to sag your pants… you are far from a thug!”

More laughs ensued as I made him a drink of cognac and orange juice. I never made him a drink since he was diagnosed a year prior, but it seemed as if the night was on auto-pilot and I had no judgment. I got dressed and sat back down to join him on the porch. He was still talking to himself, or to someone else. It was so strange. His eyes were fixed on something, or someone, and all I could do was watch, amazed at how intricate and detailed the conversation was that he was having. After a couple of minutes, I touched his hand, and he looked at me as if I startled him.

“The food will be ready in about a half hour, okay babe?”

“Chicken, cornbread, mashed potatoes, and gravy… Can’t you smell it?”

Bewildered, I got up slowly… it was like he saw something that I could not see, and his bloodshot eyes welled with tears. “It’s okay, baby,” he whispered. “We talked, he seems like a nice guy and he knows how to cook too.”

I began to shake, thinking to myself this could not be happening. I had to go and stir the gravy. I slowly took the drink from his hand and went into the kitchen, turned the music up and began to cry.

“Half an hour!” I screamed. “Half a fucking hour, and he’s leaving me? … I know he is! I just wanted to cook, and have a nice meal! I turn my back, and a half an hour later you are taking him… Why? Damn you!”

I threw the drink in the sink, shattering the glass and cursing God. Stirring the gravy uncontrollably, I grabbed the bare metal handle of the pot and burned my hand… shouting and crying I went to the floor.

Sitting in a puddle of tears and gravy I looked up, and there was Jeremy in the doorway to the kitchen, holding on to the wall crying.

“I am so sorry baby,” I said as I scrambled up from the floor trying to clean up and cover up the mess but, slipping a bit on the spilled gravy.

I ran over to help him; he looked me deep in my eyes, his eyes dark, and he softly spoke.

“You are crying. I am so sorry that I hurt you … What’s your name?”

God-smacked, I looked at Jeremy, his eyes began to glaze over, and I grabbed him by the arms, walked him to the living room and sat him down on the sofa.

He continued to look at me and slowly began to slump over on the sofa.

I could smell the gravy and the chicken burning, but I could not tear myself away from him.

“Jeremy, the food is ready!”

I got up and ran to the kitchen, grabbing two plates and rushing them to the table,I looked over to Jeremy, and he was leaning to one side, his eyes slowly wandering. I ran to the sofa, propping him up and trying to remain calm as I spoke.

“I am setting the table so we can eat, okay?”

He gave me a smile and faintly whispered.

I got the humor in it, even through his slow and tortured voice. I jumped up and ran back to the kitchen. The gravy was totally destroyed, the chicken was burned on the bottom, the cornbread wasn’t cooked and the potatoes were not peeled. I ran two glasses and silverware settings out to the dining room, and quickly went back into the kitchen, afraid of what I would see if I looked at Jeremy. I mashed the potatoes with the skin on (he hates them with the skin on but there was no time), ran two candles to the table, and ran back into the kitchen, then ran back out with the chicken and potatoes. Jeremy had fallen from the sofa and was lying on the floor… with tears streaming from my eyes, and down my face, I lifted him off the floor and took him to the table.

It took the paramedics about an hour to get through the snow-covered streets, but I really didn’t mind. I had laid Jeremy softly on the sofa; his delicate frame caused no struggle. I wrapped him in the African mud cloths and put a red pillow cushion from the sofa under his head. He looked like a sleeping king.

The ambulance arrived with its sirens off, silently lighting up the street in red. I really could not remember what the paramedics looked like, or what they said to me, or what I said to them. It all seemed a muffled blur. I sat at the table watching the candles burn as they prepped Jeremy’s body. Another Hyman classic was playing; it was “Meet Me on the Moon.” She was one of our favorite artists, and the song played as they rolled Jeremy past me and out of the house.

The sun rose over our South Side neighborhood in a clear blue winter sky that morning with the sunlight bouncing off of the snow hills. There was a single pair of tire tracks not completely covered by the snow leading from our driveway.

Our place settings were still on the table, with a lone candle still burning, its flame just barely holding on, as if begging me to blow it out and end its suffering. The food was cold and uninviting now, I rose from the table and blew out the candle.

Featured Image: An illustration of a house on a dark Chicago block in the dead of winter. Snow lies all around, piled high on the roof and the awning over the porch. The lights in the house are dark, but a burning candle in the foreground seems to emerge directly from the snow, its flame aligning with the darkened door of the house. Original art by Kiki Dupont.

EdVetté Wilson Jones, hailed from Chicago’s Cabrini Green housing projects where he was taught acting as a child by Jackie Taylor (Black Ensemble Theater) and Patrick Henry (Free Street Theater). As an actor he worked onstage and behind the scenes as a stage hand and wrote audition pieces for fellow actors. EdVetté became a part Chicago’s street culture in the 90’s traveling and performing as a storyteller, and poet while writing and reporting for Lambda Publications, Black Lines magazine. In early 2000’s he started studying photography, extensively studying the works of the human condition not specific photographers. He became a private photographer for local bands and elite clientele, and studied film and digital media at Illinois Institute of Art. EdVetté is the owner of Artistic Directions Inc. His work focuses heavily on style, politics, social consciousness, and photo-therapeutic sub-conscious photography.