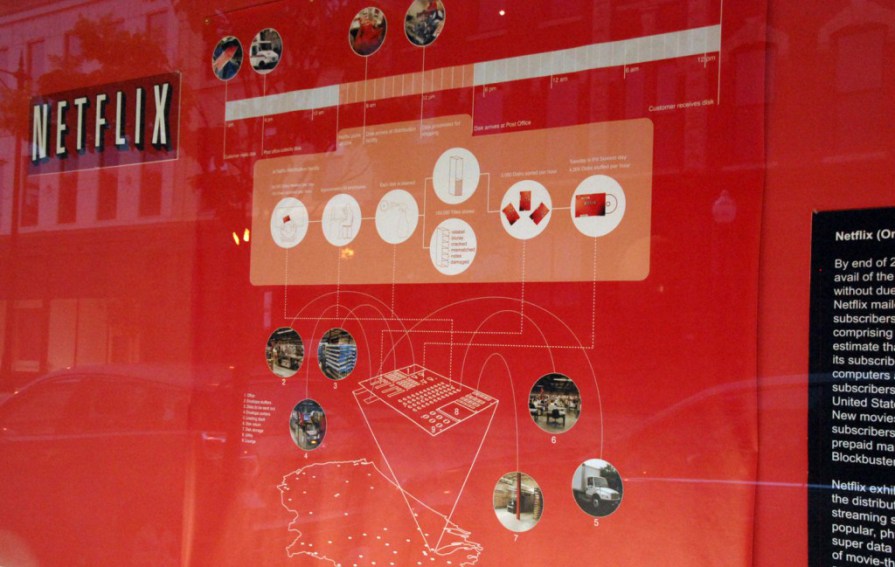 I recently had the pleasure of sitting down with Clare Lyster, an architecture professor at the University of Illinois at Chicago and principal and founder of Clare Lyster Urbanism and Architecture (CLUAA).  Her exhibition, SYSTEMscapes/Drawing Distribution Flow, is currently on view in the showPODS along the 1800 block of South Halsted in the Chicago Arts District. The exhibition displays Lyster’s large-scale maps that “draw distribution flow” of large corporations– Netflix, YouTube, Amazon, FedEx, Waste Management, and RyanAir. We talked about the role of visualization in the field of architecture, the implications of these global contemporary systems on the city, and the importance of finding design opportunities that arise from these explorations.

Jennifer Nalbantyan: How did you get into the field of architecture? Did a particular experience or person spark your interest?

Clare Lyster: There was no defining moment that made me want to be an architect other than having an interest, even in the very small, fairly remote place that I grew up. I was always interested in going around and seeing the new houses that were different from run of the mill designs. So, it was a general curiosity, and it was houses because I didn’t grow up in a very civic kind of environment; domestic architecture was really the only resource to play with and be curious about.

Also, in Ireland, you take a really big exam at the end of high school and that kind of defines what you’ll do for the rest of your life. Based on your performance on that exam, you can rank your preferred college choices. The more popular a course would be, the higher it would be ranked.  And at that time– this was in the late 80’s, so pre-Celtic Tiger – the economy was actually pretty grim in Ireland and England. So, architecture wasn’t very popular because you knew that if you studied architecture, you’d have to emigrate to get a job because there was no work in Ireland in the construction industry.

JN: What was the impetus for the SYSTEMscapes project? Was the exhibition portion an initial part of it or did that come about later?

CL: The interest in systems and networks emerged when I went to grad school and I studied with a woman named Keller Easterling at Yale, who has since then emerged in the foreground in research and analysis of globalization and networks.  A design studio and seminar opened up that territory to me and that coincided with a cultural embrace of systems and infrastructure in the city.  She wasn’t working in isolation; this was part of a much larger conversation. Then, when I came to UIC, I continued to try and find my interest in that field of study. I think I’m still trying to do that.

The work and the exhibition is a culmination of four or five years of research of trying to position myself within this greater exploration of network theories.  The work has been ongoing in my own practice and in studios and seminars here at UIC.  The exhibition part came up later and it was a good discipline for me to put the research together and frame it in a certain way.  The maps– this idea to draw contemporary logistical networks– has been something I’ve been doing for the last four or five years.

JN: Have you ever shown your work before to such a general, broad audience?

CL: Not in such a general public way. It has been exhibited and presented, but in more architectural venues.

JN: Do you see a potential benefit to having the work viewed by a wider audience?

CL: My benefit was, I think I’ve struggled with trying to frame the work, and when you exhibit the work, you have to explain it very carefully, and so that was a good challenge for me, to explain why I’m interested in these networks and what the implications of that research have for architecture.

In terms of good for the viewer or the public, I think that the maps try to explain how some of these systems work.  I don’t think that people are cognizant of what it takes for a FedEx package to arrive on their doorstep—they kind of take it for granted.  Or, they also don’t really think about, if I go on Amazon and I order a pair of shoes, how that works.  So, there is an attempt to expose how these systems work and that people might be more aware of the processes behind the things they do every day.

JN: Can you talk a little about the importance of visualization in your work? Do you consider the maps themselves a piece of visual art or do you simply see them as the best method for communicating these complex ideas?

CL: I think they’re both. The way that architects communicate is to draw. That’s our tool. We also write, but drawing is the mode of representation in the discipline. So, understanding how the act of drawing can expose these networks was also very important to me, and also what new techniques of representation are required to explain these systems. I think it’s very much integrated. The aesthetics of the maps and the clarity of the maps are integral to each other—I really can’t separate one from the other.

JN: What is the impact of these new “flow networks,” as you describe them, on the field of architecture?

CL:  That’s the big question and that’s what I’m trying to do in my work at the moment.  There are a number of implications. Thirty or forty years ago, architectural form made the city and how buildings were organized through a plan defined the urban fabric. To me, more and more, it’s the systems of the city that now define the city.

In the modern city, that would have been infrastructure, such as highways; and in the industrial city, the railroads defined the city. But now I think it’s these logistical networks that are defining the city. If we can study these networks—they’re a little more complex than just looking at a highway or an airport, and so the first stage is understanding them. That’s what the maps try to do for me.

Then, from that we can start to contemplate what their implications are, and then as designers we can also find design opportunities within these networks, which is what I’m also doing (not part of this exhibition). How do you take the logical conclusion of each of the networks and test that conclusion? In the case of FedEx, one implication might be that it accelerates our relationships. And that has certain implications for the city— we may have more free time within the city.

Or in the case of Amazon, an implication is how it empties out the city. The Borders store that closed on Michigan Avenue recently— there’s an example of a very active, public space in the city that’s now gone because I can buy the book online and have it delivered the next day. So, one might speculate that an implication of Amazon is a city without retail. How do you visualize that kind of city?

JN: On one of the diagrams, you cite that companies like YouTube and Netflix exemplify a “bottom-up system”. Now that online companies like these are so heavily invested in proprietary controls and surveillance, do you think that the corporations have, in a way, forced a reversion back to hierarchical structures? Or do you think that these horizontal networks engender the democratization of space just by virtue of more people having greater access?

CL: I think that these networks disguise themselves as bottom-up, insofar as a user you have enormous choice and access, and you have a great ability to make your own decision about what exactly you want and how you want it delivered. So on one end, yes, the user has great choice and makes decisions, but on the other hand, to make that work, I think these companies are incredibly hierarchical and incredibly top-down. And really, they can only work if they’re top-down. The fact that every package that’s delivered by FedEx plane goes through Memphis sounds crazy, but it’s the only way that they can maintain complete control, and it’s the only way they can minimize error in the system– because errors cost time. So that’s an example of how global shipping systems are top-down.

Amazon is top-down but in a very different way. Amazon just has incredible access to information—so yes, Amazon knows your profile based on what you’ve shopped for in your history and they use that information to curate pick lists. In fact, when they expanded in the early 2000’s, all of the companies that they purchased were information and software companies. It’s only more recently that they’ve started to buy actual retail companies, but up until then it was just buying information basically.

JN: What do you hope will come out of SYSTEMscapes? Do you plan on any follow-up research for this project?

CL: For the moment, I’m writing about the maps, so that’s how the work is evolving and I’m also in the midst of producing a series of design proposals that take the information and the maps to their logical conclusions. The thought is that these concepts and the design projects would come together as a book about the implications of logistical networks on architecture and urbanism.

JN: What are your thoughts about buzz surrounding the crusade Daley started when he was in office to make Chicago the “greenest city?” You mentioned when we were speaking earlier that a lot of the efforts towards “greening” the city have been superficial– such as emphasis on things like LEED certified buildings, tokens that don’t really get at the long-term problems we face. What would you recommend the city do to improve upon its green design?

CL: Not to say that having a LEED certification is not important— and I think other cities are struggling with this, it’s not just Chicago— but I think that you could have every building in the city with gold or platinum certification and you’re still going to have problems in the city. It kind of goes back to what I was saying in the beginning, that maybe we need to shift focus away from building and more onto systems, because they have much greater resonance in how the city works. I think looking at how you could make systems greener is one approach.

The other thing is rethinking how we live in the city at a much more profound level— understanding how we consume energy and coming up with design solutions. There’s a way to approach a green city that we’re not doing at the moment. I think that’s because there’s no funding set aside for design research and that’s a big problem. For some reason cities or regions are reluctant to invest in design as a mechanism to alleviate some of these issues.

For example, MOMA has just issued a research initiative and invited some architectural firms to look at the implications of the housing crisis. There’s an example of taking an economic issue and looking at it from the perspective of design, not just looking at it from the perspective of economics or politics or through investment banking and so on. I think we need more of that.

This interview has been edited for clarity and length. There will be a second opening of SYSTEMscapes on Friday, July 8 from 6-10 pm during Second Friday.  The exhibition will run through July 31st.  To see more about Clare Lyster’s projects and research online, please visit http://www.cluaa.com/.