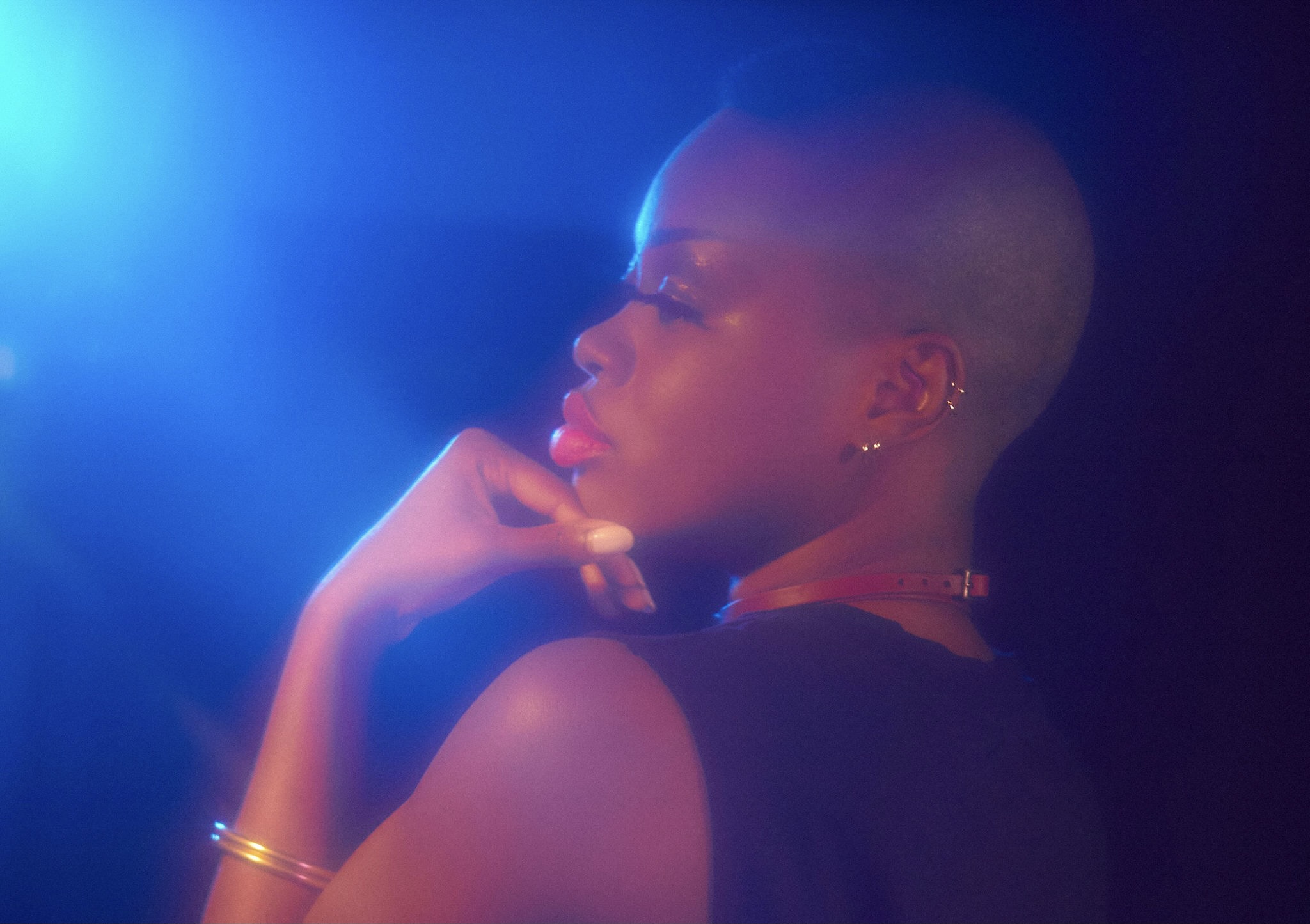 Featured image: Portrait of Kocomeow for Emma Alamo, 05/22/2021. A photograph of a person wearing brown leather straps and a black outfit. The person is posing with a hand under their chin and looking to the left. Blue light comes from the top left corner. Photo by Sarah Joyce.

Snapshot is a Sixty column that takes a quick look at art history as it happens in Chicago. We send artists and organizers short and sweet questions to tell us about what they are doing right at this moment. For this feature, we sent a few questions to photographer Sarah Joyce, who has been documenting the cultures, subcultures, and countercultures of Chicago for the last 10 years as a co-founder of GlitterGuts. In this interview, Joyce discusses her influences, balancing her personal practice and commissioned work, and her approach to giving portraiture the care it deserves.

Sixty Inches From Center: What kind of art do you create?

Sarah Joyce: I’m a photographer and I specialize in portraits. I make studio portraits, headshots, and other commercial or editorial portraits. I also started GlitterGuts with my business partner Eric Strom over a decade ago. Together we do event photography and have portrait booths at parties and events.

SIFC: What originally got you into photography?

SJ: When I was in school, we were mostly shooting in film. Now I am really dedicated to digital photography, so it took me a while to get here. I spent some significant time getting decent with using film, but it’s just not what I love. I majored in film and video in college and got into sound stuff, but I never really made anything good. I ended up in a photo editing job after college, right around when Eric and I started GlitterGuts. I wasn’t taking my own photos then, so I edited all of those photos and really did nothing but edit other people’s photos for years. That was kind of by chance and it grew organically into a job. I loved doing that work, and post-production is still a huge part of my process, but after a while I felt like I should make my own photos to edit! I started working on that very slowly and eventually took some photos I thought were actually good, so I kept working on that.

SIFC: What specifically draws you to portraiture?

SJ: I’m just kind of a creep and love people watching; just last week I was working on some portraits and thought, “I can’t believe I just get to stare at people’s faces and obsess over them as a JOB.” It’s really wonderful. I’m joking about being a creep, obviously, but I’ve just really always loved looking at portraits. I think it took me some time to be able to work with people in the way I need to, for portraiture, and I’m grateful that my life aligned itself in a way that made it possible. I think it’s important for people to feel seen, and I’m most happy with a picture of someone when they really look like themselves. In a bigger sense, I do think really hard about making a photo that looks wonderful for everyone I work with, because there are just so many images designed to be unrealistic and make us feel subtly bad about ourselves. I like to make pictures to counter that.

SIFC: It seems like color and atmosphere are two important elements of your aesthetic. Can you talk about the role these two elements have in your current work?

SJ: It really comes from thinking too hard about that little box of a photo; I like to think of them as closer to paintings than, “here is a documentation of what is in front of my face.” Because when I think of it like that, I feel like it’s unbearably corny to use a backdrop and make a little set. People have been doing that since photography began and in portrait painting, too. I do it, too, (it has persisted because it works!) but it’s what I’m trying to get away from. And part of it has been laziness, because I was thinking of how I could get away from stock colors of backdrop papers or how I could not have to actually build custom things for a million different shoots. I figured I could just use light instead and not have to have a lot of STUFF all over my studio. And color is just fun — I like it, it makes me happy.

SIFC: Who are some of your influences?

SJ: This is such a stressful question for me, I don’t really have an all-time list or ranking! Sitting on my coffee table right now are catalogs from some recent exhibits: Christina Quarles’ show that was just at the Museum of Contemporary Art, Chicago got me thinking about color in some new ways; the catalog from the recent Alice Neel show at the Met — I feel a little kinship to her because she painted a lot of regular neighborhood people, and artists, and radical folks. We have a pile of books at our studio, but I keep a few there specifically because I think of them as influences. Malick Sidibé has always been an influence for GlitterGuts because he has such a distinct style, had a portrait studio, and also shot a lot of nightlife. I feel like I’m really in that lineage, and an aspirational influence as one who got elevated into big-deal art. Also there’s Pierre et Gilles, who makes a whole little painterly world for portraits that are colorful and queer. I feel a little like I should have some deeper cuts, but those are the ones I think of first!

SIFC: What are you currently working on and what excites you about it?

SJ: I’m always excited in the middle of editing a portrait, so I’ve got a few! I traded portraits with another photographer recently and I’m working with some images of her sitting at a table, which is just a different arrangement that I’ve been periodically trying to force other people into for a year and she was finally the right person. So there’s a nice flat color field there — that is a little new for me. I have another photo that I think just looks really clean and sharp and the colors are wonderful. I get excited about pretty small aesthetic ideas. I think they’ll all come together in a larger way eventually. I tend to be slow about making sense of things.

SIFC: What do you find most challenging about working as an artist?

SJ: The real answer is always money, but I’m tired of talking about that after the last couple of years. I just finished up a shoot I did with someone almost a year ago. I like to be able to sit with portraits and make some emotional space between where we were in the shoot and what the photos look like on their own, and I’ll spend a lot of time in post-production fussing with colors and the look. I’m not super close to this person, but we’d keep running into each other and I’d apologize and feel so bad every time, because I think I should have had them done faster. But I had a different idea of what I wanted from the shoot than what we got. I feel like someone posing for me is in a vulnerable space and I want to give the work a lot of care. Sometimes I need to really spend a lot of time learning the language of the pictures we made. I ended up really loving what we made, but it took a long time for me to get there! That’s a long way of saying feeling responsible to other people in terms of output is something I think about a lot and it gives me some anxiety. On the other hand, I think it’s a worthy restriction to have, and has really only made my work and practice stronger, because it forces me to get things done and put the time in. I can’t just wait around until I feel like it — except in that case I just talked about!

SIFC: How do you find the balance between your personal studio practice and your commissioned work?

SJ: Oh, it’s messy. Sometimes I really only figure it out after the fact, and sometimes a project will start as one and end up as the other. I definitely privately classify them but try not to obsess over it too much. I’m honestly still figuring it out and don’t have a way to eloquently write about it, but a big part of my work comes from the people I’m making photos with. It’s absolutely a collaboration, every time. Sometimes we just aren’t working with each other in that magical way, and that’s ok. It’s still a craft and I am good at it. And once the work is done it’s part of the world and it’s for other people to classify, anyway. Being a gallery artist is clearly not my path (although wouldn’t I love to make some giant prints and make people stare at them!). I do reach out to people I want to work with, but I also feel like it’s really exciting to see who reaches out to ME, because the right people tend to find me and I feel like it’s such a gift.

SIFC: Would you call your work “local” or “hyperlocal”?

SJ: I think GlitterGuts is a very local project, and that’s cool. I think it’s really important work to make a document like we have over this time. I had a long time of not really working during the pandemic to clarify my understanding of my business and my work, and I feel like it’s very people-based. So wherever they are is kind of irrelevant. I’m ok with still calling that “local” in a metaphorical sense, because communities and people are so connected and overlap so much. In my own work, I’m actively trying to be less 100% Chicago-based and just did a little traveling/shooting trip that went really well. I’m trying to plan another one for later in the year, but I think that takes time to grow overall.

SIFC: What do you enjoy about working as an artist in Chicago?

SJ: It’s such a small town. Just the other day I worked with someone on a shoot and it turns out she’s the partner of someone I played D&D with five years ago. Our studio neighbor lived in the building with the pirate radio station Eric and I had a show on 20(!) years ago. Some days this is actually my least favorite thing, but it feels like a very defining thing, so it’s better to enjoy it.