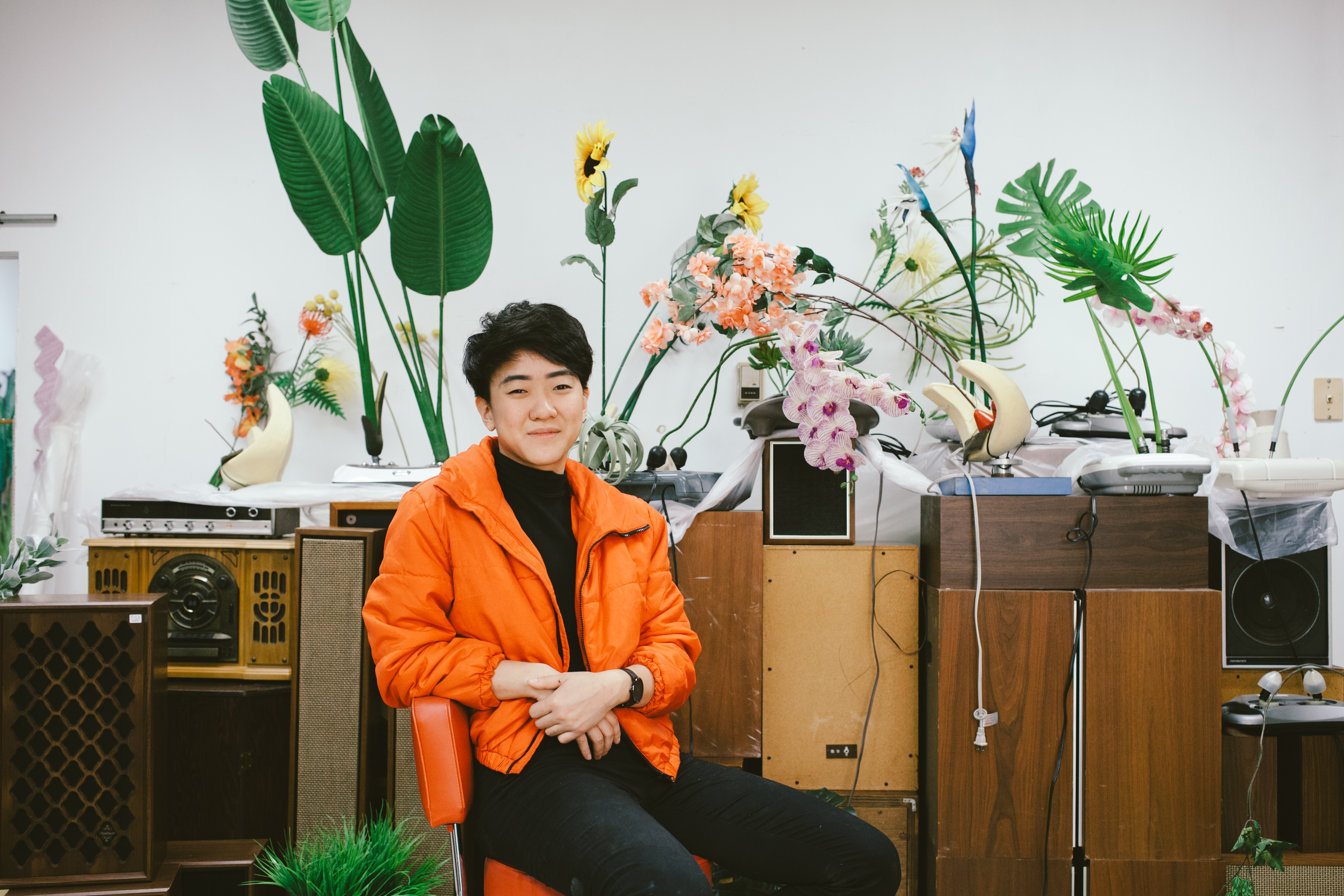 At first glance, Rachel Youn’s studio looks more like a garage sale than an atelier. Forty artificial plants cavort around the room, sprouting from machines, which, upon closer inspection, divulge their former lives as foot massagers—the kind you see on TV ads that tell you it’s time to go to bed. In this dancehall greenhouse dream, vintage speakers pose as plinths under the auspices of disco lights.

At one end of Youn’s studio jostles Adulators, a kinetic combine of a creamsicle-colored Shiatsu foot massager and two scuffling artificial olive branches. Youn does not conceal the mechanics of their sculptures: the leaves’ movements are logical, clearly stemming from the vibrating foot massager at their base. Nonetheless, the work entrances, as the two branches hypnotically wrestle on a loop; despite endless encounters, a loser is never pinned. Youn harbors the poetics of these olive branches—symbols of peace—to evoke infinite uncertainty, in which the viewer ultimately finds solace. In other works, like the motion-activated Devotee—a composite chi swing and artificial fan palm that scrubs the floor in subtle, satisfying swoops—Youn uses motion-activated sensors to commend the viewer’s presence. The titles of the works elicit reverence, which proves to be hollow; Youn connects artificial plants and electric massagers as barren yearnings for serenity, and their fusion foments tranquility in a shared futility.

At 24, Youn was the youngest artist ever selected to participate in the Great Rivers Biennial (GRB), whose next iteration will open this summer at the Contemporary Art Museum St. Louis. However, these days Youn often finds themself hanging out with a more geriatric crowd, collecting materials via Craigslist across St. Louis County for their biggest exhibition to date. In their studio at the Bermuda Project—a studio and exhibition space in Ferguson, MO—I recently spoke with Youn about material acquisition and meaning (from clutter to kitsch), comfort objects, and the commonalities between mosh pits and Korean church services.

Jack Radley: What has participating in the GRB meant for your practice and how have you been preparing for the exhibition?

Rachel Youn: The greatest thing about receiving the GRB is giving myself time and space to develop a single body of work. Up to this point, I had been making works or shows in a total flurry, sometimes cranking five–six pieces out in a three week period. This show has allowed me the time to be fully present in my studio and pay attention to what the work needs, which feels like such a luxury. The first few months of working were the hardest—I had some image in my head of what the show would look like based on my proposal, but I felt super unhappy working towards fulfilling something that was already “done” in my mind. By just being with the works and letting the motors run, I could comfortably make big decisions, like deciding to have music and turning all the overhead lights off and making it a big dance party. I never thought I’d end up here when I started!

JR:  Let’s talk about your studio, located at the Bermuda Project. How does its physical space—or organizational affiliation— influence your practice?

RY:  Space is crucial! I’ve been blessed with having a studio attached to a huge gallery space. The studio itself is the lab where I make my work. When I finish a massager piece, I pick it up and set it in the gallery and let it run. If it starts behaving weirdly, I run it back to my studio and work on it. I call my studio “the plant hospital.” Having the gallery space so close allows me to see my works in relation to each other and to the space around them. I can stage them and run crazy disco lights and see how the whole exhibition will come together at a larger scale, which has been essential for making this museum show. I am very lucky.

JR:  I can’t help but notice the endless amount of foot massagers and speakers around your studio.  How do you get a hold of them?

RY:  I spend a lot of time browsing Facebook Marketplace and Craigslist, and I’ll message ten people at a time. My search radius is set to 30 miles, so I map out everyone’s addresses on a route and spend my evenings and weekends driving out to the furthest reaches of St. Louis. My practice has oddly become half working in my studio and half driving.

My interactions with these sellers have been so good thus far! They’re usually friendly older folks living out in the suburbs, clearing out clutter from their garages and basements. Sometimes they’re selling their deceased parents’ things. I like to think I’m helping out, although I’m sure they’d freak out if they saw how many speakers and massagers were already in my car. A lot of times I ‘PPU’—porch pick up and leave money under the welcome mat—but a good amount of sellers have actually invited me into their homes.

JR:  Is the second-hand nature of the massagers and speakers conceptually important to the work?

RY: Definitely! I like to consider the history and life of the massagers especially. They’re meant to provide touch and comfort and healing. A lot also come with heat settings that warm the body, but eventually their owners decided they didn’t need them anymore.

JR:   It’s so interesting that these machines are supposed to provide physical comfort, but they don’t seem to satisfy expectations. This reminds me of your earlier work, in which you explore “material betrayal” and its implications for social constructs, like gender.

RY:   I like how we expect objects or appliances to work a certain way, but they often fall short, or even give up on us. Some sellers told me they’re selling the massagers because they upgraded to better versions—usually a chair or something more immersive—and so they’re kicking these dinky appliances to the curb. In a way they failed to serve their purpose or something about these crude rotating nobs didn’t quite simulate the feeling of human touch. I think it’s tragic and also endearing. They tried their best!

I think about the relationship between humans and automated objects or services. They’re servants, in a way, and that complicates our interactions. I have a friend who says “please” and “thank you” to her Siri and Google Home and I think that’s really sweet. I get frustrated when my Siri doesn’t understand what I ask “her” to do and tries to call someone in my contact list I haven’t talked to in a decade. The error in translation between object and person results in a betrayal of expectation. So although these massagers in a way failed to do the job, I like to think of my work as liberating them from their expected function and letting them dance awkwardly and do their own thing.

JR:  Your kinetic works resist the fixity of sculpture. How did you come about to think of assembling these individual pieces into an installation?

RY: I feel self-conscious about this, too, because they were not made to be sellable works. Or, at least I can’t think of a lot of people who would want a sculpture that makes slapping sounds in the corner of their living room, possibly knocking cups over and harassing their pets. They need space, and in a way they really carve out that space for themselves with their haphazard movements.

I really wanted to pursue staging the works in relation to each other as well. When you spend time looking at them, they really start to develop their own personalities. One might look like that guy who stands in the back of a show and taps his foot and nods his head to the music. Another one whips around sloppily and bashes into another piece. Another piece will have a pair of flowers that get entrapped and sway in sync like they’re slow dancing and making out and doing their own thing.

JR: Do you think these objects—whipping, bashing, and dancing under disco lights—create a queer space?

RY: Totally! The work actually stems from my discomfort in queer spaces. I was raised really religiously, which made me really uptight and anxious, so entering these kinds of spaces portrayed as liberating for queer people was really difficult. Like a lot of people, I grew up in a home where there wasn’t a lot of physical or verbal expression of love.

Strangely enough, I saw a lot of that suppressed expression come out in church. My dad, the pastor, led intensive group prayers where church members were shouting out, extending their arms, crying, shaking, etc. We’d turn the lights off and play loud music and people would really let loose. Even the most stern and reserved people used this time and space to liberate themselves and their bodies in ecstatic movement. I found that this mode of expression doesn’t actually differ that much from people moving on the dance floor or thrashing limbs in a mosh pit. So this show is a way for me to reconcile these vastly different worlds while also thinking about how my own body existed in those spaces.

JR: How did the sound element of your project come about?

RY:  The sound element really came from being present with the work in my studio. My studio mate was playing guitar with an amp and my sculptures just happened to be running. We both looked at the work and were like, “huh, it totally needs music,” which is how I decided to incorporate dance music. It just fits perfectly. At a later point, I realized how much these sculptures not only danced, they shook and swayed violently like the church members I grew up with, which is how I decided to incorporate sound from various Korean church services. I’m working with a local musician to create the dance tracks and will stage speakers throughout the show that play the service music.

Featured image: Rachel Youn in their studio. They sit in front of untitled works comprised of massagers, artificial plants, and speaker cabinets. Photo by Krista Valdez.

Jack Radley is an artist, writer, and curator. His writings have appeared in Berlin Art Link, Boston Art Review, Northwestern Art Review, and Temporary Art Review, among others. He lives and works in St. Louis.