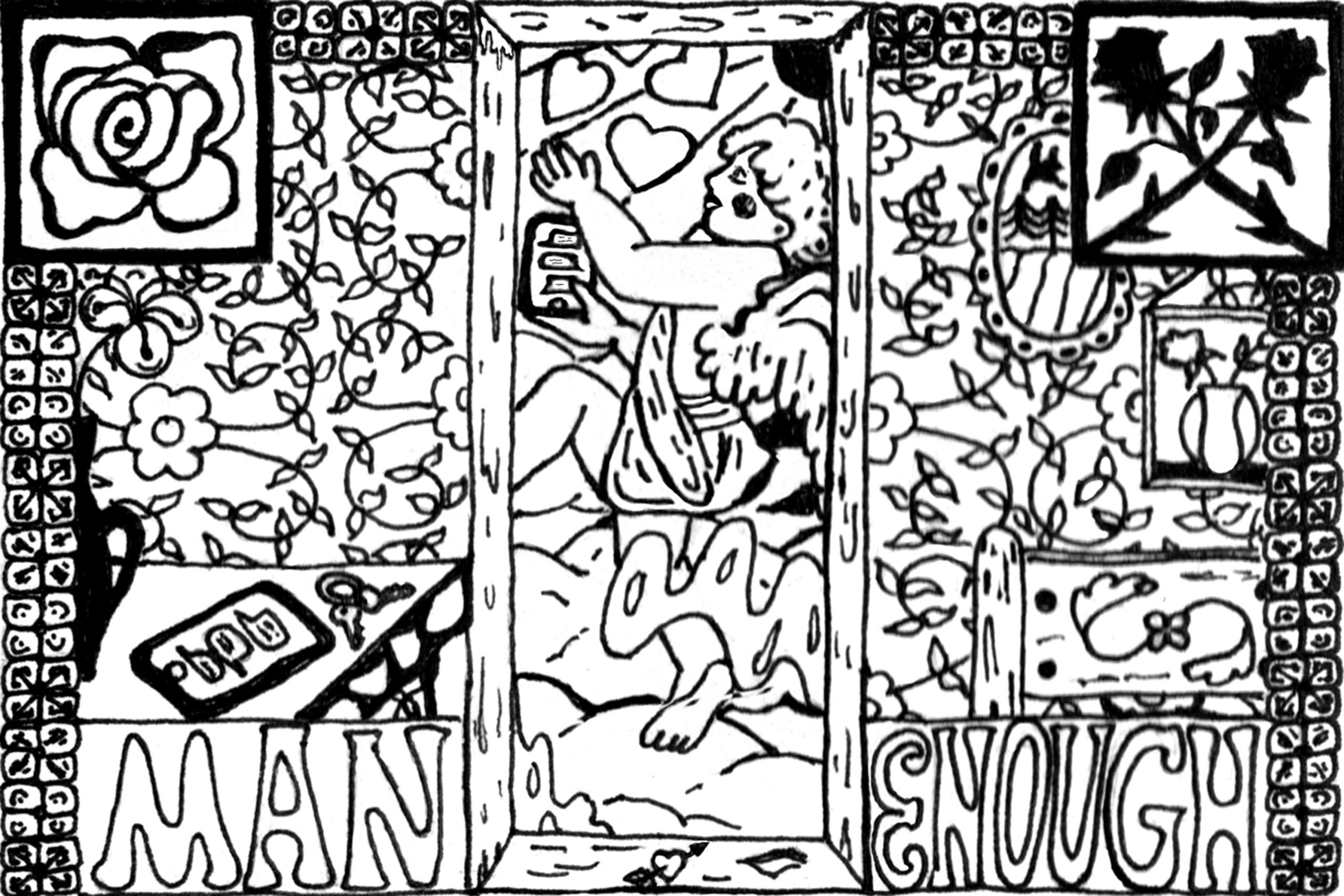 It’s funny, when I told everyone I was trans, in some ways, I was free. It felt like something that had been on the tip of my tongue for years. When I came out, no one was really blindsided by the news. But what was a little surprising was how many more challenges came my way after I did. I’m sure you’re probably reading this and thinking, “You thought being a gay trans man was going to be easy? Do you live under a rock?” I guess I just didn’t really have much to go off of. Most of the trans people I had ever seen in the mainstream were trans women. Any trans man that I had ever encountered growing up was straight. As naive as it might sound now, I didn’t even know that gay trans men were really a thing until a couple years ago. There’s no rule book that anyone hands you one day that tells you how to do this; as someone so newly out of the closet, I could literally fill a book with things I didn’t and still don’t understand.

One of the biggest unforeseen challenges became apparent immediately: the idea of dating gay men. I used to tell myself pre-transition that I’d already been dating men for my whole life, so this wouldn’t be too different. However, those were straight men. Despite having a lot of gay cis-male friends, I’d never even thought about the dynamic of dating them. Leaving the straight world of dating and stepping into the gay world was incredibly intimidating. You get on Tinder and see a bunch of pictures of cis white muscle gays in Speedos and think, “Even on my best day I am never going to look like that, or be looked at by anyone who looks like that.” The internalized transphobia also screams at you that a gay man is always going to prefer someone with a penis, or that you may never find someone. Not to mention I now had to learn how to do a whole myriad of new sexual techniques; it felt like being a born-again virgin. One of my friends suggested that it was mostly the same basic ideas, and that’s true, I suppose, but there were still so many question marks. Me eating ass? I’m a short guy, so would there ever be tall men who would let me top them? How would I gain this experience without embarrassing myself? Would I have to tell everyone that I had no idea what I was doing? It was enough to make me consider just throwing in the towel on my love life all together.

Even now, as I’ve gotten more comfortable, I still find dating to be tedious and discouraging. Although people will hit me up on Grindr to hook up, Tinder and Hinge have very little interest. People are interested in sleeping with me, but none really seem that interested in dating me. I keep telling myself that the farther I get into my transition, the more likely people will be interested in me–but it feels very hollow. The idea that people will only be interested when I look more like a “traditional” masculine guy, complete with facial hair and muscles, feels like I’m admitting that I’m not good enough. Every time I imagine myself after top surgery or try to picture my face looking differently, am I implying that I don’t like who I am now? I’m not saying that it won’t be really cool to look back one day and see how far I’ve come. However, I want to come to terms with the idea that even if I hadn’t physically transitioned, or even if nothing about my appearance changed, that I would still be worthy of love. It seems like everyone is held to such a high standard in the community because being gay was and still is rejected by the mainstream, so no one wants to draw any more negative attention to themselves. But it also feels like I’m closer than I’ve ever been to finding love. When I wasn’t living as my truest self, anyone I would’ve ended up with wouldn’t really have been the one for me.

But still, it sucks. Almost every single trans person I know is in a happy, long-term relationship. And I know what you’re thinking, that should give me hope, right? It doesn’t. I never get Hinge or Tinder matches–I’m talking maybe six total across both apps over a two month period. Before, when I identified as a girl, I thought I didn’t get many matches. Now, I’m realizing that getting three a day was a luxury. I wish that it didn’t hurt my feelings so much. It’s not that I’m even desperate to be with someone; I LOVE being single. It just feels so invalidating, like I’m so weird or hideous that not even one person a day looks in my direction. I’m trying so hard to be confident and put on a brave face for my friends. I constantly talk about my boyfriend of the future, or all the hot photoshoots we’re gonna have. The truth is, sometimes I don’t even want to look at pictures of myself because I just feel it’s not good enough.

I don’t want to be all gloom and doom about dating, because in my heart I’m a hopeless romantic. I still believe the love of my life is out there. I know that I am good enough, and that there are people who will find me attractive at every step in my transition. I also know that my worth isn’t determined by how many people want to date me at any given time. But I think that cis people–whether they’re gay, straight, bi, pan, etc.–don’t realize how much easier dating is for them because of the stigma that comes with being trans. There are always going to be people that won’t give me a second look just because they see trans on my profile, and that’s something I have to learn to live with.

Something else that I live with every day is this idea that I haven’t “earned” being a man yet. It’s weird because, on the one hand, hearing someone call me she or her definitely feels wrong. Seeing my deadname makes my heart sink. I so badly want to be seen as a man. However, it’s been an adjustment getting used to he/him pronouns. At first, when my friends switched over and started calling me Gabe, there was a part of me that would internally cringe. Even though I knew that it was what I wanted, it felt like they were doing it out of pity for me as opposed to doing it because it felt natural. Thinking about myself as a man just didn’t seem right. It was like I had already spent my whole life trying to convince everyone I was a woman; I switched all the stories I would write from male characters to female. I deliberately bought women’s cut t-shirts. I made sure to always keep my hair long, and to only dare to do anything masculine when my other female friends were doing the same thing. So now, I am completely reversing course.

Part of it is the idea that if you stick with a story long enough, you start to believe it yourself. I went so hardcore into convincing myself that I was just a “normal girl”, that I had bought it. I was comfortable with my place in the world; sure I was a little butch, but by the time I had finished college, it didn’t seem like anyone doubted me. But there was always that tiny voice in the back of my head that said the pieces didn’t quite fit. Eventually, I came to terms with the fact that I was trans. In a lot of ways, though, my body still doesn’t believe it. I look in the mirror some days and think, “Well, look at that sexy man!” and other days I can’t even bring myself to look, because it feels like I’m still so far from where I want to be. So when the guy at Starbucks calls me “sir”, but the Doordash driver says “ma’am” (even though I put Gabe on the order), I don’t know which one really fits me. I’m so clearly not in the woman camp, but it almost feels like I have to justify my manliness to the world.

The idea that there is only one way for a man to act, or that I have something to prove in order to be a man, seems silly. On its face, the concept is simple: I was always a man on the inside, and now I finally get to let people see that on the outside. Yet, the inside has turned into a mess. Some days I think I act too masculine to be taken seriously by gay men, but then when I act feminine I wonder if people think I’m not actually trans. The shades of gray have such a dizzying effect that at times, I wish I simply did not exist. Not so much that I want to die, but just that I wish people just understood me from the jump. I wish I could walk out my front door and people would know exactly who Gabe is. I can’t blame strangers for making assumptions when they don’t have any backstory; we all do it all the time. But it still hurts, it feels like I’m stuck somewhere in the middle where I don’t want to be.

All of this to say that I know these feelings won’t last forever. I know one day twenty years from now, I’ll have a partner who makes me happy. I know I’ll be exactly where I want to be in terms of my transition, and I’ll be comfortable in my masculinity. If I found a way to be okay with myself (mostly) as a woman, I have no doubt that I’m going to find my way as a man. I also know between now and then I’m going to have a lot more struggles, some I probably haven’t even considered yet. In some ways it’s comforting to know this, and in some ways it sucks. Being so new to this, it feels like I’m on an island. All my trans friends are farther into the transition. I’ve basically just started. I wish I could skip ahead.

Until then, I’m trying to make the most of this time. I’m trying to get to know all of the parts of myself, even the parts that scare me or that I tried to ignore. I’m learning that’s the only way to live.

Featured Image: A black and white illustration of vines that sprawl around a doorframe in the middle of the composition. In the top left corner is a rose and beneath it is a table top with a pair of keys, a phone, and a vase. In the top right corner is an ‘X’ made from two black roses. Beneath is a vase with flowers. In the bottom left and right corners are the words “MAN” “ENOUGH”. Through the doorway is cupid on a phone. Image created by Jess Cadwell.

Gabe Gerdes is an aspiring screenwriter, novelist, and poet. He is currently writing a memoir about his transition, as well as a screenplay titled Running, loosely based on his first couple years post-college. When he’s not writing, he enjoys cooking, watching baseball, and reading. He currently lives in Wicker Park with his cat Cricket.