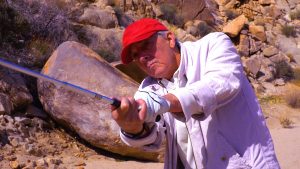 IMAGE: Jonah King, How the West was Won, 2018. A still image taken from the video, How the West was Won. An older man in a white shirt and red hat tilts his body to the right and holds a golf club up and away from his chest as if he were pointing to or measuring something in the distance. His face looks like he is concentrating and he gazes in the direction of the raised club. A hill of rocky boulders rises behind him. Image courtesy of Jonah King.