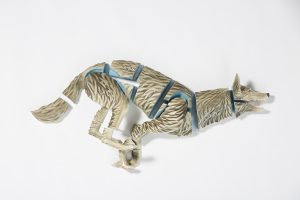 Emmy Lingscheit, Canis Latrans Subdivision I, cast vitreous china, glaze, dimensions variable, 2015. A sculpture of a wolf seen from the side, face to the right side of the image. The wolf appears to be running, its four legs together coiled in potential movement. The sculpture consists of several pieces that are slightly spaced apart. The fur of the wolf is glazed in brown-gray and whites. The areas of the sculpture that should be touching are glazed in blue. Photo courtesy of Emmy Lingscheit.