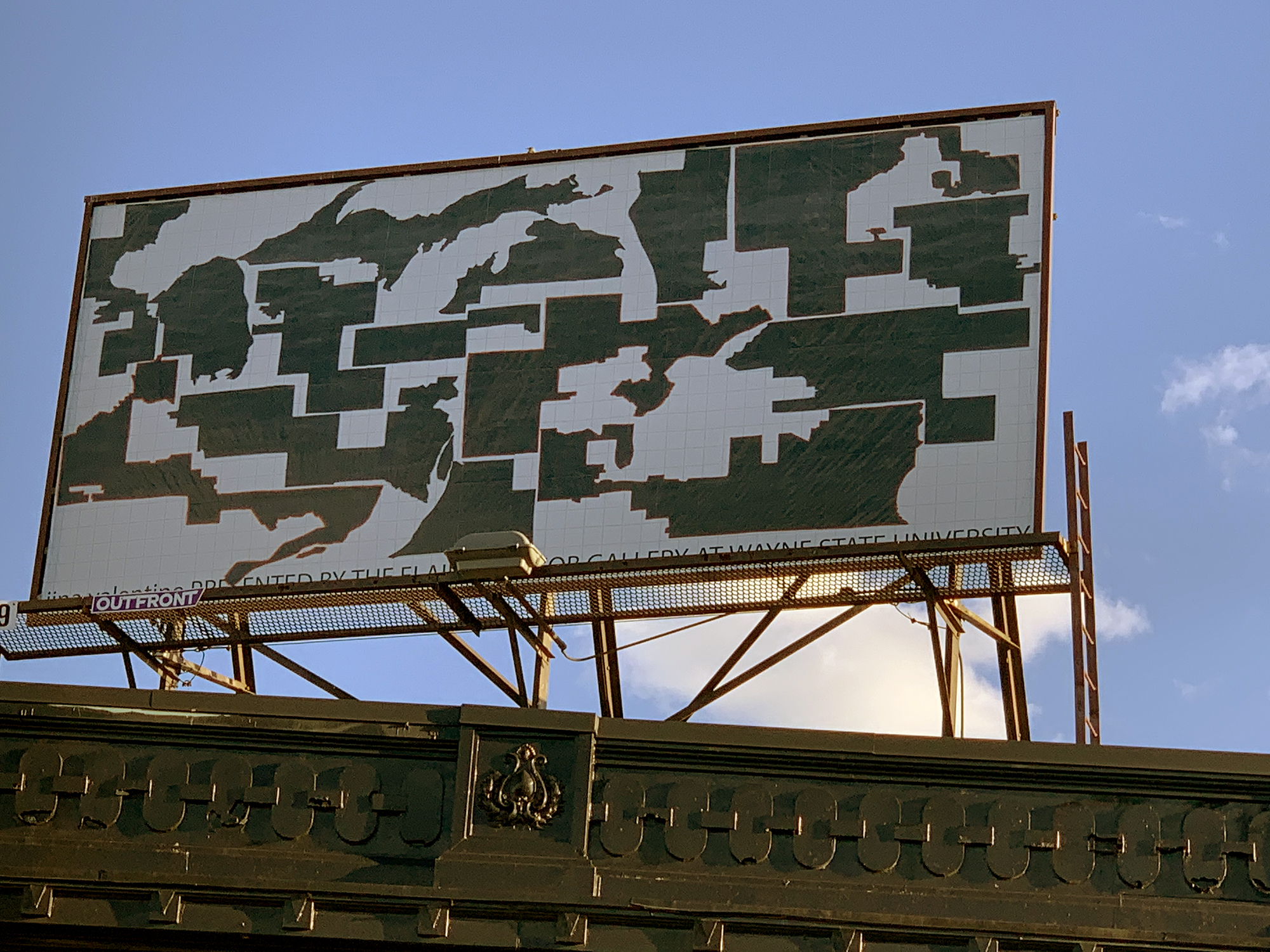 Featured Image: A billboard installation by jina valentine atop a building in Detroit, exhibited at Wayne State University as part of the IN THE AIR: VOICES FROM DETROIT AND BEYOND billboard cycle. This work, shown during the months leading up to the 2020 elections, is a reconfiguration + rescaling of Michigan’s voting districts. Image courtesy of the artist.

How do I remain invisible to the archive? Can I tread lightly enough as I pass through it so as not to disturb its contents or their present (dis)order?

Sourcing materials activates archives. The act of researching and referencing breathes life into objects in stasis. Calling collections as encantations. Speaking, singing the archive… I think I want to whisper into it.

Am I myself a haunt within the archive? Or am I haunted by its contents and implications?

If I am in the business of animating archives and I want to create systems for re/animating the archive’s contents… does my process (of research, synthesis, fabrication) constitute the creation of algorithms?

How do I reconcile my critique and mistrust in algorithms (with all their inherent systemic biases) with the aspiration to function as an algorithm myself?

How do I perform (in the service of, as violence to, as cipher for) the archive?

As conduit between archives, I endeavor to provide a(n invisible) bridge between data, between meta categories, linking narratives–open, as a tableau, upon which they might mingle and form new connections–and meanwhile, leave no trace. Can I perform as medium, as milieu, connective tissue, undetected?

How do Why must I remain invisible to the archive? I remain unseen, mispronounced, misquoted, discarded, untended, corrupted, missing metadata and thereby undiscoverable.

If my provenance is truncated and I am forever absent verifiable primary source material (e.g. recorded family lineage) as my proof of existence, how can I be valid, how can I be credible?

Within a web of Linked Open Data, can my hyper-relation to disparate (and ultimately unrelated, in my mind) topics diminish my findability? I am omitted from finding aids.

Do I aspire to Archon status (gatekeeper, caretaker) in relation to the archive ? No. If anything, I am inviting everyone in. Public librarians are also social workers. Consider who frequents the public libraries in this city, what resources we seek (knowledge, internet access, community, warmth, refuge, public toilets).

I wonder who witnesses and who records what is said in hush arbors? Who safeguards those records? And who is granted access to them?

Text threads amongst community organizers (read: activists, anti-fascists, anarchists, anti-capitalists, all those who openly critique systems of power and oppression) are invaluable archives of and testament to the beautiful messiness of collaboration and vision work. How can we preserve these histories (while protecting those who speak (out))? How can this work — these conversations, collaborations, actions — be documented and fully validated if it is impossible to credit those doing the work? if it is impossible to give a full account? if it is impossible to properly cite the source? Protect the source, compromise credibility. Protect the witness, abstract the voice of the testimony.

It is admittedly with great difficulty that I am writing this, this text on research in archives, humanizing data collection + representation. My practice intends to humanize data visualization, by generating compassionate associations with the communities who are subject(ed) to those data and the ramifications of their narrativization. I am troubled by the fact that despite the archive’s refusal to see me, I cannot not (help but) recognize my own hand (biases, narratives, experience) in my efforts to animate it.

I work primarily with found materials. Found objects arrive to my studio world-weary and ripe with their own histories, use values, associations, past lives… they have their own agendas and communicate their (dis)interest in engaging in collaborative formation of (new) meanings. Found text (mis)appropriated, (mis)translated, re/de-contextualized, weaponized… (The Author is not Dead). Texts point back to the author/s (see: Debord On the Subject of Stolen Films).

I work with found data. Found data — what does that even mean? Data visualizations, data sets, point back to the object/s of study… they point to various phenomena, and not to the collectors or presenters of those phenomena. “The data tell a story.” “They are self-animated.” They are presented as objective proof, for the purpose of validating others’ stories.

Working with found data considers the provenance of data sets, the methodology used in collection, the primary agendas of the researchers and authors in animating the data, what larger stories (historical political agendas, pop cultural trends, global issues, social values…) informed these processes?  And what other narratives have these data and those authors supported?

I have always made work with found materials (recycled paper, already printed-on, fabric scraps, miscellaneous detritus from the alleyway), found texts (borrowed prose, redrawn news briefs, hand-copied executive memos), found data (Census, NASDAQ, IPUMS, Farmers Almanac…). I reconsider the notion of “found.” Etymologically, “to find” means to retrieve something lost, but also to be situated, to deem something so, for something to be the case that… suggesting a search for, a study of, and a determination or judgment concluded.  The task of finding is subjective, situational, and personal.  When we think about found object artworks, there’s often this assumption of objectivity both on the part of the artist and the object/s “discovered.” The artist, in all his genius, happened upon materials that spoke to him. The artist made these materials speak for him. Perhaps a decolonialized strategy for working with found objects entails acknowledging that the task of finding is in itself deeply personal, biased, and is bound up in the agendas of the person doing the searching in the first place.

I’ve always considered work with found objects one of negotiating with an inanimate interlocutor. Individual objects have their own lived histories, use values, presences, auras—they are already speaking and arrive with their own agendas. Working with findings entails negotiating and collaborating to form new meaning beyond what we could achieve independently.

I’ve not previously assessed the degree to which my own hand, intentions, agendas predetermine which objects I “find,” (findings include data, text, physical objects). Considering the implications of working with “found data,” (and considering the bias at play in animating the world of Big Data via algorithms functioning in the service of capitalism, the surveillance state, and created largely by a non-diverse tech industry fraught with allegations of sexism, racism, and homophobia) I cannot not acknowledge my own hand in selecting found materials.

I’ve always considered my work site-specific, in that the texts and objects found in a place or space are tied to those origins. Working with found data, from online sources, the site specificity is temporal, institutional, governmental, or sociopolitical, related to a particular study or cause.

My work exists in parasitic relationship to those archives: at once mining from the contents and building new archives out of the findings. What’s found, previously specific to those sites, is repurposed, resituated, and reanimated by way of new systems, new algorithms–my current curiosities and inquiries, and understanding of my positionality in relation to the subject/s researched.

The problematics of the current work — notes on a project currently underway:

Irenewe Wa: she speaks the regular way is a public artwork in production for installation at O’Hare Airport this summer. The work illustrates the shifting demographic of the area that encompasses what is now called Illinois, over a 200-year timespan (from colonization, settlement and ratification, up to 2040) via demographic data visualized as decade-by-decade scatter-dot charts. Each chart bubble (or “disc”) represents a percentage increase in immigration to the region by country of origin–with the exception of Black people migrating from the South, and Indigenous peoples staying in or returning to the region. Out of 650+ discs in this work, approximately 100 will be engraved with phrases contributed from Chicagoland community partners.

I am not trained as a data analyst, scientific researcher, demographer, geographer or otherwise. I am however enamored of the simplicity and the clarity data visualizations project. These illustrations seek to make our complexities, messiness, nonlinear and intersecting narratives fathomable, accountable, counted. My practice (and here I mean as a maker, mother, educator, citizen…) is inspired, quite simply, by an insatiable desire to know, to understand. As my interests are far flung (read: I am no specialist!) I am drawn to these tidy illustrations of complicated phenomena, despite myself, despite my apprehension for linear narratives and conclusive statements. I am admittedly seduced by their concision and authority. The wanting to know more leads back here, to this discussion… to contemplating the flaws and failures inherent to data collection, organization, and narrativization. The desire to dig deeper inevitably leads to critiquing the very materials I’d intended to source. In self-consciously delving into archives, discovering systems (for naming, organizing, describing, sharing) I am ever aware that my own motives determine what is found–that the discoveries, the findings, what is unearthed, made visible, become legible are bound to me, as system generator, as algorithm, as animator of data.

jina valentine is a mother, visual artist, and educator. Her independent practice is informed by traditional craft techniques and interweaves histories latent within found texts, objects, narratives, and spaces. jina’s work involves language translation, mining the contents of material and digital archives, and experimental strategies for humanizing data-visualization. She is also co-founder (with artist Heather Hart) of Black Lunch Table, an oral-history archiving project. Her work has received recognition and support from the Graham Foundation, Joan Mitchell Foundation and Art Matters, among others.

Lion Cages and Lilac Fields: From Chicago Stages to Basements, Art, Work, and Other Pandemic Songs