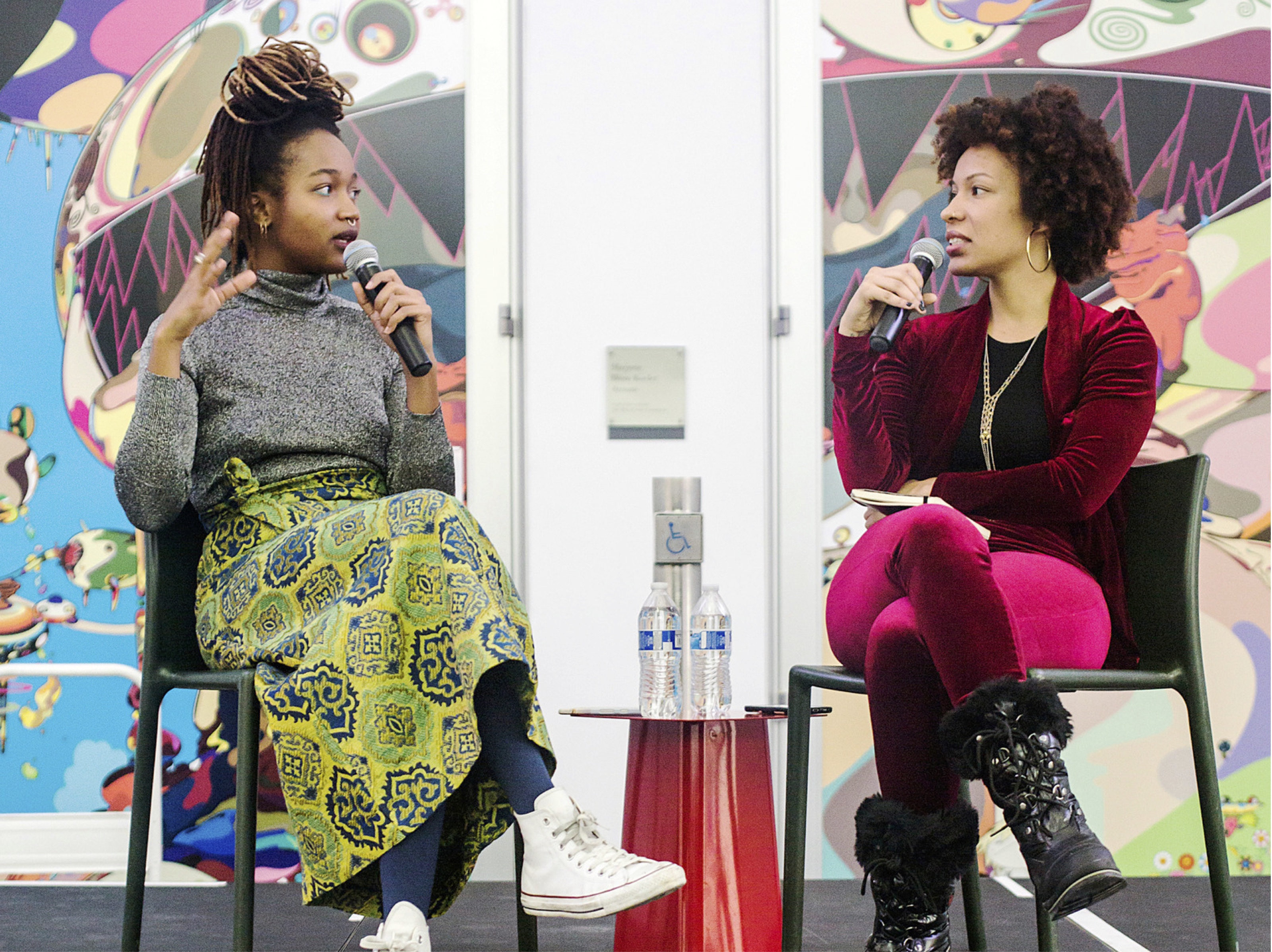 On a frigid December evening in Chicago, scholar and artist Rashayla Marie Brown shared the stage with Kimberly Drew, social media manager at the Metropolitan Museum of Art, to discuss race, social media, and representations of Black bodies in popular culture. Their unique personas and bold sense of style brought a strong presence to the Museum of Contemporary Art Chicago (MCA), filling the first floor of the museum with the luminosity of the Black female perspective in image-making.

They discussed a wide range of topics, from the lack of diversity in elite art institutions to encountering police brutality videos that are easily consumed online. Together, they examined social media platforms as a viable medium in the production of images that are impacting professions in the art world today.

“I want people to look at [this] cast of characters in my social media and think in more complicated ways—especially about artists of color—because I don’t know that we’re in a discipline that allows for that kind of imagination. And that’s what social media affords us—tapping into an idea, the gaze, a fantasy,” said Drew. As she passionately described, social media has granted artists of color the agency to become visible in the digital sphere. Technology has given them the ability to surpass the confines of the art institutions that have historically placed them on the margins of art history.

But, as Drew expressed, this aura of empowering visibility in the virtual can sometimes exist as a mere fantasy. Early on in the conversation, Brown revealed the uncomfortable realities that can emerge when ideating online while Black and brown:

“Social media and the Black Lives Matter movement have changed the way we receive information about the most recent loss of life [in the Black community]. We’ve seen a lot of these videos that were created by a person who is not the person who ends up in their demise. The showing of these deaths started as a way to challenge what is happening, but it has ended up doing the opposite—it has created a spectacle.”

Their discussion framing police brutality videos online as a spectacle demonstrated just how closely social media and race have intersected over time. Brown’s compelling description revealed the trauma that can be induced when participating in the rapid production of digital information sharing. She showed how internet-users are active agents in publicizing police brutality videos, whether they are conscious of their role or not. “I do not watch all videos of police brutality, and I abstain from watching most of them. I try to stay aware of the victim’s names so that I can talk about the issues in real life, but I spend large amounts of time disconnecting from the internet,” said Brown.

As Drew and Brown touched upon, the summer of 2016 caused social media users to witness the rapid transformation of the function of internet sharing–it started as a politically neutral social networking tool to a vehicle for social justice and protest. Police body cameras and Facebook Live, a live video streaming platform that showcases video posts in real time, were crucial in the cases for the late victims of Alton Sterling, Korryn Gaines, and Philando Castile. Through pertinent questions like “does visibility automatically assume a sense of empowerment?” and “what does it mean to remain visible, even when you don’t want to be?” Drew and Brown problematized the function of social media as it relates to the experiences of people of color.

Drew, from a slightly alternate perspective, illuminated that while the process of viewing police killings can be traumatic for the communities represented, video technology has simultaneously aided victims in moments of crisis with law enforcement. While gruesome, she stated that these videos can serve as “evidence that these stories are bearing the weight of needing to be told. It’s a sad brilliance when people have to rely on these sorts of realities to say, ‘This is what happened, this is the truth.’”

Her thoughts on police brutality videos online uncovered the inherent paradox of being an active agent in encountering and sharing the visualization of Black death in the virtual. Drew encapsulated the act of sharing police killing videos online as having to navigate the “politic of being indigestible.” As she suggested, people of color often bear the burden of have to remain conscious of the most recent police brutality video on the internet, even if it is physiologically triggering.

Brown aided this statement by claiming that the shareability of images on Facebook and Twitter showcasing social justice violations against Black bodies, has placed Black pain in a format that is ready for consumption. As a performance artist herself, Brown brought up the concept of the performativity of Black life in the digital sphere and the politics surrounding representations of marginalized communities in times of political turmoil. “I do think social justice themed posts are a type of performance. That’s not to say that performance is bad, false, fake, or simple.” People look on from the galleries during the conversation between Drew and Brown at the MCA. (Photo by Reginald Eldridge, Jr.)

Drew similarly understood image-making through social media from the lens of art, and pointed toward the opportunity it has given for people to gain control of their own image:

“Social media can be seen as a vehicle for better visualizing Black pain, or, it can be seen as just a different way of performing it. And, yes, sometimes that shit is difficult. But now, it’s just our way of saying, ’Hey, this is what it looks like from this side of the table.”

This idea of constructing public and private selves on social media platforms was interweaved throughout the entirety of the discussion. Brown particularly described the uneasy feeling of an eternal public gaze being present through social media platforms as “double-consciousness on steroids.” She claimed that “social media makes us look at ourselves from other people’s perspectives constantly.” Her clever application of Du Bois’ famed concept of double-consciousness, the internal conflict of “always looking at one’s self through the eyes of others,” brought a classic theory in Africana studies into the contemporary moment. “It creates an anxiety that causes one to compare themselves to others in a perpetual cycle, detracting from a person’s ability to be present with a piece of work,” said Brown.

Their ability to delve into matters of social justice from both a collective and individualized frame of reference allowed their conversation to have a dynamic balance of art and politics. Brown and Drew broke down the essence of what makes the medium of social media so compelling in our era–it constructs a user’s relationship to authorship and agency, yet still cannot erase the hard truths of race relations in America.

“These incidents are not isolated occurrences. Social media is simply a platform that has been a means of visualizing Black pain, and a more nuanced way of performing it,” says Drew. “We now have concrete realities that can be documented and archived–social media just allows us to react in real time.”